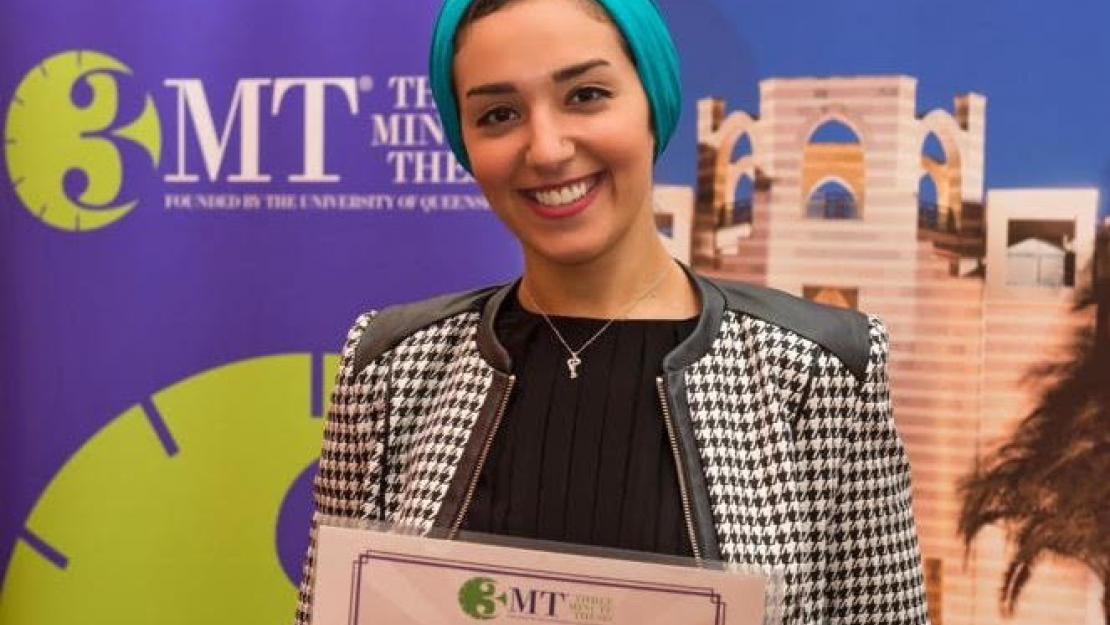 “We’ve all heard the phrase, ‘No pain, no gain.’ However, in my thesis, I’m trying to prove that this is not always true,” said Lobna Mourad ('07, '11) in her winning presentation at AUC’s first Three Minute Thesis (3MT) competition.

A doctoral candidate in AUC’s biotechnology program, Mourad aims to find new ways to diagnose liver cancer, detecting the disease in its earliest stages while minimizing the pain of traditional tests.

“I’m hoping to use these small molecules circulating in our blood called MicroRNAs or miRNAs,” Mourad explained. “They are called by scientists the masterminds of the genome because they have this amazing ability to control our genes and genomes.”

Because liver cancer changes the level of miRNAs in our blood, these molecules can be used to detect liver cancer. “miRNAs are found in the blood and in the liver as well, and their expression level varies depending on whether the patient has liver disease or not,” Mourad explained. “Therefore, if the levels of the liver-specific miRNAs are measured and compared against the standard normal levels, that can be used as a diagnostic test for early detection of liver cancer.”

Mourad believes that these simple blood tests could replace traditional testing like liver biopsies. “The idea behind ‘no pain’ is that such a simple blood test would save the patient the hassle of going through a biopsy in order to confirm the presence of liver cancer,” Mourad noted, adding that blood tests minimize the risk and pain of biopsies while also allowing for earlier detection of liver cancer.

This research is especially important for Egypt, which has the highest infection rate worldwide of hepatitis C, a disease linked to liver cancer. “One in 10 people living in Egypt is infected with hepatitis C,” Mourad pointed out. “It has literally affected every single family in the country, and one of its nasty side effects is the patient developing liver cancer.”

Developed by The University of Queensland in 2008, Three Minute Thesis, or 3MT, is an international research competition for PhD students in different parts of the world. Contestants are asked to explain their research and its significance in three minutes to a panel of judges in a language appropriate to a non-specialist audience. The judging panel then chooses a winner and runner up, while the audience chooses a winner. The video of the winning presentation is placed on the official 3MT website hosted by the University of Queensland (To watch Mourad’s presentation, click here). 3MT began in 2008 and is held today at more than 170 universities in 18 countries worldwide. The competition was held at AUC and Egypt for the first time last year, organized by the School of Science and Engineering PhD program.

"Lobna used her three minutes and one static PowerPoint slide to communicate the significance of her research very efficiently," said Amal Esawi, mechanical engineering professor, associate dean of graduate studies and research at the School of Sciences and Engineering, and director of the PhD program. "She managed to capture and maintain the attention of the judges and the audience," added Esawi, who initiated the 3MT competition at AUC last year.

For Mourad, making science accessible to everyone is as important now as ever before. “Science is fascinating,” she said, “and the research being conducted all over the world these days is beyond anything we have ever dreamed of. However, it can get really technical and difficult for everyone to understand. Therefore, simplifying the essence of our research is crucial for the general public to be included and informed about new technologies and groundbreaking discoveries.”

By sharing her research, Mourad hopes to help in the fight against cancer. “It’s very important for me that people are aware of my research because it opens possible future advances in the field of liver cancer diagnostics,” she said. “This is a disease that has caused a great deal of pain to millions around the world.”

Since the competition, Mourad has been busy working on the lab component of her research with her thesis supervisor, Suher Zada, a professor of immunology in the Department of Biology. Mourad has also presented at conferences in Berlin and Paris.

Beyond her own research, Mourad hopes to inspire in others a passion for science and research. “I always hope that by explaining my research and what I am trying to achieve, I will motivate and encourage young future scientists to do the same, like I am motivated by my teachers.”