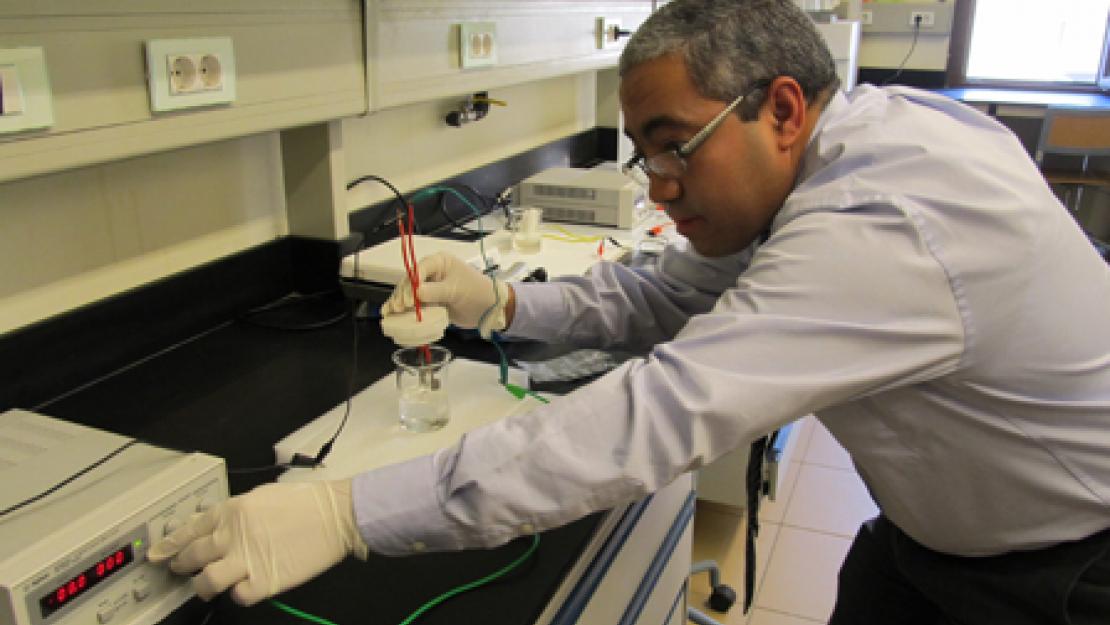 Nageh Allam, assistant professor of physics, recently received the Egyptian State Award in Technological Sciences from the Egyptian Academy of Scientific Research and Technology for his research on ways to create “smart energy” to produce renewable fuels and electricity from sunlight on a sustainable basis. This highly competitive award is only given to two individuals who are at the top of their fields.

“We are extremely proud of the excellent work that Dr. Allam has done and wish him more success to come,” said Ehab Abdel-Rahman, associate provost for research.

To obtain this award, national and international committees judged Allam’s research for its scientific and societal impact. Allam’s contribution to national and international projects and his previous achievements were also taken into account. Allam was excited to receive this award and quick to acknowledge the support that AUC provided for his research. “With a very generous donation from Dr. Haroun, the previous provost, and space given to me by Dr. Omar, chair of the physics department, we started building the small energy lab two years ago,” Allam said.

At his energy lab, Allam researches methods for converting solar energy into electricity and clean fuel. He also conducts research on bio-compatible materials, water treatment and energy efficient desalination. Moreover, he recently received a grant from the Qatar Foundation to research methods for converting carbon dioxide into fuel. “We published a very good number of papers in international journals,” he said. His work has been published in the Journal of Applied Physics, the Journal of Nanomaterials, the ACS Nano and several others. Through his lab, Allam also hopes to provide undergraduate and graduate students with the proper skills to become competitive in their fields. When Allam found out that two of his graduate students were recently accepted into the Georgia Institute of Technology and the California Institute of Technology, he was “very happy” because he wants to see more Egyptians represented in these schools. “This is a reward, I can tell,” he said. He is also one of the few professors who has undergraduate students working in his lab. He hopes these undergraduates can garner solid research skills that can make them competitive applicants at research institutes. “I hope we can expand and get more students involved,” he said. But Allam’s impact goes beyond the lab. He hopes to serve the community by using his research to help solve Egypt’s water and energy issues. Allam recently received a small grant to research ways that solar energy can be used for desalination. This would allow water availability to increase in Egypt through sources like the Red Sea and the Mediterranean. Allam has several goals for the future. “I really hope we can establish something like a world-class institute,” he said. “I hope we can collaborate with people from inside and outside AUC to establish a solar energy lab” to address Egypt’s endemic energy problems. “If you look at the area here, we have problems with energy, but still have our sun,” he said. Allam hopes to bring inexpensive energy solutions to Egypt by using untapped resources like solar power. “We can solve these problems and can contribute to society in a very cheap way.” Allam joined AUC in 2011. He received his PhD in materials science and engineering from Pennsylvania State University. Shortly afterward, he worked at the Georgia Institute of Technology and then joined the Research Laboratory of Electronics at the Massachusetts Institute of Technology. He is the recipient of the Ford Foundation International Fellowship, the RAK-CAM Postdoctoral Fellowship and the Misr El-Kheir Award for the best publication. In 2009, Allam was nominated by the International Biographical Center, Cambridge, England as one of the top 100 scientists in the field.