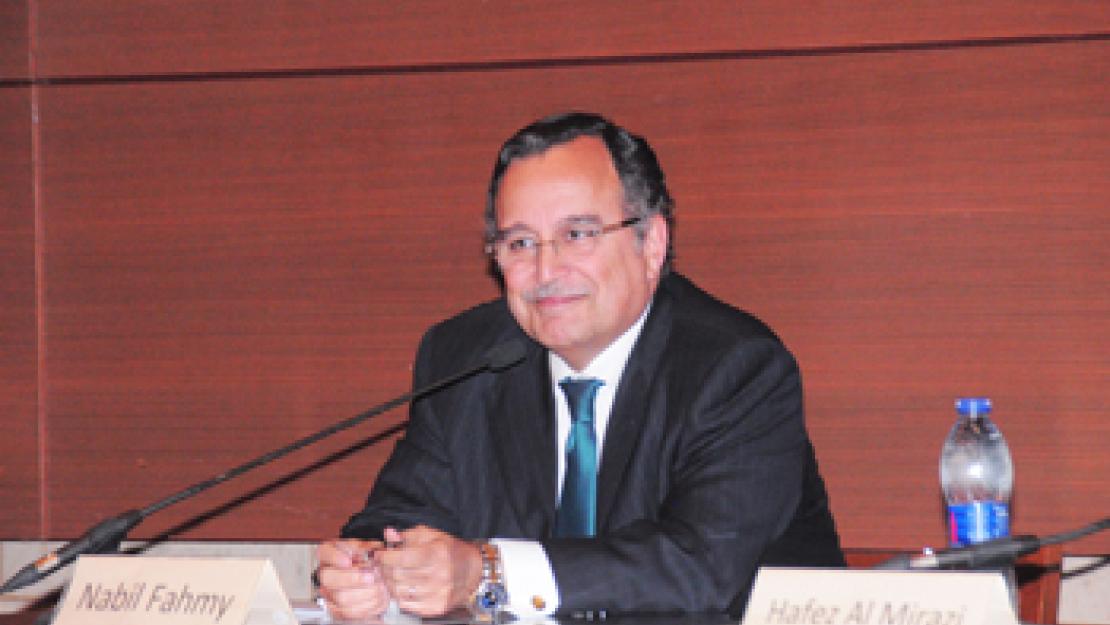 “There is no doubt that we are witnessing a birth of a new Egypt,” said Fahmy to a full-house of attendees at AUC New Cairo on Monday, March 3, including AUC students, faculty and staff, as well Nadia Younes’ family members and friends. “Egypt needs to shape the regional environment … its leadership role is not a choice or the luxury of national pride, it is imperative for a better future,” added Fahmy, who emphasized Egypt’s position as the intellectual beacon of the region.

Fahmy identified three goals for Egypt’s foreign policy: defending the revolution in its larger sense; making the center of gravity of its foreign policy the Middle East and Africa; and preparing the foreign ministry for the future. According to Fahmy, the main challenge Egypt is facing is enacting reform in a democratic setting that still resonates with revolutionary fervor. “A fundamental restructure of Egypt requires elements of continuity and of change, and Egypt must diversify its portfolio of strategic economic relationships,” he explained, adding that the overriding strategy for Egyptian foreign policy is closely related to Egypt’s economic needs and political priorities.

A close friend of Nadia Younes, Fahmy was the founding dean of AUC’s School of Global Affairs and Public Policy (GAPP).  When asked if he can compare his job as dean of GAPP and that as foreign minister, Fahmy explained that in both situations “he was tasked with building something.” As dean, he was challenged four years ago with a new environment, where he had to build an entire school. As minister, he was “handed the job at a time when Egypt is trying to redefine itself. The world is changing and we have to determine our foreign policy.”