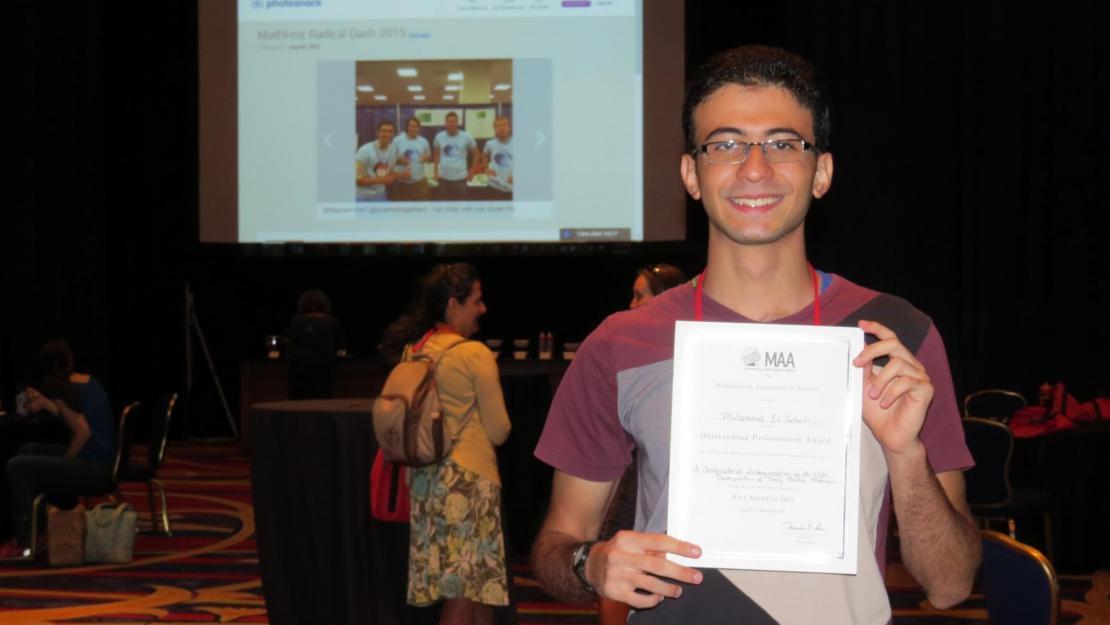 When Muhammad El Gebali, electronics engineering and mathematics senior, was in high school, he discovered his passion for mathematics after taking calculus classes. He came to AUC eager to broaden his knowledge and challenge his learning capabilities. Today, El Gebali is the first AUC student to participate in the annual Mathematical Association of America (MAA) Mathfest conference, which took place in Washington, DC in August 2015, where his team ranked first in the event competition and he won the Outstanding Presentation Award for his research.

“I was chosen among 140 undergraduate presentations made by more than 200 students, mostly from universities across the United States,” said El Gebali, who is a recipient of the Yahiya Arafa Endowed Public School Scholarship from AUC. “It’s a positive feeling that can’t be described and an achievement that I wasn’t expecting.”

The MAA Mathfest conference brings together undergraduate and graduate students, who are selectively chosen to present their research work and solve mathematical problems using calculus, algebraic and geometric operations. El Gebali actively participated in the conference by joining the Radical Dash team, “a daily scavenger hunt filled with math challenges and creativity for teams of undergraduates,” as described on the conference website. His team, which included students from South Carolina and De Sales University, ranked first place with 102.5 points out of 103. El Gebali was also individually recognized with the Outstanding Presentation Award for his research paper titled “The Combinatorial Interpretation of the LDU Decomposition of Totally Positive Matrices.”

El Gebali’s choice to attend the conference was inspired by his strong desire and keen interest to challenge himself. “I get frustrated if I don’t challenge my knowledge,” he said. “What I love about mathematics is that it’s a path [where] you reach from one fact to another,” he said.

Nermine El Sissi, assistant professor in the Department of Mathematics and Actuarial Science who has been supervising El Gebali’s award-winning research, testifies to El Gebali’s dedication and enthusiasm for math. “Muhammad’s passion for mathematics is the catalyst for producing original research work in this field of study,” she declared. “Attending his presentation made me realize that mathematics is a language at which he is fluent. His talk was vivid, and everyone at the presentation was attentive and interested. It has been a great pleasure to work with such a talented, determined undergraduate student who is able to conduct research in a professional and pleasant manner."

El Gebali’s ambition to succeed and become successful is evident through his leadership roles at AUC. He is currently the technical director of the Robotics Club and the development director for Khatwa, a community-based student club that promotes science and technology knowledge to individuals from underprivileged parts of Cairo. He is also a member of the Electronics and Communications Engineering Association, and was a project manager for the Community of Scientific and Technological Activities student conference last year.

At the MAA Mathfest conference, El Gebali was commended for his exceptional talent at mathematics and was encouraged to apply for different scholarships to attend graduate school in the United States. And that’s what El Gebali plans to do. His aim is to attend graduate school in the United States or Canada, and become a professor. “I would like to have a research position at a university,” he said. “I also recently discovered that I’m interested in philosophy, so who knows what field of study I will choose to follow in my career.”