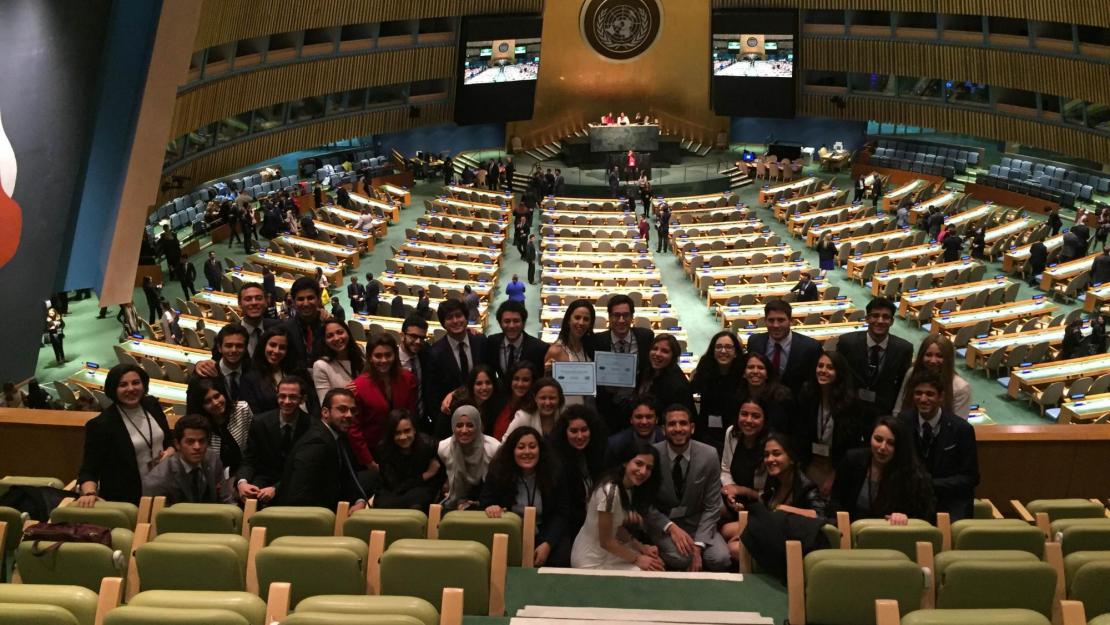 CIMUN: A Legacy of Success

Two Cairo International Model United Nations (CIMUN) teams, made up of 39 AUC students, competed in New York. One team represented the Republic of the Congo, and the other represented Tuvalu, a small island in the Pacific. Delegations were sent from 500 universities from the United States and several international universities, totally more than 5,000 student participants.

Every year, the top delegations are honored with awards in three categories; Honorable Mention, Distinguished Delegation and Outstanding Delegation — the most prestigious award. Not only was the AUC delegation representing the Republic of Congo named the Outstanding Delegation this year, the smaller team acting as Tuvalu was given the Distinguished Delegation Award. In addition, AUC was honored with a committee-specific Outstanding Delegation Award for the Commission on the Status of Women. “This makes AUC among the top five or six universities out of 500,” said Kazziha, professor of political science and academic adviser to the team. “It is great because we are comparing ourselves not only to regional organizations, but also to academic institutions worldwide.”

Mariam Ibrahim an LLM graduate student, CIMUN's graduate adviser and one of the head delegates, echoed the same sentiment. “The one thing that surprised us in New York was that every delegate we selected surpassed any and all expectations,” she said. “They worked with hundreds of other delegates in a variety of councils on a wide array of topics with the utmost professionalism and, in many cases, our students led blocs composed of more than 70 delegates.”

Delegates are placed in different committees covering topics like security, public health, sustainable development and the economy.  The goal of each delegate is to negotiate issues while staying true to the stance of the member country they represent. The delegates discuss, debate and negotiate, and must work together to write resolutions, which are voted for ratification.

Students who participated in the conference were assigned committees and the topics for discussion before they went to New York, so extensive research and preparation were key. “They did a very good job preparing themselves,” said Kazziha. “These students are mature, and they work very hard. I work closely with the students and deal with them as equals.”

Ibrahim and Ramy Mubasher, the head delegates and members of CIMUN's high board, vetted and hand-picked the AUC students who represented CIMUN. “Those 39 students we selected exhibit excessive passion, perseverance and an unparalleled academic edge,” said Ibrahim. “They are all excellent public speakers, have brilliant leadership skills and their trainings at CIMUN prepared them to write substantive resolutions at the New York MUN conference."

Ibrahim also pointed out that the benefits of CIMUN go far beyond the academic sphere. “We leave CIMUN as well-rounded individuals who are more than capable of discussing any political, social, economic or developmental issues in a diplomatic and objective manner,” explained Ibrahim. “We learn how to be open to a wide array of opinions and accept them regardless of how much they may vary from our own. We also learn how to articulate our opinions in a respectful and diplomatic manner.”

The students in CIMUN have already began honing the next generation of collegiate diplomats, organizing Junior CIMUN and Cairo International Model Arab League programs and holding competitions for high schools students. “AUC acts as a host for high school students from around Egypt, preparing young people so that when they come to AUC, they are already acquainted with each other and the University,” said Kazziha.

A League of Their Own

At this year's Model Arab League conference in Washington, D.C. 20 AUC students from the Cairo International Model Arab League participated in a delegation that represented Saudi Arabia. “There were eight councils in the conference, and we had representatives in all of them, ” said Kazziha. “It is an unprecedented achievement for AUC. Our University scored the highest number of awards among those who participated.”