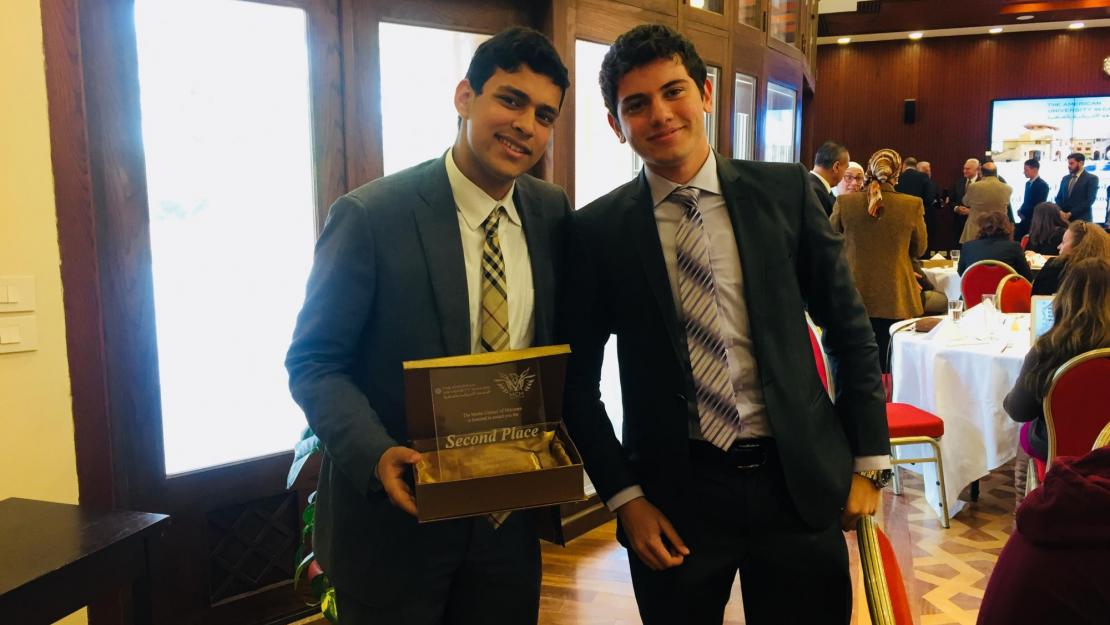 At their third annual Governance and Policy Competition, students in the Model Council of Ministers made policy recommendations and proposed projects for the development of the Sinai Peninsula. Governor of South Sinai Major General Khaled Fouda attended the final student presentations and spoke at the awards ceremony, where distinguished student projects were recognized.

Participants in the competition make policy recommendations and propose projects to be initiated by the government based on a specific topic of interest to the Egyptian government. This year’s competition focused on the development of the Sinai Peninsula. First place was awarded to Mark Mohy '17, petroleum engineering graduate, and Madline Habib, economics senior. Second place was awarded to Karim Mourad, computer engineering freshman, and Tony Rizk, petroleum engineering sophomore.

At the awards ceremony, President Francis Ricciardone welcomed guests, Governor Fouda as well as Major General Shawky Rashwan, head of the Sinai Development Authority. “This is something very special at AUC,” said Ricciardone, reflecting on the importance of student organizations and engagement. “At AUC, we try to inculcate, in our students, leadership skills. … We think public service is a very important calling. Through the Model Council of Ministers, our students get to understand what it means to serve, not only to demand and exercise freedom, but to take up the responsibility of serving the public.”

With such a pressing and relevant subject matter at hand, student participants were challenged to immerse themselves in the intricacies of being a government official in today’s political environment. “MCM’s annual governance and policy competition is one of the best ways to inspire student interest in governance and a career in public service,” said Mohamed Heggi, awareness and strategic relations manager of MCM,  who is majoring in petroleum engineering and minoring in economics. “Often at AUC, students have the perception that the public sector is dull and has no real future. What this competition does is that it exposes participants to what it is really like to govern.”

In addition to making their own presentations, MCM students were able to hear from a government official himself about the current projects unfolding. Addressing the theme of the competition, Fouda presented on several development projects and prospects for future advancement of the South Sinai region.

At the event, Ricciardone praised the hard work students put into building student-led organizations, gathering resources and executing events such as this one. He highlighted the University’s recent official adoption of the cocurricular transcript, which documents students’ efforts in various organizations outside of their required course load. Additionally, President Ricciardone emphasized that AUC's MCM plans to host MCMs from all throughout Egypt for an event in February 2018.

“[MCM] was founded in 2011 to be the only student activity on campus that focuses on Egyptian politics and governance with a vision to raise political awareness among the AUC community and beyond,” reflected Ahmed Hamza, president of MCM and mechanical engineering junior.

The judging panel, made up of Ghada Barsoum (MA’99), associate professor in the Department of Public Policy and Administration, Khaled Tarabieh, assistant professor in the Department of Architecture, and Amir El Ebiary, mechanical engineering senior and academics director of MCM, chose the two winning MCM teams to receive cash prizes for their impressive projects. The winning team members now have the opportunity to intern at the Ministry of Higher Education and Scientific Research; Ministry of Planning, Monitoring and Administration Reform; and Ministry of Investment and International Cooperation.