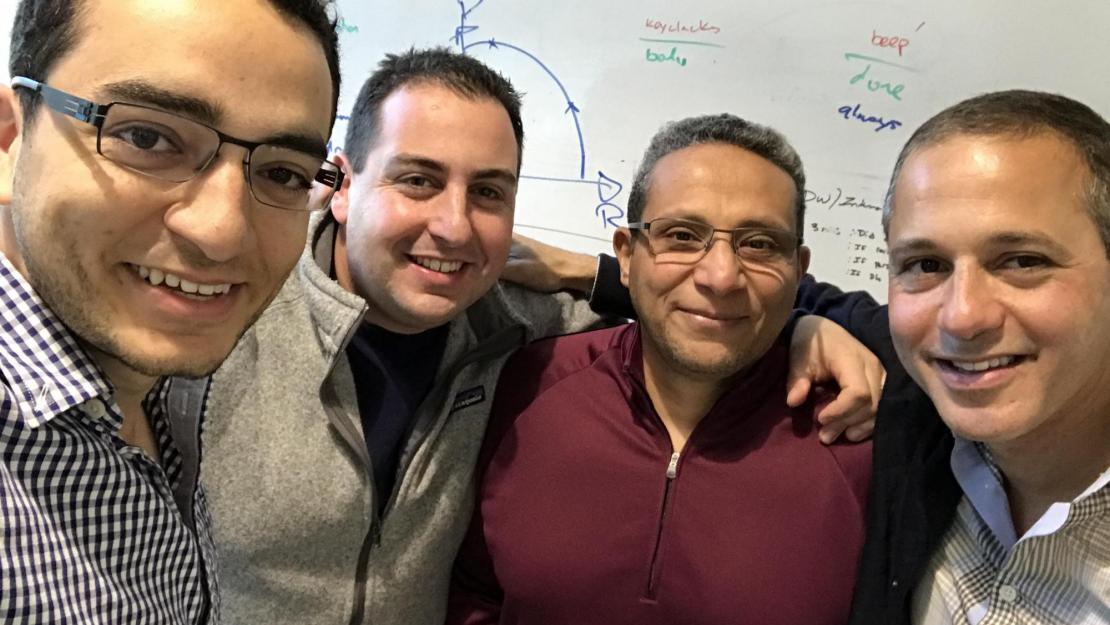 Mohamed El-Geish '07 (left) is a founding member of the Silicon Valley startup, Workfit
By
Ioanna Moriatis

Mohamed El-Geish ’07 wrote his first computer program at just 10 years old, after stumbling upon a book about BASIC (Beginner’s All-Purpose Symbolic Instruction Code).  With the help of a tutorial, he created a simple quiz game in which players are prompted to identify the correct countries based on cities. Today, with a bachelor’s in computer science from AUC and a minor in mathematics, he has had a successful career with Microsoft and LinkedIn, and is now part of the founding team of a startup, Workfit, in Silicon Valley.

“The world needs more coders and better coders,” El-Geish shared in his LinkedIn blog. “There are great economic opportunities for coders in almost every single field of work that requires interacting with computers, which are an integral part of our lives nowadays.”

Programming is a personal passion for El-Geish as well as a professional and academic concentration. Throughout his career, El-Geish shares in his blog, he has “made it a point to learn new programming languages on the side to stay in touch with new trends in the industry.” While in school, he placed 11th in the ACM International Collegiate Programming Contest (MENA) in Kuwait.

A high-ranking thanawiya amma student, El-Geish participated in various extracurricular activities at AUC, including the Student Union and Entrepreneurs’ Society, and served as president and founder of the Arabic Literature Club. From his first day at AUC, he was certain that he would major in computer science. He recalled a story in which he met a fellow freshman at an orientation event and both were quick to express their goals of studying computer science and eventually working for Microsoft in the United States. It was a dream he initially perceived as farfetched, as companies from the United States did not appear to be hiring from the Middle East at the time. Fast-forward a few years, recalled El-Geish, and he is speaking to his classmate again, this time to update him on an offer presented to him by Microsoft after a round of interviews in 2006.

After accepting the offer, El-Geish went on to spend the next seven years at Microsoft, in North Carolina and later San Francisco, working on various products. He first joined as a software development engineer and was promoted over the years to his last position as senior technical lead. His next career stop was LinkedIn, where he contributed in a range of roles. A large part of his work included managing a team responsible for the machine-learning and personalization of the homepage and news-feed of the website. He was involved in shifting the paradigm of thinking about LinkedIn as a mere job search engine to a platform that functions as a gateway to the professional world, from researching and getting educated to networking.

He has now recently joined the founding team of a startup, called Workfit, as senior director of engineering. The central idea behind the startup is to aid companies in increasing productivity at work. Workfit offers one product line: meeting facilitators. The goal is to increase companies’ work efficiency by providing an Enterprise Voice Assistant, Eva, to ease, focus and smoothen group discussions. Eva functions based on artificial intelligence and speech recognition,  facilitating meetings and encouraging creativity by making them searchable, recording decisions and following up on action-items discussed.

Reflecting on his career path and advice he would give to AUC students now, he thinks back to a philosophy rooted in Japanese culture that he always retains in the back of his mind: the philosophy of the “ikigai” diagram. Comparable to a Venn diagram, the “ikigai” is composed of four overlapping circles, each housing a different professional value and intersecting to form four larger ideas: passion, mission, profession and vocation. “I highly encourage people to focus on the last circle, passion, a combination of what makes you tick and what you are good at,” advised El-Geish.