In Memory of Dr. Sarwat Bassily: A Lifetime of Generosity and Selfless Spirit of Service 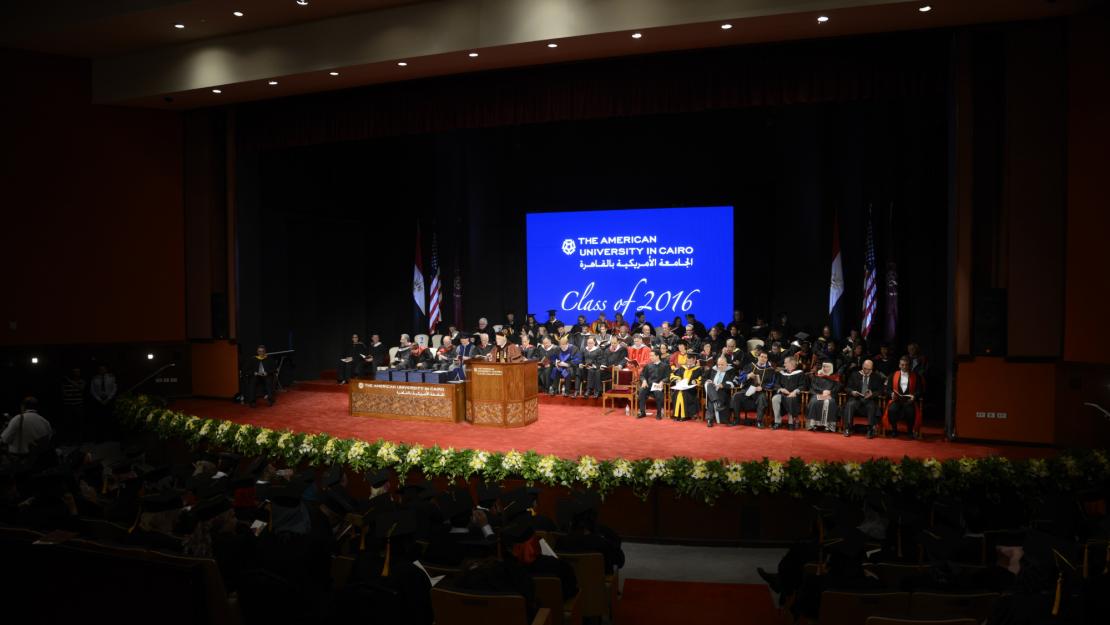 Dr. Bassily famously named the University’s main auditorium on the New Cairo campus, Bassily Auditorium, which accommodates more than 1,000 people and is used for major AUC events such as commencement
By
News@AUC

Longtime AUC supporter and chairman of Amoun Holdings for Financial Investments, Dr. Sarwat Bassily passed away, leaving AUCians reflecting on his numerous contributions and visible dedication to the University.

“I know his passing will be deeply felt across Egypt as an inspiring visionary and leader,” said President Francis Ricciardone. “At AUC, the Bassily Auditorium will remind each entering class of his generosity and selfless spirit of service to Egypt.”

As a generous contributor to many aspects of AUC, Dr. Bassily famously named the University’s auditorium on the New Cairo campus, Bassily Auditorium, which is the University's main auditorium able to accommodate more than 1,000 people and is used for major AUC events such as commencement. It has hosted international conferences, symposia, meetings, seminars, concerts, presentations and performances.

In 2003, Dr. Bassily donated a significant amount to support the establishment of the Egyptian Chair in Coptic Heritage -- the only such program in Egypt. The Egyptian Chair in Coptic Heritage is an endowed professorship at AUC that supports teaching and research in the field of Coptic studies, providing AUC students with the unique opportunity to gain insight into Coptic culture and history from a number of distinguished scholars, as well as a rare opportunity to study the linguistics, theology and history of Coptic culture and its role in modern society. Few universities in the world offer similar programs, and AUC's program is accessible to Egyptians and foreigners alike. This fund also helps provide support for the University’s library holdings and fund research projects.

The Egyptology/Coptology program prepares students for careers in Coptology, taking full advantage of its location in Egypt, where students can visit and study monuments in context as well as gain practical experience in their chosen fields. The Egyptian Chair in Coptic Heritage is a pooled fund supported by more than 185 donors. “Coptic studies is of critical importance in today’s world," said Dr. Bassily. "When we established a campaign to raise awareness of the importance of such a field of study at AUC, there were few universities who had such programs. We received a lot of interest from friends and visionaries who grasped this unique opportunity to provide generations of students with insight into Coptic culture and history. I believe in the importance of education to prepare the next generation to lead Egypt and the Arab world, and AUC is taking on that vital role with excellence and integrity.”

A graduate of the Faculty of Pharmacy at Cairo University, Dr. Bassily spent his career as a leader in the pharmaceutical industry. He first established his own pharmacy in Aswan in the 1960s before moving on to found several companies, including Advanced Biochemical Industries and Amoun Pharmaceutical Industries Company, both later acquired by GlaxoWellcome. From there, in 1998, he established Amoun Pharmaceuticals, which was later sold in 2006 to a consortium of U.S. and international private equity investors, including Citigroup Venture Capital International, Capital International Private Equity Fund IV and Concord International Investments, for a reported $487 million. As chairman of Amoun Holdings for Financial Investments, wholly owned by the Bassily family, Dr. Bassily managed a group of companies dealing in household appliances, tourism, construction materials, vehicle and car industry and spare parts, and other fields.

Dr. Bassily was well-known for his commitment to seeing through his projects and serving his community. “What is less than ideal, I reject immediately,” he once said. “Our main competitive advantage is hard work; I believe that not accepting anything incomplete is the best way to do business.”