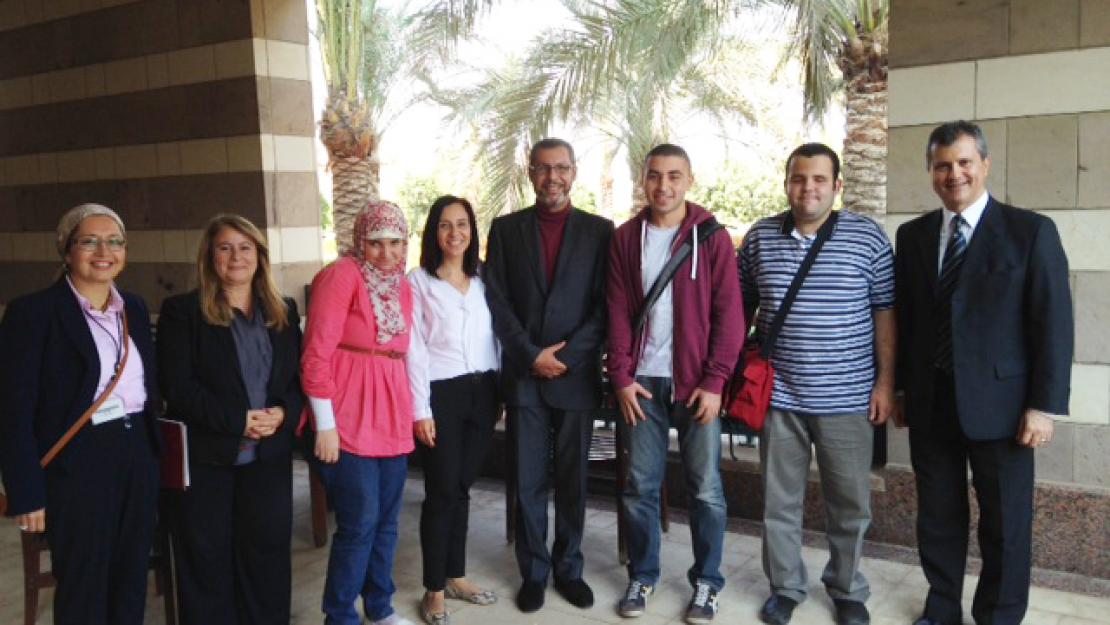 Hadeer Mohamed's dream since childhood was to study computer science. However, being visually impaired, her dream started fading away during high school at Taha Hussein School for the blind. Thanks to the world class facilities present at AUC and to the generosity of HSBC Bank Egypt, Mohamed, recipient of the HSBC Bank Egypt Public School Scholarship, is now a sophomore studying computer science in the School of Sciences and Engineering.

To fulfill Mohamed’s dream and the dream of many other hard working students with disabilities, AUC established an Adaptive Technology Corner, which includes sophisticated and up-to-date software and equipment to support visually impaired students at AUC. They include a Windows screen reader solution called Job Access with Speech (JAWS), which license was recently renewed by HSBC.This software uses the Windows screen reading technology, which retrieves all displayed information from the internal screen of Windows. JAWS is familiar with popular applications such as Devenv, which allows visually impaired students to make their own visual studio projects. JAWS also recognizes all graph dimensions and retrieves text of any images, which will help students distinguish between a curve, acute angle, deviated line or hexagon. The second assistive equipment at AUC that was purchased by HSBC and now being used by Mohamed for her computer science courses is called Braille Sense U2, an apparatus designed to mimic any string with Braille Format. String here means normal text, math symbols, simple chemical equations and basic/scientific calculus equations. Proficient in the use of Braille, Mohamed is now teaching Braille to visually impaired children.

HSBC Bank also supports Mohamed ElShafie, another visually impaired student studying philosophy at AUC, and Eslam Ahmed, a finance student with a specialization in actuarial science. Earlier this semester, HSBC met with their scholars to get an update on their experience at AUC and to offer them job opportunities and internships. “We will help you graduate…you all need to identify your skills and work hard to make the most of them,” said Neveen Taher, HSBC’s director of human resources and external relations. “We find that AUC has a similar vision to HSBC in terms of education. Education is key for all nations to grow, develop, and reach high standards. It impacts everything. It is how we form our people, equip them with skills, and prepare them for the future.”

Ammar Shams, HSBC’s corporate sustainability consultant based in Dubai, seconded Taher’s remarks, adding, “Education is probably the only tool for growth and development but it is the area least invested in relative to its importance. Half of one percent of HSBC’s annual profit goes to support education. That is approximately $60 million globally per year. Helping the underprivileged is our primary focus; filling the space that no one else is filling.”

Explaining why they chose AUC specifically, Shams said, “AUC has a track record and heritage. Our biggest challenge is to find partners who are transparent, effective and efficient. AUC makes for an ideal partner because it has those qualities.”

HSBC focuses its efforts in selecting hard working and civically engaged citizens who have the potential to give back to their societies, which is why they have chosen Mohamed, ElShafie and Ahmed. Mohamed is a member in Resala and Glow, community service clubs at AUC. ElShafie writes for the AUC Times magazine, plays piano, works for the Cosmos Radio Station and is writing a novel. Ahmed is a member in the Finance and Economics Club, which brings professors and students together to discuss current issues, and the Help Club, a community service club on campus. He also participates in the Gerhart Center’s Lazord Academy, which introduces students to skills in civic engagement. Outside of AUC, he and his friends have been helping to finance a hospital.