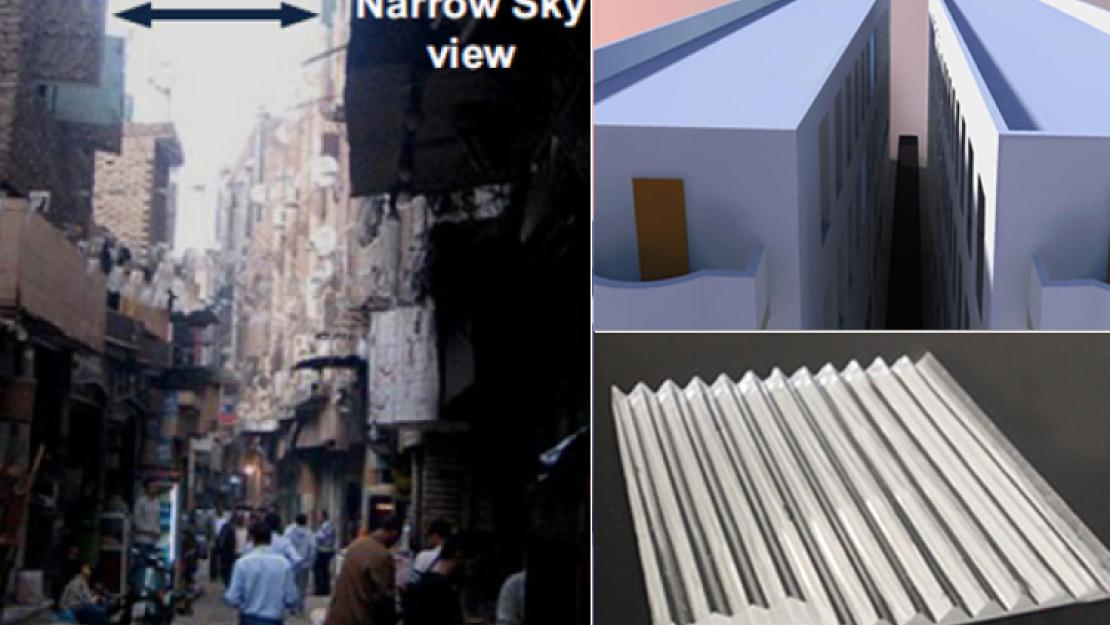 As populations boom in cities worldwide, buildings are constructed closer together and more floors are added to meet the increased demand for housing in urban areas. Especially common in cities in the developing world, these tightly configured networks of tall buildings block sunlight from reaching narrow streets and alleyways, as well as rooms and apartments on the lower floors. Khaled Nassar, associate professor of construction and architectural engineering at AUC, is working with a team of graduate students and professors from Ain Shams University on the design of plastic panels that improve lighting of dim areas by more than 200 percent in the fall and 400 percent in the winter.

“The idea is very simple,” Nassar affirmed. “We designed and manufactured a piece of plastic with ridges that can be mounted on the edges of rooftops and the sides of buildings to direct sunlight into alleyways and lower floors in order to make them brighter during the day.”

The corrugated plastic panel is tilted at an angle and hangs about one meter over the edge of a building in order to reflect sunlight into the street below. It is designed to continue to work as the sun changes positions in the sky throughout the day and is suitable specifically for the Middle Eastern environment. “The panel could be placed according to different applications,” Nassar noted. “The idea first came about when a colleague and I were talking to a friend who had just moved from the first floor to the top floor of his building, and he was telling us how much brighter the top floor was.”

In addition to being cost-effective, the panels are a source of sustainable energy. Rather than using electricity to power streetlights or backyard lighting, the panels harness solar energy to illuminate dark areas.

With testing funded by the Science and Technology Development Fund, the team has constructed two models –– a smaller-scale model and a one-to-one model. Their research has already received media attention for the paper in which they detail the design and potential uses of the panel, “Illumination of Dense Urban Areas by Light Redirecting Panels,” published in Optics Express. “There is potentially a private market, as well as ministry or government usage to light under bridges or in alleys,” Nassar explained. “I have been contacted by people in satellite cities who have backyards or swimming pools, but buildings prevent the sunlight from reaching them, so it is very dark and gloomy. There may be a large market for these panels in the Fifth Settlement and Al Rehab.”

The panels, made out of polymethyl methacrylate, best known by the name plexi-glass, can be manufactured inexpensively while maintaining high durability and endurance of different weather conditions. Their main benefit is countering the negative effects of the lack of natural sunlight, which have direct implications on physical and psychological health including physical weakness and mood swings. “Seasonal Affective Disorder is a kind of depression people develop when they aren’t exposed to enough sunlight,” explained Nassar. “In order to combat this, you are supposed to sit in front of light with the same spectral distribution as the sun.” Vitamin D deficiency is also caused by inadequate sun exposure and may result in pain and weakness, and has even been linked to diseases such as cancer, diabetes and multiple sclerosis.

Looking into the future, one of the team’s main goals is to be able to sell the plastic panels at a cheap price to private clientele. “The interest from the private market took us by surprise,” said Nassar. “We were just trying to get a paper published; we didn’t expect to launch a business venture!”