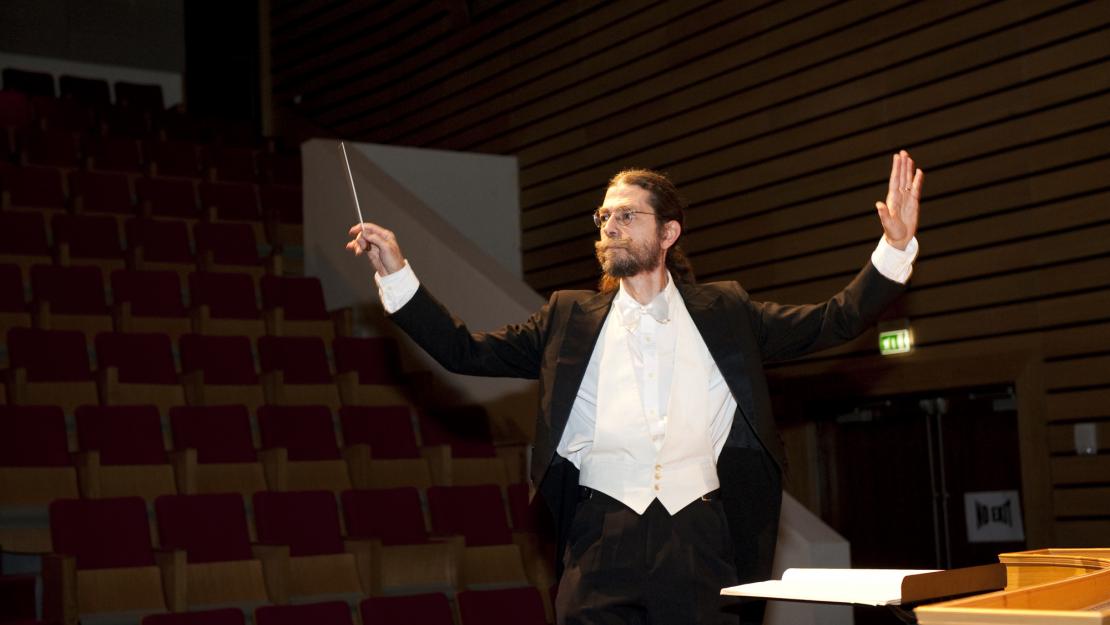 For John Baboukis, AUC professor and director of the music program, music –– and in many ways Egypt –– has always been a part of his life.

“I’ve always done music,” said Baboukis. “I wasn’t actually thinking that I was going to do music for a living, but it was always a part of my life. When I went to college, I was going to be an English major, but I kept taking music courses, which is the great thing about liberal arts. I ended up doing a major in [musical] composition.”

In addition to this growth in student enrollment numbers, the music program now has a music technology major, which according to Baboukis, is the only one of its kind in the region. “This is very important because Cairo is the center of music in the Arab world,” he explained, adding that AUC’s music program has also created a boutique major in performance, which attracts high-quality adjunct professors, many of whom come from the Cairo Conservatory.

The professor’s aspirations for music at AUC, and in Cairo more broadly, do not stop there. “One student at a time, we are trying to make music more valued as something that goes along with other things, so that I don’t get students coming to my office who say they took piano when they were 10, but had to stop when they were 12 because they were preparing for university,” Baboukis added. “Rather, music makes you better at other things, which is what I’m constantly telling people.”

He also hopes to continue developing courses to better teach students how to read -- and not merely memorize -- music, to see more students playing in the professional orchestra, and to even some day develop a recording label at the University where the orchestra could create music for films and AUC alumni could return to make recordings.

Inspiring Music Beyond the Classroom

Viewing music as a vital part of us that needs to be nourished, Baboukis has led and established several musical performance groups. “One of the nice things about being at AUC is that, since it’s a liberal arts college, you can be involved in many different things,” he emphasized.

In addition to teaching, Baboukis is the conductor of the Cairo Choral Society, a community chorus affiliated with the University. “When I first came here, the Cairo Choral Society was largely an expatriate chorus,” he said. “It is now essentially 50/50 – Egyptians and expats. Many of these Egyptians are former students and friends of former students. This also keeps young people involved, which is great because that’s where the energy comes from.”

Baboukis is also the founder and co-director of the Lions of Cairo, an early music group that specializes in medieval, renaissance, Arab and Baroque music, as well as Byzantine chant. He is the conductor of the Cairo Festival Orchestra, a professional ensemble that frequently accompanies the Cairo Choral Society, and which is being developed as an ensemble in residence at AUC.

During his sabbatical leave, he also composed a symphony that was premiered by the Cairo Symphony Orchestra.

Music at an Early Age

Following his undergraduate and master’s studies, Baboukis obtained his Doctor of Music from the Jacobs School of Music at Indiana University, where he was the first doctoral student ever to submit an original composition instead of a more traditional dissertation for a degree in choral conducting. Baboukis then went on to teach conducting and direct numerous choral and early music groups at various universities around the United States and Canada. Throughout his life, Baboukis has held a passion for Byzantine chant, which he first encountered as a child while attending a Greek Orthodox church in the United States.

After moving to Egypt, Baboukis began to explore “the strong connections between Arab and Greek music, Byzantine chant, as well as early Western Medieval music.” However, it was not only a musical connection he felt with Egypt. A first-generation Greek American himself, Baboukis traces his family lineage back to ancestors who lived in Egypt as Greek Orthodox priests.