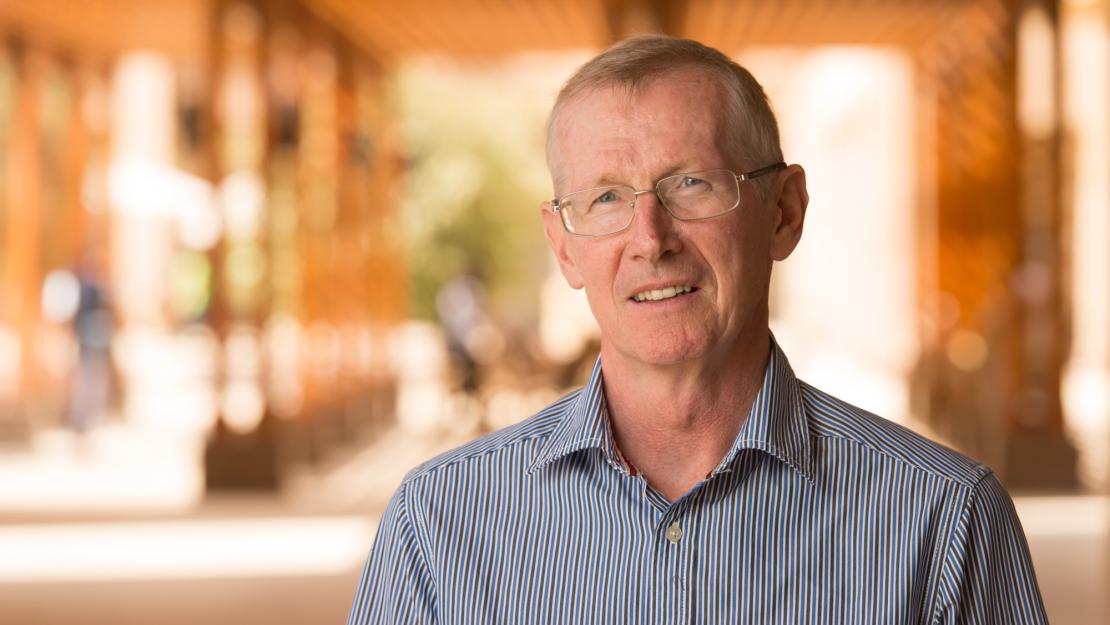 It was during his summer holidays as a student that Bernard O’Kane, now professor of Islamic art and architecture, took trips from Ireland to Turkey, Egypt, Iraq, Syria, Jordan, Lebanon and Iran -- and “was hooked.”

Recently, O’Kane won the ninth Farabi International Award, granted by the Ministry of Science, Research and Technology of the Islamic Republic of Iran for outstanding scholarship in Islamic humanities. Through publishing books, taking students on field trips and photography, O’Kane has, for the past – almost – 40 years at AUC, significantly contributed to the study of Islamic art and architecture.

Islamic Art: Past and Future

In November 2017, a project that O’Kane and graduate students worked on from 1997 to 2004 was finally made available online. As part of the project, funded by AUC and the American Research Center in Egypt, O'Kane and his team recorded all inscriptions on mosques in Egypt. The large team of students took trips to the mosques and photographed and documented the Arabic text with English translations. “It was delayed because, at the time, Arabic and English text did not work in the same field,” he explained. “But today, the Center for Documentation of Cultural and Natural Heritage is hosting it with the servers, and the data is available online for free. It’s a useful tool – not just for art historians, but for linguists and scholars of other fields as well.”

When it comes to working on projects with students, O’Kane says “there is no shortage of projects to work on.” In recent years, students have been more interested in modern Islamic architecture, he noted. “In our graduate program, we get architects and interior designers passing through who are among the people that can be very influential in this field,” he said. “We are hoping that they can learn to harmonize elements of cultural heritage and modernity in mosques – which hasn’t been easy to do anywhere in the Islamic world.”

In an effort to revitalize students’ creativity, O’Kane is commencing another project in collaboration with the Department of Architecture that aims to tackle the tough task of designing modern Islamic architecture. “We are hoping to give a joint course on designing modern mosques,” he mentioned. “I will be providing the historical context, and the other professor will be providing the studio part.”

Meanwhile, on an individual level, he is working on The Ultimate Book of Mosques, which he describes as a fun project that will require him to look more closely at modern mosque architecture. “I’ve been asked to pick 100 mosques and write captions and an introduction. It covers the entire Islamic world chronologically,” he stated. “So I will be balancing a little in terms of historic designs and what’s happening now with mosque architecture, which is fascinating, and has all sorts of possibilities.”

O’Kane, who originally studied law in the early 1970s, later switched to the field of art history, worked on his thesis in Iran and then came to Cairo in 1980 to join AUC’s Department of Arab and Islamic Civilization as an instructor. O’Kane believes that coming to Cairo for someone invested in the field of Islamic architecture is beneficial due to its location and the richness of its history. “A core part of the identity of Cairo’s Islamic architecture is that it has a larger chronological range than any other Islamic city, starting in the ninth century.” he reflected. “Mosques in Egypt have survived to an extraordinary extent, and Egypt is unique in the sense in which the capital city – Cairo – dominated over the other towns by getting more than usual in patronage from the rulers and the sultans – which is why we have this rich and extraordinary legacy.”

Another advantage for students learning an intricate and complex branch of art history such as Islamic architecture is studying in the historical city of Cairo, O’Kane affirms. “Cairo is in the middle of the Middle East, so we’re able to take students to see the original buildings, which is so much more enriching than being in a class and showing slides, for example,” he pointed out. “More than that, if I’m studying this field, being in Cairo means I can easily travel to other Islamic cities to further my studies.”

Moreover, Cairo’s Islamic art is distinct for its valuable stonework and inscriptions and what O’Kane describes as “some of the greatest masterpieces of world architecture” like the Ibn Tulun Mosque and the Complex of Sultan Hasan. “As mentioned, field trips are a wonderful way to introduce students to their cultural heritage, places they’ve never been to before, or that they never knew about,” O’Kane said. “Fortunately, the Museum of Islamic Art was recently reopened, containing masterpieces of art from around the Islamic world, now extremely well-displayed. It’s very exciting.”

O’Kane has immersed himself in the world of art history for the past few decades, keeping himself connected with scholars, writing significant books on the subject, such as The Mosques of Egypt, which includes 543 of his own photographs, serving as a visiting professor at Harvard and University of California, Berkeley, and being recognized for his research in the field. “Art is an enriching experience,” he concluded. “Whether it is music, literature, visual art or architecture. Studying it adds another dimension to life.”