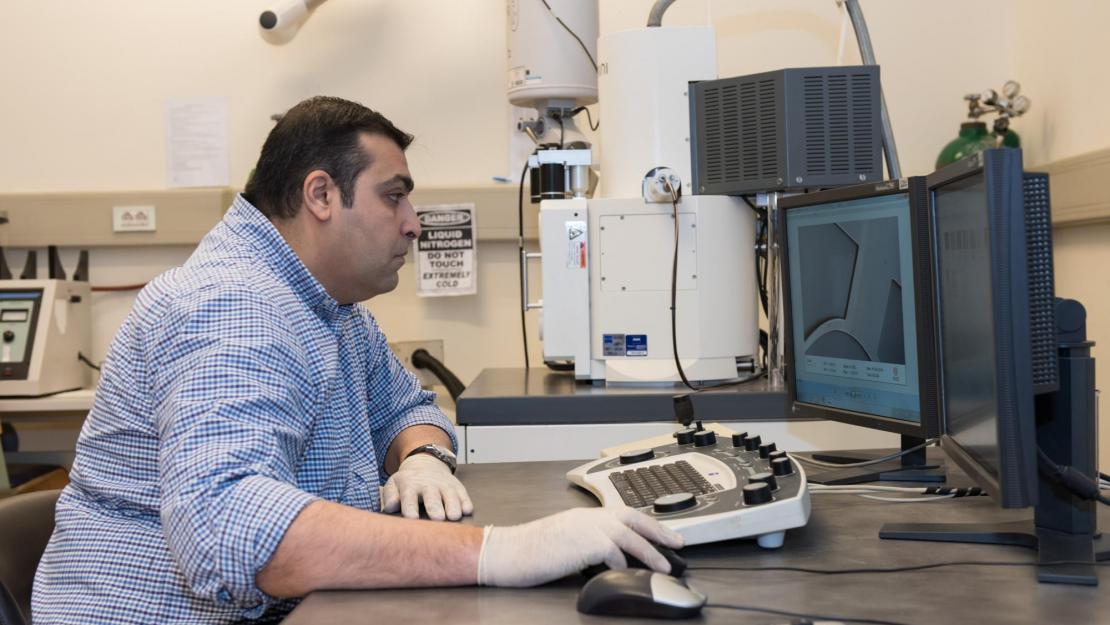 Marking World Cancer Day this month, News@AUC spoke with Mohamed Serry, associate professor in the Department of Mechanical Engineering, who is working with research partners at Princeton University to simplify and advance the testing of anti-cancer drugs.

The issues researchers typically face when developing drugs to tackle cancer or other diseases revolve around testing safely to gauge how a drug will interact with a human body. “The successful outcome of this project would allow real-time monitoring of bio-cell activities and a better understanding of cell and drug interactions at the cellular level,” detailed Serry. “This will eventually be an invaluable tool for new drug development and can offer better understanding and control of drug efficiency versus side effects.”

With the support of the Bartlett Family Fund for Innovation and International Collaboration, Serry and his team are working on establishing a tool that would revolutionize drug screening, making the process more cost-effective and accurate. The project revolves around the development of a compact on-chip wideband Terahertz Waves (THz) spectroscopic system integrated with a body-on-a-chip platform. “Currently, it takes 15 to 20 years, on average, from the proposal of a drug until it becomes FDA approved and available in the market,” said Serry. “The idea is to imitate a human body on a chip and monitor the interaction of this model body to different drugs using on-chip THz.

Basically, a body-on-a-chip platform functions as a chip that can simulate the human body’s reaction to drugs. The integration of the on-chip THz spectroscopic system enhances the chip’s functions, allowing drug testers to observe online, real-time characterizations of interactions between drug candidates and human cells – or simulations of them.

Serry’s specific project aims to model the interaction of a liver cancer treatment drug with body tissues through this body-on-chip platform. “The platform, currently under development, integrates both liver and heart tissues,” he explained. “This aims to mimic the human body by having various human tissues interact together, stimulating blood circulation. The intention is to provide an accurate image of how the drug is metabolized by various human tissues. This will help drug developers understand and optimize their drug and cut down the drug development cycle tremendous.”

Normally, drug screening is a lengthy process as it takes time to move through the different stages, including testing drug reactions on lab animals. “This platform is safe and accurately emulates human responses to drug candidates, allowing extensive drug screening at the cellular level,” explained Serry. “Conventional animal models often do not represent human physiological conditions and may produce misleading results.”

Serry notes how crucial it is that a drug be tested on humans, and not just animals, before being approved and released in the market. “This, however, is very costly, time consuming and ethically challenging,” he points out. Once the technology is ready to be put to use, this project has the potential to completely transform future cancer research studies, affirmed Serry.

Serry is working on this project along with Kaushik Sengupta, assistant professor of electrical engineering at Princeton University, as well as Osamu Tabata, professor at Kyoto University, and Ioana Voiculescu, associate professor and director of nanofabrication facility at the City University of New York (CUNY). Additionally, there were several students who had the opportunity to contribute to the project as well.

“Research collaboration is always great, with each partner or group contributing their core area of expertise toward a single mutual goal,” noted Serry. “Together, we have greater leverage, we learn from each other, and we can produce impactful research in a shorter amount of time.”

This project grew out of an already established collaboration between Serry, Tabata and Voiculescu. The three had met at Kyoto University when Serry spent nine months as a Japan Society for the Promotion of Science Postdoctoral Fellow. Since then, they have continued to work on collaborative research. Serry also had previous exposure to on-chip THz sensors through his work on other projects.

Sengupta of Princeton University has supported the project with his specialization in on-chip THz platform integration, and Kyoto University and CUNY have been able to contribute their expertise on the body-on-chip platform to help in its fabrication. Serry already visited both CUNY and Princeton last summer, and Tabata was able to visit AUC last may, bringing along several samples for testing.