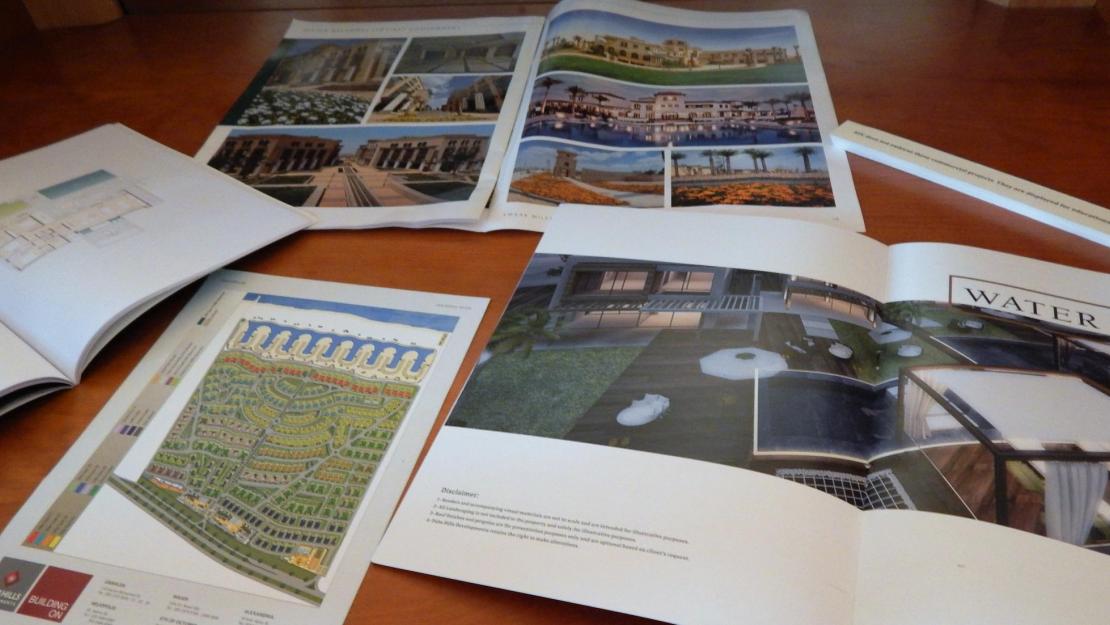 Cairo is one of the most densely populated cities in the world. With 46,349 people per kilometer square, the city’s residents live in close-quarters, and the clash of social classes is unavoidable. The stark distinction between the realities of the rich and poor are played out through the places they live — both their homes and neighborhoods — and the relationship between wealth and the power of public and private space.

To explore the social, cultural, economic and geographic complexities of Cairo, rhetoric and composition students utilized “digital humanities,” a field that lies at the intersection of traditional research in the humanities and new digital technologies. Taught by Doris Jones, senior instructor in the Department of Rhetoric and Composition, the students integrated original artifacts such as maps, photographs and brochures in a digital environment to create an exhibition, Heterotopias and Civil Society in Architectural Design and the accompanying website. On display in AUC Library foyer, the exhibition was designed and installed by Jones’ students in partnership with the Rare Books and Special Collections Library and University Academic Computing Technologies (UACT).

The students examined photographs by professional photographers from the Cairo Camera Club, that document life in Cairo, Alexandria, Siwa, Baharia, Dakla and Nubia. They also looked at brochures and advertisements for the new housing developments being built around Egypt at an astounding rate that appealing directly to Egypt’s upper class. The students chose the objects to include and designed and installed the exhibition.

The students’ work relates to Ahmed Khaled Towfik’s Utopia, the text chosen for AUC’s Common Reading Program, exploring the relationship between public and private space and social class. “The book is a critical examination of the two polarized worlds Egypt has become — one that is gated and its inhabitants only interact with each other, and the other which represents the residents of informal housing communities,” said Jones.

Jones hopes that digital humanities will continue to be incorporated into the undergraduate curriculum at AUC.  “Archival literacy is of growing importance to undergraduate students,” declared Jones, emphasizing that part of the AUC mission is to build students' critical thinking skills and digital humanities allows student to see how they can develop ideas on their own.  “Students work with primary sources in order to produce new knowledge and make sense of visual culture without relying on secondary texts. Such important work also encourages students to see the potential of digital tools in the core humanities mission,” said Jones.

Below are samples of some of the students’ insights and deliberations.

“Not only do these luxurious, gated residential developments carry foreign names such as Westown, Swan Lake, Beverly Hills and Palm Hills, they also import Western architecture, designs and signs of modernity and promise ‘an idealized vision of an appealingly alien lifestyle.’ ... Moreover, social relations and mental health are even offered as commodities purchased with the price of a home rather than created by civic action.

“Through cleverly designed advertising, developers succeeded in affecting consumers’ choice and provoking them to take the action of purchasing. As they inject new ideas, desires and experiences for competition and profitability purposes, rather than simply respond to market demand and wills.”

Dina Nafei reflects on the acknowledgment and respect of the residents of informal housing:

“As informal communities are mapped, the government acknowledges their existence, so residents become legally recognized and gain political legitimacy. .... Thus, mapping informality gives residents power to demand social and political change, which will alter the distorted visions of informality.”

Photos also have a profound way of changing the negative perceptions of informal housing. Taken by Claudia Weins, the alluring picture titled Azhar Park (2015) depicts a vast green space in Azhar Park where it shows how families utilize space, thus increasing levels of social contact and social integration, which eventually leads to overall sustainability and welfare. Moreover, it provides a sense of connection between community residents and the natural green spaces around them, which enhances their mental and physical health. The photo challenges the negative view of informal inhabitants, thus aiming to give them dignity.”

Veronica Zaky considers the expansion of space housing compounds and the reality of the lifestyle they promise:

“As the gated communities spread unconquerably, the advertisements and marketing play an important role in advancing the consumers’ interests and influencing their housing preferences and housing consumption decisions in the Egyptian context. … It plays on the ‘need versus want’ scenario: One needs a place of shelter, but one desires a home with a particular lifestyle.”

The focus of this paper is on the possibilities attached to these new real estates, whether or not they will provide the commodities and advantages that they promise in the brochures, as well as their materialization in real life, which is not yet applicable. One may, therefore, say that these marketing brochures offer a false vision of an urban space that is supposed to be reshaped and reconstructed to address a high-demand commodity.”