Hats Off to the Graduating Class of February 2015 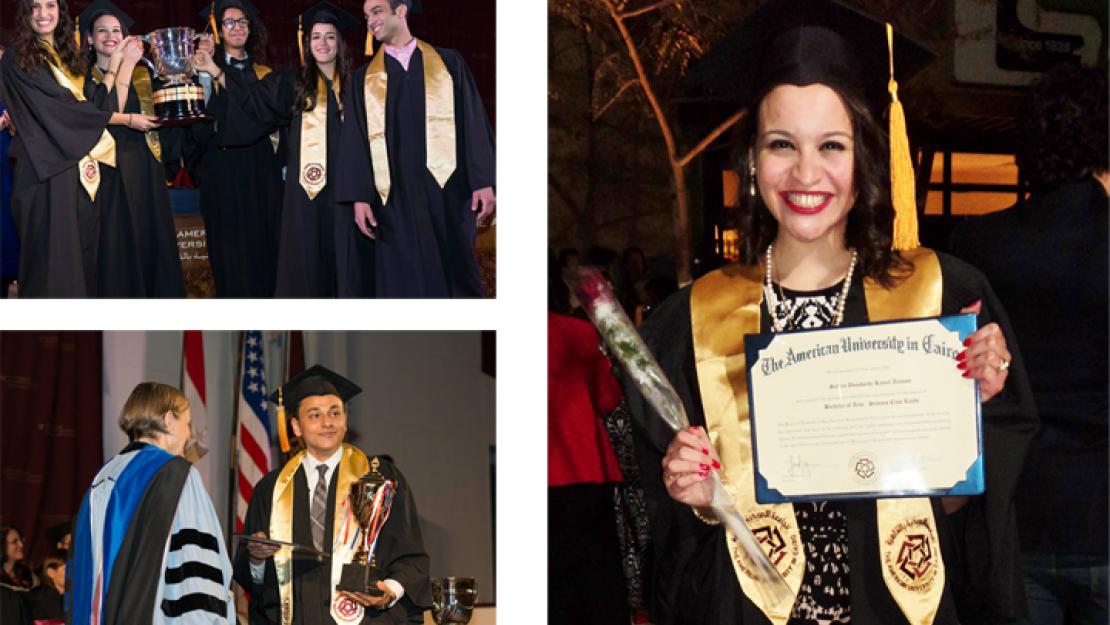 On a festive day full of joy and excitement for a new journey soon to begin, AUC awarded bachelor’s and master’s degrees to 409 and 187 students respectively. The students and families also enjoyed a live performance by composer and musician Omar Khairat, who received an honorary doctorate in fine arts from AUC.

Anyone who is familiar with AUC will know that an AUC education is not only about attending classes, doing well on exams, or writing pages and pages of essays and research. It is about working in the field, getting to know your surrounding communities, becoming familiar with the words philanthropy and civic engagement, and most important of all, understanding the concept of a liberal arts education system. It is very hard to run across an AUC graduate without hearing about his or her participation in extracurricular activities, civic engagement efforts or study-abroad experience. This is what AUC is truly about, and for that reason, we honor, award and recognize those students who managed to get the most out of their journey at AUC.

With the support of individuals and corporations, AUC established several named awards to recognize students who managed to balance between academic excellence and contribution in extracurricular activities. A mechanical engineering graduate, Amr Seifeldin, spent most of his childhood in Riyadh, Saudi Arabia. When he joined AUC, he became involved with Egyptian society once he began his community service activities with the Volunteers in Action (VIA) community service club, working with children in orphanages. Recipient of the Ahmed El Mehallawi Family Award and the Student Government Cup for his academic excellence and contribution to extracurricular activities, Seifeldin took advantage of AUC’s resources and founded 3alraseef (On the Pavement), a community service club devoted to the plight of street children. Seifeldin spoke with multiple faculty members in the psychology department and set up trainings for his high board with Resala staff so that he could work sensitively and meaningfully with the children. Seifeldin and his team helped give children an incentive to stay off the street by planning organized activities. His goal was to teach them that there are things in life more important than money, including having a true childhood.

Seifeldin set up the core program of the group so that future members will have a foundation for further work. He is most proud that he managed to inspire members of his club to take on leadership roles. He believes that the concept of encouraging others to carry on his work is more important than anything he accomplished during a particular year as vice president. By joining AUC, Seifeldin got out of his bubble and now thinks of other people. “I am reminded of people with nothing, and it changes my decision making subconsciously," he said. "I start to make decisions not solely based on money, but based on my family and whether or not I can still devote time to help others.” Seifeldin plans to continue his weekly visits to the underprivileged children he worked with through VIA and packaging food during Ramadan, which he has continued every year. He is now working part time as an engineer at Motridal SpA, one of the most important Italian companies specializing in the design and construction of machines and systems for bulk material handling.

The Cairo International Model United Nations (CIMUN) is another venue where students get the chance to explore real-world issues. Safeya Zeitoun, economics graduate with a minor in psychology, was honored with the Nadia Younes Award for Public and Humanitarian Service, which was established in 2004 to recognize the graduating senior who has exhibited the highest commitment to community and humanitarian service. Zeitoun has been an active participant in CIMUN since 2010, when she first joined as a junior delegate, until she became the president of the Economic and Social Council in the 27th CIMUN. She also had the opportunity to be a delegate in NMUN in New York, where she was awarded the Outstanding Delegate award in her council. “My involvement in CIMUN has long been associated with a deep interest in humanitarian relief and developmental efforts, on an international scale as well as on a community-level," she explained. "As a secretariat, I have always been keen on delivering material and facilitating discussions for the delegates, centered on humanitarian and socioeconomic issues, such as humanitarian intervention and poverty traps."

Beyond her participation in CIMUN, Zeitoun participated in various community-based courses at AUC, where she conducted fieldwork and focused on community development. She worked with the Banati Foundation, a shelter for street girls in 6th of October city, producing a report for the shelter on ways to improve their lives, based on the girls’ needs and suggestions. She was also a member in Heya: The Women’s Initiative, an AUC student organization running in partnership with UN Women. In Heya, she worked on multiple campaigns and events on campus to raise awareness about gender inequality and gender-based violence in Egypt. “I hope to continue Younes’ legacy and further international developmental and humanitarian efforts,” she said. Zeitoun is in the process of applying to master’s programs in economic development in the UK and Switzerland. “I intend to pursue a career in economic research in an effort to find ways to alleviate poverty and address socioeconomic problems, particularly in the Middle East. My inclination to focus on developmental issues as an economics major, as opposed to financial markets or more business-oriented fields, was in large part due to the eye-opening knowledge I gained through MUN. My dedication to MUN and the extent to which it has influenced me is the main reason why I chose to apply to this award."