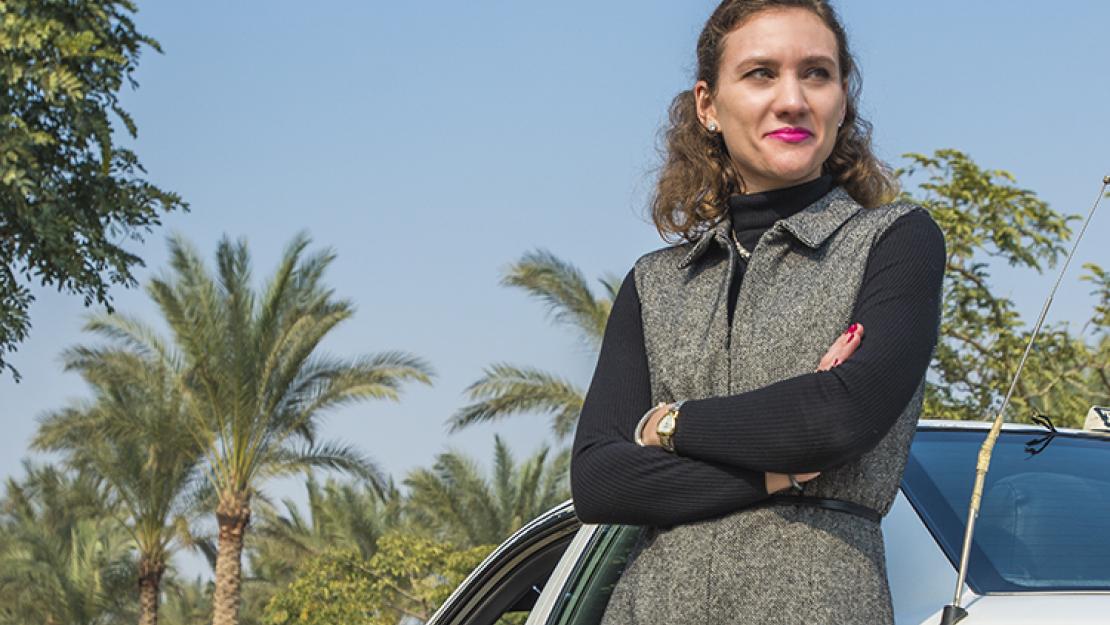 Recent protests in Cairo have brought to light the tension between car booking apps, like Uber and Careem, and traditional white taxis.  While these apps are increasing in popularity, taxi drivers argue they are not subject to the same regulations and rules as regular drivers, allowing them to operate with lower costs and create unfair competition. The taxi drivers' protests are part of a worldwide trend of resistance against these car booking services.

With rising pressure from new car booking services and a growing social stigma about taxi drivers, traditional cabs are in jeopardy, according to Nellie El Enany, assistant professor in the Department of Management.

In her recent ethnographic work on taxi drivers, El Enany explores social identity and identity work within the field of organization studies, which examines the ways in which individuals construct organizational structures and practices and how this, in turn, shapes social relationships, behaviors and wider institutions. “Anything that happens in society also plays out at the individual and organizational levels,” she explained. “If we can gain a better understanding of how individuals and societies function, we can understand how this impacts business, social mobility and economic growth. It is these social underpinnings that are at the center of how businesses function.”

Turning the lens on Cairo’s traditional taxis, El Enany explained how it became apparent that many of the taxi drivers she was riding with were trying to “brush off’ what they perceived as socially tainted marks on their identities.

“I got into a couple of taxis, and the drivers would strike up conversations about them not ‘really being taxi drivers,’ that they have bachelor’s degrees, that they were not ‘bad’ and that they wouldn’t rob or kidnap me,” she said. “As an organization scientist, this struck me as very interesting because the taxi drivers were engaging in what we call ‘identity work’ to construct what they perceived, and thought I would, as a legitimate and socially acceptable identity. For them to engage in this discourse, it begs the question of why.”

The answer? Social stigma, El Enany explained. “Stigma is generally understood as an attribute that is discrediting and may lead to people in society becoming marginalized and not fully accepted socially,” she said. “There are a number of studies that examine stigmatized identities and the effect they have in society and on business, including work on the homeless, garbage collectors and prison officers. It is crucial to understand how people deal with these stigmas, in other words, how they manage their identities.”

As El Enany’s research developed, it became apparent that recent political upheavals in society contributed to the development of these stigmas. “During the 2011 revolution in Egypt, there were stories of people being kidnapped, robbed or threatened by taxi drivers,” said El Enany. “While this may have happened a few times, these incidents have been hugely blown up by society, leading to the image of taxi drivers and the profession as a whole becoming tainted, in particular by a certain socioeconomic strata of society. The key issue here is that society is creating this stigma, and it is beginning to affect the image, reputation and well-being of taxi drivers. Of course, taxis will never disappear in Cairo, since a huge section of society depends on them; however, the growing stigmatization of taxis, which used to be a privilege to ride years ago, is worrying.”

The stigma of taxi drivers and threat of losing patronage have been recently amplified by the appearance of new car booking services like Uber and Careem, El Enany pointed out. These companies have a mobile app that people can use to request a ride and pinpoint their location on a map. Drivers pick up passengers in economy or premium cars, and follow the GPS route in the app, which also calculates the fare. Many drivers do this as their second or even third job to bring in extra income by using a car they already own. “Although these firms arguably target a different socioeconomic class to taxi drivers,” El Enany noted, “the result is that many customers are moving away from the conventional taxi driver.”

Key to the success of Uber and Careem is the perception that they are significantly safer and easier than taxis, though this image is also socially constructed, El Enany declared. They have a positive reputation for being tech savvy and employing “trusted” people to drive, she noted. The smartphone app also minimizes the language barrier, since the route is tracked by the company, and riders can share their estimated time of arrival with family and friends. In addition, both apps can take fares directly from people’s credit cards, so no cash or tips are required.

“Uber and Careem have developed a reputation of safety and progressiveness, in contrast to old-fashioned taxis,” said El Enany. “Their drivers don’t have to contend with the same social stigmas and, therefore, don’t feel the need to construct their identities in the same way as regular taxi drivers do. They have their own cars and smartphones, most have degrees and the way they dress is different — all this gives them an upper hand over taxi drivers.”

In addition, these car booking services are making diligent efforts to support the communities in which they work, El Enany said. Recently, Uber has implemented mandatory training for all drivers to recognize and report harassment, and Careem engages in philanthropy by partnering with a number of children’s charity organizations throughout the Middle East.

Driving is often not the main source of income for Uber and Careem drivers, who generally come from an educated background, according to El Enany, as compared to the typical taxi driver. “Driving is not their livelihood, not their identity. It just supplements their main salaries,” she said.

In contrast, most taxi drivers do not own their vehicles and are obligated to make payments to lease their taxis. So even if they put in a full day of work, they might not make a profit. “How is the average taxi driver going to survive?” said El Enany. “He often does not have the social capital or the resources, and then there is this growing stigma.”

Emphasizing the increasing gap between socioeconomic classes, El Enany noted that the community of taxi drivers is extensive and integral to Egypt’s economy and social life. “Society contributes to creating these divides and, ultimately, it impacts business and how institutions function because people who have stigmatized identities are not as employable or accepted by society,” she pointed out. “This is not only an issue with taxi drivers, but it also affects refugees, women and the homeless. These issues are detrimental to a country’s workforce and may create a larger social burden of unemployment. As a society, we should work together to break down social stigmas and motivate and empower those who are less able.”