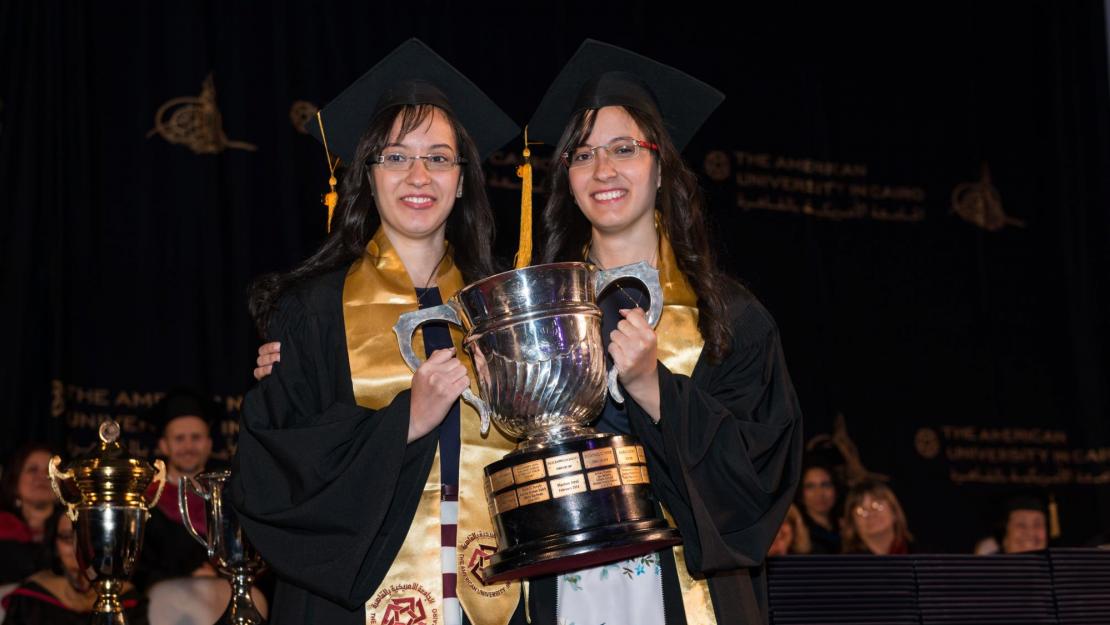 Twins often share the same birthday and looks -- but twin sisters, Haidy Saher Ghali ‘18 and Helen Saher Ghali ‘18, have shared even more - with the same choice of university, field of study and display of hard work throughout their academic journey at AUC.

At the 2018 Midyear Commencement, the sisters were presented with the President’s Cup, given to the graduating seniors with the highest grade point average, as well as the Mohamed El Beleidy Academic Award, granted to the President’s Cup winners and the Mohammed Bin Abdulkarim A. Allehedan Award, a cash award to the highest performing STEM (Science, Technology, Engineering and Mathematics) student.

Both Haidy and Helen were humbled when they learned about their awards on stage, feeling that it was a crystallization of all their efforts put in throughout their University careers. “It feels very rewarding after our hard work, and it made my parents proud," said Haidy. "This is only the start of a new challenging journey, and I hope that it will be as successful as my undergraduate life."

Similarly, Helen expressed, “It was more than a dream come true. It was never on my mind to receive all of this, and I'd be called greedy if I even tried to dream about it. At the end, I'd like to first thank God for always being by my side and my parents for their continuous support,”

Before joining the University, young Haidy and Helen saw AUC as the embodiment of eminence and accomplishment. “We both had this dream to join AUC, after seeing many of our relatives who are alumni and how successful they were on a personal and professional level,” Helen said. “We had the perception that AUC is not just an educational institution aiming to boost your knowledge in a certain field, but more of an interactive organization that builds people and leaders for the future.”

Demonstrating academic merit and excellence since their days studying for the International General Certificate of Secondary Education (IGCSE), the twins both received scholarships at AUC. It was a lifelong hobby of theirs to draw and paint. Helen achieved the highest grade in art and design across Egypt and submitted her artwork to the Cultural Scholarship committee at AUC. Haidy, who also excelled in art and design, gave the same scholarship a shot. They were both granted scholarships and admitted to study architecture. Upon acceptance, Haidy was granted the ​Raytheon Endowed Scholarship, and Helen received the Warner-Lambert Endowed Scholarship.

Coming to AUC was the right choice for them in terms of their potential and outlook on education's role in a student's life. “It was different from IGCSE, but they both have the same soul,” Helen said. “Similar to AUC, the nature of my high school taught us how to depend on ourselves and be hard workers. This was the foundation we both had since our first semester here.”

Interestingly enough, after their first year at the University, the back-then sophomores both switched majors -- together. “We changed our majors to construction engineering because we started gaining interest in the engineering, calculus and physics courses we took during our freshmen year,” Haidy said. As of Spring 2018, they have both already started pursuing their master's in construction engineering under the Laboratory Instruction Graduate Fellowships.

Both Haidy and Helen faced obstacles with regard to their many similarities and decided to turn them into opportunities to mutually better themselves. Their commonness was often the secret to their success. “Sometimes, when we’d sit for exams, we’d know if the other felt disrupted based on her movements. This would instantly make me worry and impact me negatively as well,” said Helen.

Meanwhile, understanding each other’s weaknesses helped them build on their strengths. “When we studied together, it helped us grasp the subject more -- even if it turned into an argument,” continued Helen. “Having someone the same age as you who understands exactly what you understood and what you didn’t in class, who knows all your silly mistakes and keeps warning you before every exam and who always grasps the part of class that you missed is something indispensable and a blessing.”

Both young women owe their celebrated University degrees to their encouraging and supportive parents, who were always willing to pull all-nighters with their daughters over the past four years. “They would stay awake for long nights just to keep us from sleeping -- and would come to pick us up from campus at 6:30 am after we’d spend 48 hours in the lab,” Helen reflected.

Moreover, the sisters believe that everyone at AUC, from friends who were “backbones in the toughest times,” to faculty and staff, who played a major role in their accomplishments. “This is all thanks to my professors who were always there to give feedback, the staff members who helped me register for my courses and the housekeeping staff members would always give me a morning smile that would boost my energy for the day,” Haidy expressed.

It was at AUC that the Ghali twins experienced the need for critical thinking and the difficulties of the adult world. Haidy recalls her final thesis group project crashing two days before it was due and summoning up the unyielding energy to do it all over again and present it. AUC is also where they witnessed their interests grow and their self-discovery unfold, where they have both returned and are looking forward to pursuing doctorates.

Haidy described her classes as places where you’d “get the knowledge that you have longed for,” including core courses where they both learned about economics, humanities and Islamic history. “I also learned about all kinds of people here: those who only want to take you for granted -- and those who keep your back straight when you fall facedown and who'd always be happy when you succeed,” she reflected. “It is where we both learned to always fight and never give up as your effort is always rewarded in the near or far future.”