The Game of Love and Chance Student Production Premieres Tomorrow 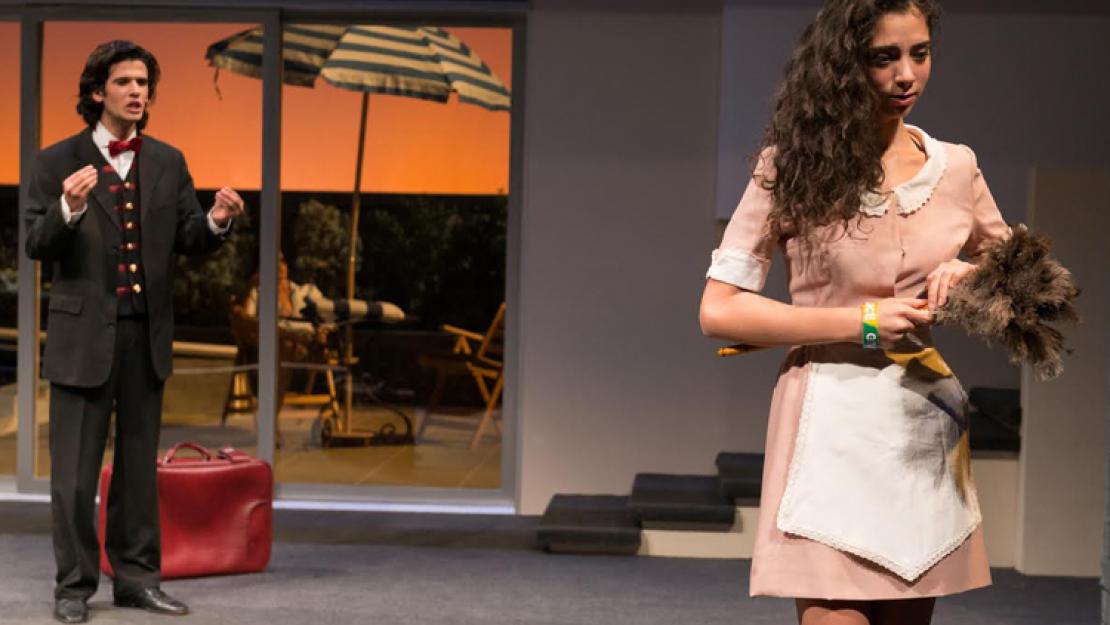 Donning a modern spin on a timeless tale, students involved in The Game of Love and Chance are finishing preparations for the play’s opening night on Wednesday, November 19, 6 pm, in the Malak Gabr Arts Theater. Performed originally in the late 18th century, The Game of Love and Chance depicts a girl, Sylvia, whose father hopes to marry her off to the son of his best friend. Both Sylvia and her counterpart, Dorian, hope to reveal each other’s true colors, and a twist of trickery ensues throughout the three acts. Concocted by the French playwright, Pierre de Marivaux, The Game of Love and Chance toys with both historic and modern notions of social status, and the ways in which those boundaries of social strata may be crossed. Mahmoud El Lozy, professor and director of the theatre program at AUC, expresses that his interest in the play springs from its youthful energy. “It is a play about young people, essentially,” he explained. "All the parts are very well-balanced, and most of the characters are quite young. We tried to look for that, for this piece.” El Lozy divulged that this is a piece he had hoped to direct for some time. “As a director, you make lists of plays that you would like to direct and that you think you can direct. Then you have a list of other plays you love, but that you will never be able to do. The Game of Love and Chance is one of the plays that I had on my list for a long time,” he said. Mary Aravanis, a multimedia journalism junior, is playing the part of Lisa, Sylvia’s servant. For Aravanis, the most rewarding element of her involvement in the play has been “working with El Lozy," she said. "He has been here for a really long time, and I had always heard good things about him and how he works. For me, it is a big deal to be a part of one of his plays. I have learned a lot from working with him because of all of his experience.” While the piece runs through a fairly traditional plot trajectory, the production has proven to be an unconventional one in other ways. Though The Game of Love and Chance was originally written for the 18th-century period, El Lozy’s rendition is set in a much more modern time frame –– the 1960s. In this way, the actors and stage crew have been challenged to adapt this vintage text to a much more current and relatable environment. Nevertheless, “the rehearsal process has gone very smoothly,” El Lozy noted, speaking highly of the group. “I have a very good stage management team, and this has been the most disciplined cast I’ve worked with in a long time.” Ahmed Omar, a theatre freshman, plays the leading role of Dorian. For Omar, the production process of The Game of Love and Chance has provided him with the opportunity to “work with a lot of people from a lot of different places," he explained. "I spend time with the stage manager, work with my fellow actors and then take notes from the director. I love that everyone’s work is different, but we are all working toward one common goal. The knowledge I have gained and the experience of getting to know a lot of people putting so much effort into one thing have definitely been the most rewarding aspect of this process.” As the opening night draws closer, students involved in the production are working tirelessly to put in the finishing touches. “Everyone is very excited about it; the group is having a lot of fun with it,” said El Lozy. Aravanis explained that she is “looking forward to the give and take with the audience. I believe that the production process has been successful so far, and that this will be evidenced by the audience’s reaction to what is happening on stage.” For Omar, this production holds a special importance. “This is the first time for my parents to watch me act in a play," he said. "I want to show them that I can do well; I want to show them why I majored in theatre.” The play opens in the Malak Gabr Theatre at 6 pm on Wednesday, November 19. Following performances will be held on November 20, 23 and 24 at 6 pm, and on November 22 and 25 at 5 pm. Tickets are on sale now at the AUC Theatre Box Office for LE 20.