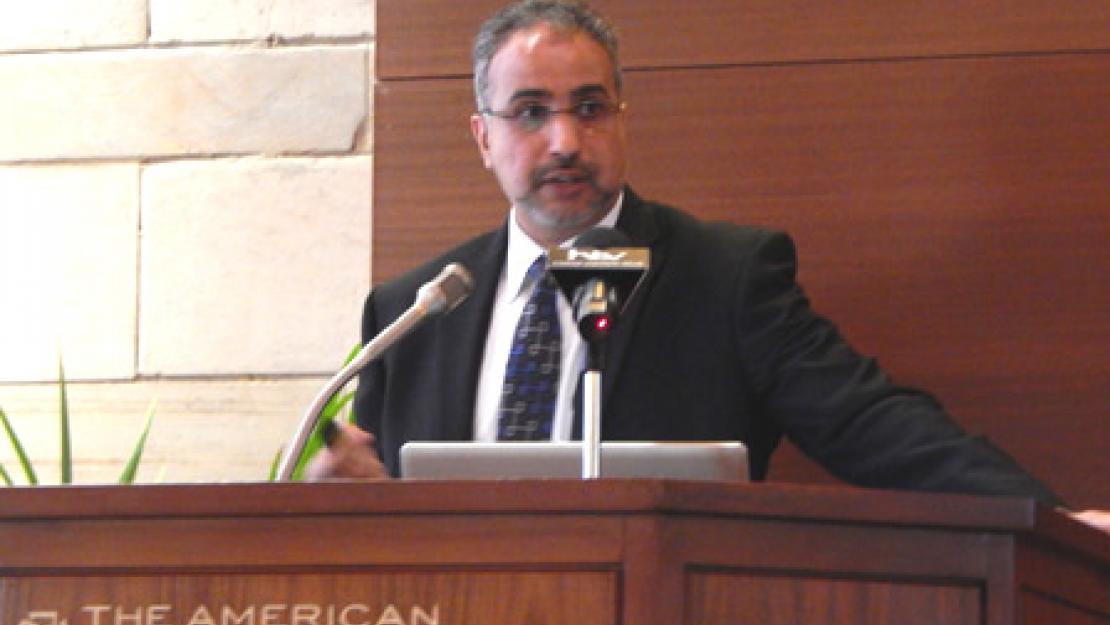 It has been three years since Egyptians took to the streets demanding “bread, freedom and social justice,” but Egypt will be unable to meet these demands if investment and lending policies are not improved and if social justice in an Egyptian context remains undefined, argued Mahmoud El-Gamal, professor of economics and statistics at Rice University and a leading scholar in the field of Islamic economics, during a lecture as part of the Transforming Egypt seminar series, hosted by the School of Business.

“What you see is that economic stagnation is the real source of frustration for most Egyptians; we are not catching up with the rest of the world,” El-Gamal said. “In the 1960s, the lower and middle classes in Egypt were advancing, but haven’t advanced since then. Egypt is stuck in the middle of the nations in terms of economic growth, and being stuck in the middle is a problem. Egypt needs to keep advancing or it’ll fall behind.”

El-Gamal noted that the reason why the Egyptian economy has stagnated is because of inefficient financial policies, including insufficient investment for sustainable economic growth. “Egypt is investing less than a quarter of its income and that’s how you fall behind,” he explained. “Investment creates growth.”

El-Gamal also acknowledged that Egypt’s current lending policies limit economic progress. “Egypt is lending inefficiently,” he affirmed. “There is forced lending to the government and we are lending to people who won’t pay back, so we have too many nonperforming loans.”

Moreover, Egypt has been trying to replicate a model of capitalism that is a hybrid between the Chinese and Dubai models, which rely on foreign direct investment and capitalizing on petrodollars, respectively. However, these models might not be suitable for Egypt, which has low savings rates and a much smaller share in recycled petrodollars. “Between 2005 - 2010, Egypt had this obsession with China, but pursuing China’s economic policies in Egypt is a recipe for failure,” El-Gamal said.

But Egypt’s economic issues go beyond inefficient financial policies since consecutive governments have not been meeting people’s demands for social justice. “People do not just want growth; people want justice,” El-Gamal said, adding that since the 1990s the unequal distribution of wealth in Egypt has grown. “Over the years, you can see the widening gap between the top 10 percent in Egypt and the rest. Under Nasser, the gap between the middle class and the upper classes was decreasing, but the middle class begins to lose ground during the 1990s with the implementation of more neoliberal economic policies. Neoliberalism failed because of public sentiment. The government didn’t take into account that people want more equality, not just economic growth.”

After the January 25 Revolution, Egyptians then elected an Islamist party with the hopes that more egalitarian principles would be applied. Explaining why an Islamist party was chosen, based on data he compiled from the World Values Survey 2008 and Pew Spring 2012 Egypt surveys, El-Gamal noted, “The majority of people in Egypt are both leftist and anti-secular, so democracy for them means redistribution from the rich to the poor and means that religious authorities should interpret the law. So there is a conflation between egalitarianism and political Islam.”

According to El-Gamal, the widely held belief that political Islam and egalitarianism go hand in hand can be traced to the legacy of political activists and Islamic scholars since the turn of the 20th century. “From Farid to Ghazali, there is this heritage of leftism and anti-secularism,” El-Gamal said.

However, the Muslim Brotherhood did not implement the egalitarian principles that Egyptians expected, in part because there is no clear theory of social justice in Islam, according to El-Gamal. “Neither traditional Islamic writings nor modern writings really define what we mean by social justice,” he said. “The Islamic jurists assumed that justice is what we do when judges sit at the bench and apply the law. Since the idea of justice is not defined, what traditionalists do is to use that same old measurement: just apply the law the way it was written, rather than interpret how the law will have to be applied today in order to enshrine the same principles of justice.”

To implement true economic development and social justice in Egypt, El-Gamal concluded that not only technical reforms are needed by tackling issues like inefficient lending and investment, but a social contract that enshrines principles of justice is just as important. “In order to grow, we need to save and invest, but we also need a social contract that gives you the confidence and will to forego current consumption for prosperity of future generations,” he said.