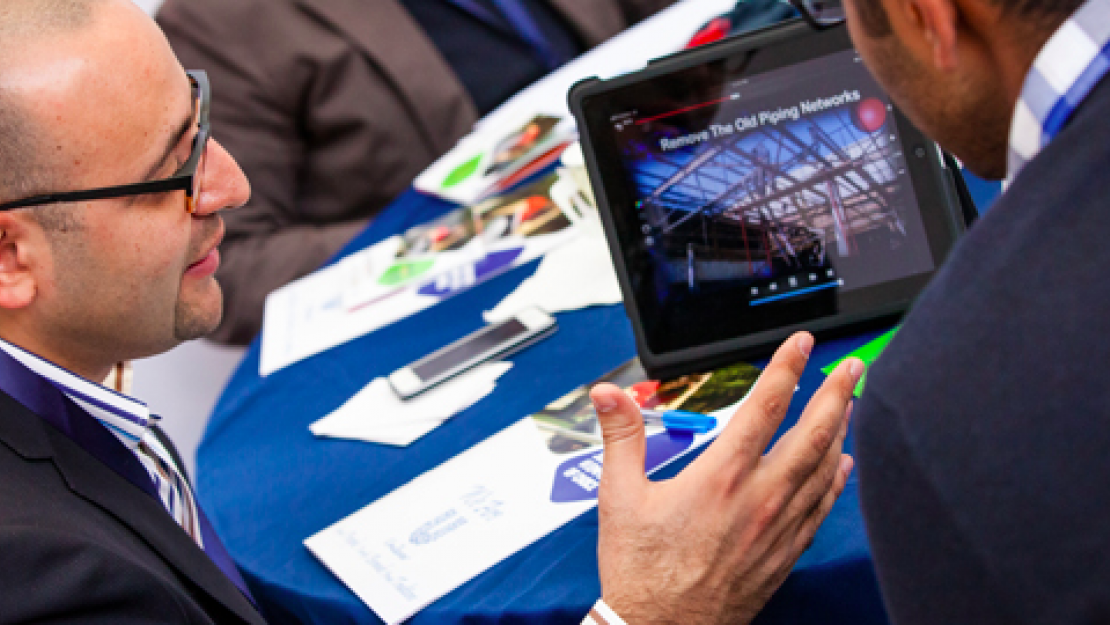 After participating in job shadowing sessions organized by the Career Center, students Omar El-Maria and Dina Salem walked away motivated by new interests and more confident about their career paths.

“You get a glimpse of how people really work and what exactly they do. It really helps with choosing a major," said sociology student Salem. "f I knew about this program earlier, it would have been extremely beneficial. The people in the visit with me were freshmen and sophomores. They were trying to explore different jobs and had done different visits. ”

Through the Career Center's job shadowing program, a corporate employer hosts a student or group of students to experience the day-to-day tasks of his or her job. Through these daylong visits, students learn more about various fields and types of positions to guide them as they think about potential careers for themselves.

Declaring a major can seem like an overwhelming task for undergrads still trying to uncover their likes and dislikes and get a sense of their strengths. The Career Center’s job shadowing program gives students the chance to try out a career for a day by visiting experts in a particular field and learning how academic skills can be applied in a real office setting.

Both El-Maria and Salem expressed their uncertainties and curiosity about career choices in meetings with their counselors. After brainstorming a list of interests, they both had the chance to sign up for job shadowing sessions with different companies and learn about experts themselves. The fields to choose from are limitless.

The two students initially had concerns about how to apply their majors out in the real world. However, their job shadowing experiences gave them a feel for how they can position themselves in the job market and what they might want out of a career. “Finance does not require a certain major or certain background to fit in,” said El-Maria, a mechanical engineering major who most recently visited Deloitte to dip his feet into the finance world. “Anyone can fit in given he or she is good with numbers and analysis. I am now expanding into supply chain management, finance and sales, and I found that I have some transferable skills that fit into these three fields.”

It’s All About the Numbers

El-Maria has tried out the job shadowing program several times now, with three visits under his belt this semester alone. His previous visits included Egyptian Steel, Mars Wrigley Confectionery and Karm Solar. “I’ve been at AUC for five years, and this was probably the most informative and

beneficial experience I’ve had,” said El-Maria. “The people were very friendly and helpful. It was short, but it exposed me to the finance industry and gave me all the details I’ll probably need to pass an interview even.”

During his last visit to Deloitte, he engaged with engineers and individuals from a number of diverse academic backgrounds, boosting his confidence in the possibility of entering a career that might, at first glance, seem distant from his chosen major.

Coming from a family of engineers and new to college, a younger El-Maria thought this field would be a good fit for him long term. “During my third year of University, I took an economics class, and I thought to myself, ‘Wow, this is really interesting,’” he reflected. “Engineering is all graphs, equations and problems, but this gave me a whole other perspective. So I decided to minor in business. It’s about five courses, but it gave me the crust of the field.”

The job shadowing session at Deloitte gave him the opportunity to engage with the finance sector even more, getting firsthand experience of how to valuate a company for a client. “They walked us through a case study with a financial model that forecasts cash flows, balance sheets and income statements for five years,” El-Maria explained. They explained terms, how things are obtained. I really found myself understanding all of it, and I was also exposed to new terms and concepts I didn’t know about before.”

Viewing the Career Center as “an underutilized tool,” El-Maria says he encourages other students to explore how they can apply the skills gained during University and consider what it is they want to do. “Explore yourself,” he said, addressing students who might be unsure of how to declare a major and how to build a career. “Try to get engaged in applied work and talk to experienced people. No matter how many courses you take, applied work will always be beneficial in terms of making you decisive about what you want to do. Find what you’re naturally inclined toward.”

El-Maria is now preparing to travel to Germany at the end of the summer to begin his Master's in Management at the European School of Management and Technology in Berlin. However, he’s not done exploring career options. This particular program includes a mandatory six-month internship during which he’ll be able to really focus on the professional aspects of business while discovering more about the academic field in classes.

When Salem first heard of the job shadowing program, she also worried that she would be limited to fields within the realm of her major in sociology.  ”I found out that no, I can explore everything,” she said.

With an interest in working with others, potentially in the field of human resources, Salem decided to try out a job shadowing session with Cemex’s HR unit. “I’ve worked in clubs and found that when I worked with people in development and trainings, it was really interesting,” she observed. “I really love it, and I can excel in it. I learned a lot of things in the job shadowing session – about recruitment, about their trainings.”

Salem was most impressed with Cemex’s commitment to ensuring safety. “They were really keen to show us their ethics,” she said. “They care about safety. I appreciated that this was a value and that they really wanted to show us that it’s a main aspect of their work.”

Although Salem’s not limiting herself to HR positions as she gears up to begin her job search after just one more semester at AUC, she’s set on working to help others. “I want to work at something related to human development, either in corporations or HR doing training and development, or at an NGO with refugees,” she noted. “I’m still not sure which path I’ll take.”

The remaining semester, though, gives Salem just enough time to explore a bit more. She feels sure that she’ll participate in more job shadowing visits to experiment with different types of positions and see what strikes her interest.

One aspect of Salem’s Cemex visit that left an impression on her was the attention she received as an AUC student. “I found it to be very beneficial, and I really found it a privilege to be treated so well as an AUCian,” she said proudly. “They were interested in welcoming AUCians and were keen to teach us about their work.”