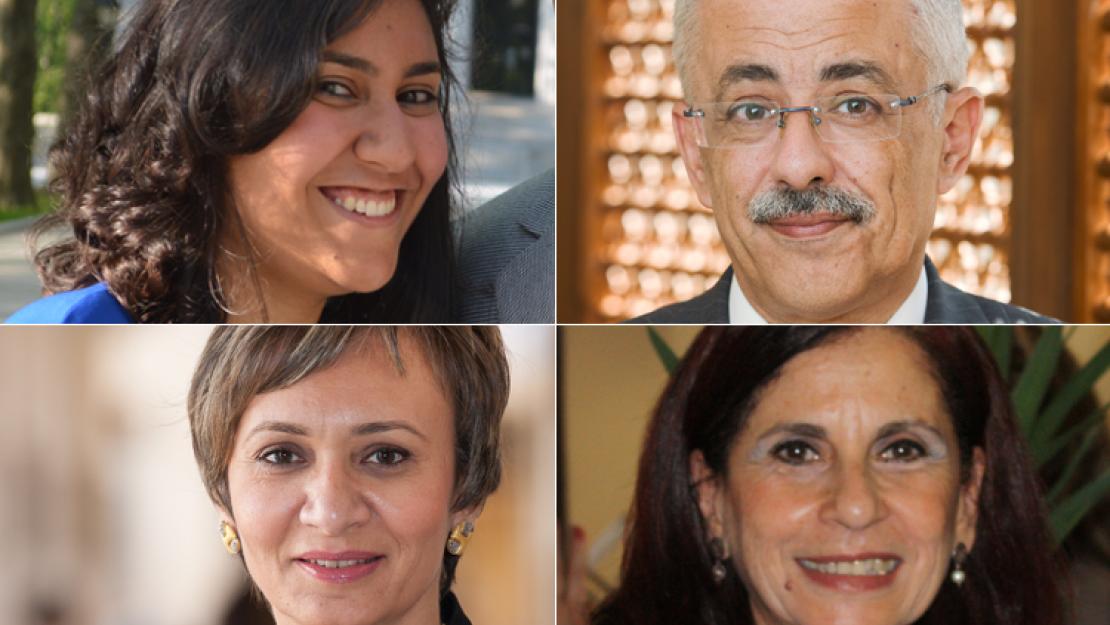 Helping to prepare a new generation of lifelong learners, five AUC faculty members –– out of a total of 11 advisers –– have been chosen to serve on the first Egyptian Specialized Council for Education and Scientific Research.

Tarek Shawki, dean of the School of Sciences and Engineering, is leading the council, which is affiliated to the Egyptian presidency and whose members are all volunteers, coming from diverse backgrounds and different universities in Egypt. In addition to Shawki, the four other AUC faculty members on the council are Amal Esawi, professor of mechanical engineering; Randa Abdel Karim, adjunct professor in the Department of Petroleum and Energy Engineering; Malak Zaalouk, professor of practice in the Graduate School of Education and director of the Middle East Institute for Higher Education at AUC; and Joyce Rafla, a pedagogy and assessment officer at AUC's Center for Learning and Teaching, where she provides curricular development and course redesigns, and a Professional Educator Diploma instructor in the Graduate School of Education. Rafla is the youngest member of the council.

"Having nearly half of the council comprised of AUC faculty members is a testament to the excellence and international reputation of our faculty, who are at the forefront of their fields," said AUC President Lisa Anderson. “Equally importantly, it demonstrates our deep commitment to playing critical and constructive roles in Egypt's advancement. We are very proud of these five faculty members, whose contributions and insights will not only strengthen scientific research and inquiry in Egypt, but will also help shape and reform the country's educational system –– an essential component of its development.”

According to Shawki, the council’s overarching mission is to focus on “building a scientific mind” among Egyptians. “The idea is to create a strategic think tank that sets the strategy for the next 20 to 30 years,” said Shawki.

The council’s main aim, Shawki continued, is to study, research and recommend courses of action on educational matters, provide practical and creative solutions to Egypt’s problems in education and scientific research, in addition to coordinating and creating synergy between the country’s various ministries and institutions in the field. The council will also set a national strategy for education and scientific research, study the successful models in other countries and build connections with various educational institutions around the world.

“We are proud that five AUC faculty members are part of this important council,” said Shawki. “I was pleasantly surprised when I found out that four of my colleagues were also chosen.”

Shawki is a distinguished academic, consultant and international education executive. Holding a PhD in engineering from Brown University, he served for 13 years as professor of theoretical and applied mechanics at the University of Illinois at Champaign-Urbana. He then spent more than a decade between Cairo and Paris working at UNESCO, where he was a key player in the development of several innovative programs related to education and technology. These include establishing a set of universal benchmarks for teacher competencies in the use of information and communications technologies, as well as developing a global, multilingual and digital library of high-quality, free e-courseware to students and teachers around the world.

Zaalouk welcomed the idea of the council, having been advocating for the establishment of such a body since 2007. “This council allows for institutional and collective decision making around issues of education as opposed to personalized individual preferences,” she said. “The council fosters continuity of educational visions and strategies that transcend changing governments and ministers, hence allowing for achievements to be made over time. It offers innovative, cost-effective solutions to educational challenges through pilot programs and projects, and provides policy briefs to facilitate their successful mainstreaming. All in all, it signals even more significance to educational reform and the importance of this sector, in addition to strengthening the tradition of evidence-based policymaking and research-based reform, particularly action research."

With bachelor’s and master’s degrees in political science and sociology, respectively, from AUC, a PhD in social anthropology from the University of Hull in the United Kingdom and a diploma in educational planning from the International Institute of Educational Planning in Paris, Zaalouk has both research and field experience in the area of education, both at pre-university and university levels, as well as in policy reform and program management. She served for five years as the regional senior education adviser for the Middle East and North Africa region at the UNICEF, where she also worked for 13 years as the chief of education programs in Cairo. “All council members have very diverse backgrounds, which is an asset, and there is always the option to draw on national and international expertise when needed in particular areas of specialization,” said Zaalouk. "We are encouraged to network with other entities in areas related to education, which would allow for a broader base for the success of the initiatives proposed."

With bachelor’s and master’s degrees in political science and sociology, respectively, from AUC, a PhD in social anthropology from the University of Hull in the United Kingdom and a diploma in educational planning from the International Institute of Educational Planning in Paris, Zaalouk has both research and field experience in the area of education, both at pre-university and university levels. “All council members have very diverse backgrounds, which is an asset, and there is always the option to draw on national and international expertise when needed in particular areas of specialization,” she said. For Esawi, who joined AUC in 2001, being a member of the council is a "huge responsibility," but she is "honored" to have been selected, since this council handles "one of the most important challenges facing Egypt,” she said. “Without well-educated youth and high-quality scientific research, Egypt will not develop into the country we are all dreaming of.”

After completing her bachelor’s in mechanical engineering (1989) and master’s in materials engineering (1990), both from AUC, Esawi earned her PhD in materials and manufacturing process selection (1995) from the University of Cambridge, where she served as a postdoctoral research associate at the Engineering Design Center. The research methodologies she developed during her PhD and postdoctoral research were implemented at the Cambridge Engineering Selector, one of the world’s leading teaching resources for materials in engineering, science, processing and design used by more than 600 universities worldwide. In 2009, Esawi received the prestigious State Encouragement Award and AUC's Excellence in Research and Creative Endeavors Award. In 2011, she was named the top-cited author by Elsevier Publishers for her work on aluminum-carbon nanotube composites. Esawi is also a chartered engineer registered in the United Kingdom and the country representative for the Institution of Mechanical Engineers.

Raflaa, who holds a Master of Arts in cognitive studies in education from Teachers College, Columbia University (2013) and a Bachelor of Arts in economics from AUC (2008), has worked with governmental and nongovernmental school teachers on their professional development. “It is very positive to see the government expressing interest and determination to fix education in Egypt,” she said. “We are happy to be part of this initiative because it’s a way of giving back to the community –– we are trying to fix education in Egypt to the best of our ability. There have been numerous reform efforts, but everyone is on a remote island; all these efforts need to be consolidated. We also have a lot of inspirational teachers in Egypt. Really, we do have the resources; we just need to organize them. Our ultimate aim is not just to eradicate illiteracy, but to produce a generation of thinkers."

Photo caption: top: Joyce Rafla, Tarek Shawki (top), Amal Esawi and Malak Zaalouk (bottom), along with Randa Abdel Karim, will be working to reform education in Egypt through their participation in the country's first Specialized Council for Education and Scientific Research