Faculty Concerned with Balance of Power in New Constitution Draft 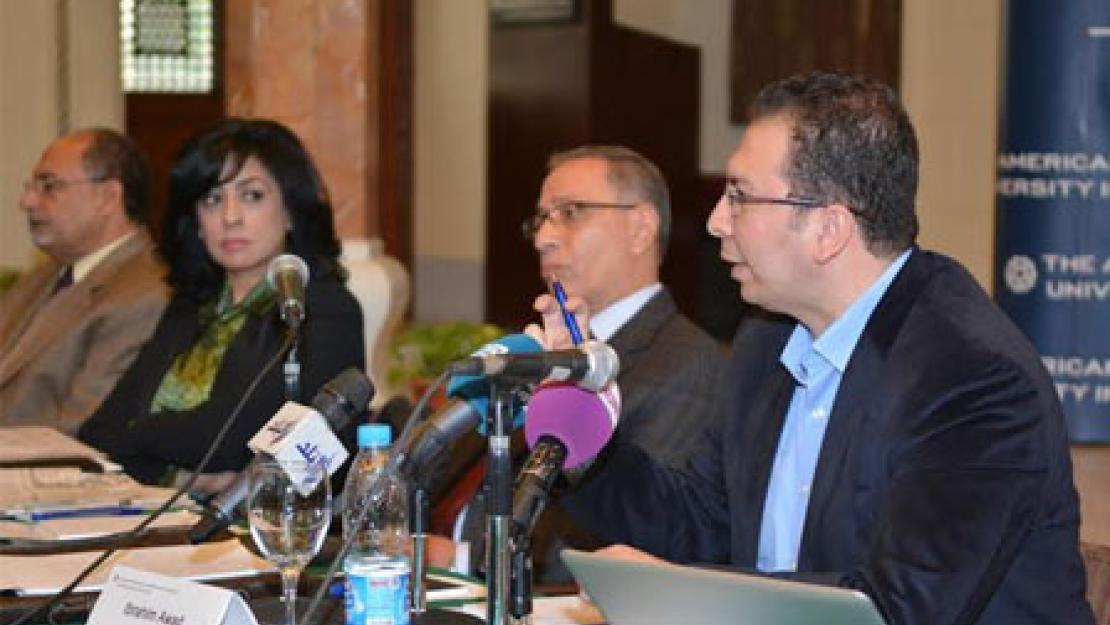 As Egyptians prepare to vote on the new draft constitution on January 14 and 15, faculty experts argue that although Egyptians are most likely to vote “yes” in the referendum, the constitution may not be able to truly impact the country’s underlying social, political and economic issues, and affords too much power to the military, police and judiciary.

“Although this constitution has the reputation of being well-situated to the different factions and clearly states sovereignty to the people, it has given immunity to the police, the armed forces and the judiciary,” said Ahmed Abd Rabou, assistant professor of comparative politics, in a media roundtable held on Sunday.

Abd Rabou was quick to point out, however, that criticizing the powers granted to the armed forces does not mean calling for its collapse. “The military institution is an integral part of modern Egypt, and we have great respect for it,” he noted. “We are criticizing its involvement in political matters. If we want a democratic state, the military should not be involved in politics.”

Sharing the same viewpoint, Abdel Fattah added that even though the military is the “last standing pillar of the state,” a nation cannot survive with one pillar alone. “We need to rebuild the rest of the state institutions,” he affirmed.

Mustapha Al-Sayyid, adjunct professor of political science, also noted the extent of power that the new draft constitution affords to the armed forces by citing Article 174, which allows the military trial of civilians.

Whereas Al-Sayyid acknowledged that there has been some progress in the new constitution regarding personal freedoms, he has several reservations about Article 31, which calls for the security of cyberspace and declares that the state is responsible for taking the necessary procedures to protect it. Al-Sayyid is concerned that this stipulation would allow the state to censor Internet content and prevent freedom of expression. Using vague terms such as “security of information” and “threat to national security” opens the doors to numerous interpretations, according to Al-Sayyid.

Commenting on the similarities between this new draft and the 1971 constitution, Ibrahim Awad, professor of practice at the Department of Public Policy and Administration and director of the Center for Migration and Refugee Studies, said, “This is a new yet old constitution, but we can’t expect [something] much different from the 50-member committee that drafted it. At the end, constitutions are the product of the social, economic and political structure of the state.”

Several faculty members also noted how the impact of the new constitution is limited by Egypt’s unstable social and political context. Abd Rabou believes that, in such a turbulent political climate, people are actually voting on the legitimacy of the constitution, not its content. He expressed hopes that this draft not become Egypt’s permanent constitution, since it was written in polarized times, similar to the 2012 constitution.

Despite their reservations, faculty members were optimistic that the draft constitution is a step in the right direction. As Moataz Abdel Fattah, professor of public policy and administration, put it, the constitution may not solve all of Egypt’s social and political problems, but with an enlightened elite and legislation, concerns about the constitution could be handled properly. “Our problems have always been ignorance, poverty, diseases and –– lately –– societal divisions,” he said. “The constitution marks a step forward in solving these problems.”

To watch the first part of the media roundtable,click here.

To watch the second part of the media roundtable,click here.