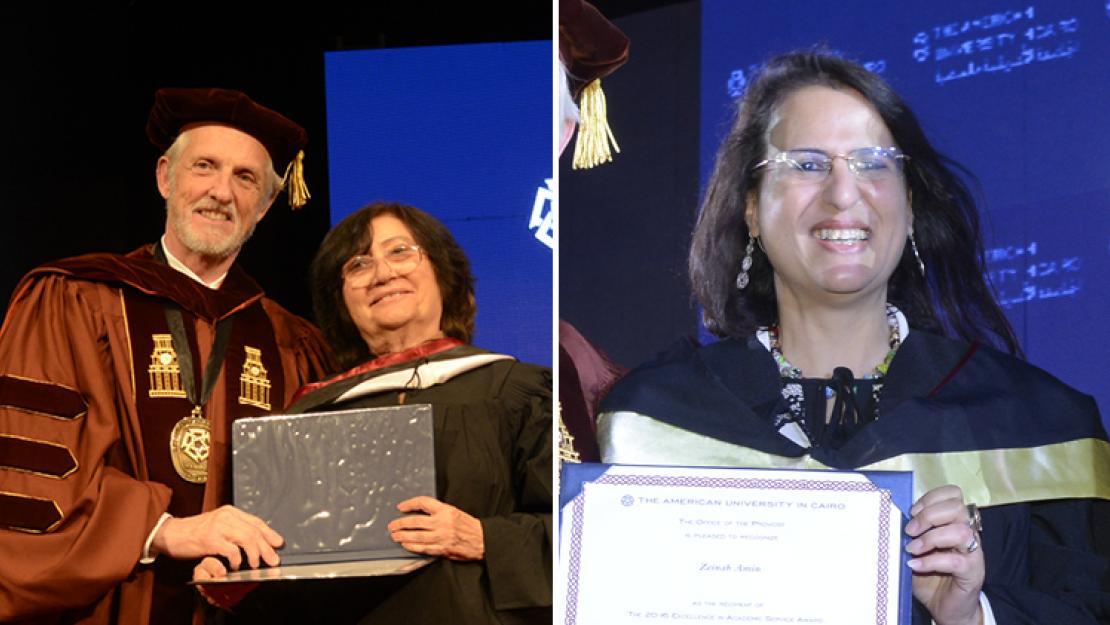 Recognized for their contributions, two faculty members were honored at the Spring 2016 commencement ceremony: Zeinab Amin, associate professor of the Department of Mathematics and Actuarial Science and director of the actuarial science program, received the Excellence in Academic Service Award, and Ferial Ghazoul, professor in the Department of English and Comparative Literature, was presented with the Excellence in Research and Creative Endeavors Award. The awardees were selected by a committee that included representatives from each school.

For Amin, there is no greater fulfillment than feeling her contributions at AUC have created a positive impact. “Receiving this recognition means that my hard work has paid off,” she said. “It's an inspiration and affirmation that being generous, giving your effort and time, and giving to the community without any rewards or expectations in return do not only create a positive impact on the community, but also for myself.”

Throughout her 10 years of service at AUC, Amin’s major contributions include designing a new minor in financial mathematics and restructuring the curriculum of the actuarial science program, which was classified as an advanced actuarial science program by the American Society of Actuaries in 2009 and received accreditation by the Supreme Council of National Universities. She also designed a new core capstone course, which introduces students to the role of enterprise risk management in mitigating loss and optimizing opportunity across a business. In 2009, she was awarded the Excellence in Teaching Award from AUC for her outstanding performance in helping students reach their full potential in various areas of AUC’s curricula.

Since Fall 2012, Amin has served as associate chair of the Department of Mathematics and Actuarial Science, director of the actuarial science program, and the founding adviser of the Actuarial Science Association, in addition to chairing the Senate Curriculum Committee, Departmental Academic Affairs Committee and Faculty Search Committee. She also served as a member of the Departmental Research Committee, a member of the Middle States Accreditation Steering Committee and co-chaired its Governance, Leadership and Administration working group, and supervised the Mathematics and Chemistry Lab.

"Amin is a dedicated advocate for the welfare and the development of AUC,"  said Ehab Abdel-Rahman, vice provost and physics professor. "Her leadership and excellent contributions to the University have resulted in a significantly improved and strategically important impact throughout the entire academic programs. Her contributions to service made a noticeable impact to the University, so it was not only a question of quantity of service but also leaving a mark on the University."

Ghazoul is the founding editor of Alif: Journal of Comparative Poetics, an annual interdisciplinary publication that is published in Arabic, English and French at AUC. She is currently on the advisory board of several journals and foundations, including Thaqafat, Fusul, Kitab-fi-jarida and The Arab Fund for Arts and Culture.

She was recognized for her distinguished record of past and continuing excellence in research. “Ferial Ghazoul has made an impact on shaping the comparative literature field by her continuity of research productivity since the 1980s and the volume of works published annually, including journal articles, book chapters and translations,” said Abdel-Rahman.

Ghazoul has published extensively on the medieval comparative literature and postcolonial studies. She is the author of two notable books titled The Arabian Nights: A Structural Analysis (1980) and Nocturnal Poetics: The Arabian Nights in Comparative Context (1996). She has also edited and co-edited several literary works including Arab Women Writers: A Critical Reference Guide (1873-1999), The View from Within: Writers and Critics on Contemporary Arabic Literature (1994), and Edward Said and Critical Decolonization (2007).

Ghazoul’s career as a translator earned her the Arkansas Arabic Translation Award for the translation of Matar’s Quartet of Joy (1997), and recently received a grant to translate the works written by the Bahraini poet, Qassim Haddad.