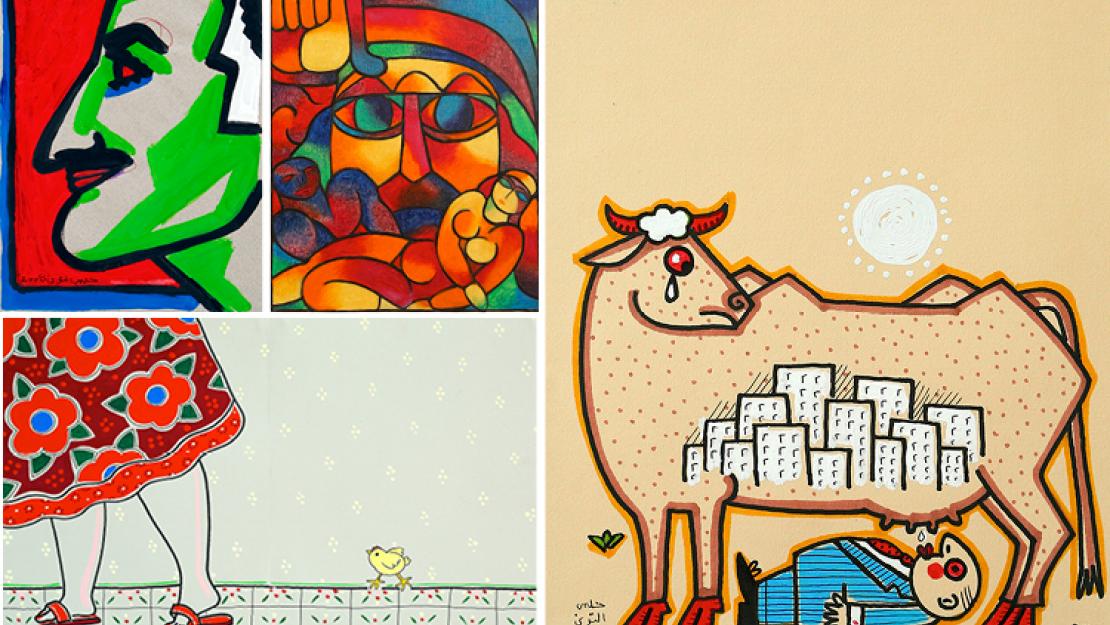 El-Touni: A Design Retrospective exhibition opened on Sunday, October 19, at the Sharjah Art Gallery, featuring original illustrations, designs, sketches and cartoons by Helmi el-Touni, one of the veterans of Arab graphic design. “Graphic design globally is a relatively new field, but in the case of the Arab world, it is a completely unchartered territory,” said Bahia Shehab, associate professor of professional practice in the Department of the Arts and director of the graphic design major at AUC. “We are leading the field in the region through the documentation and presentation of important Arab designers who have been working for decades without any formal recognition. The Arab world has an abundance of creative talent that has not been academically recognized, documented or studied.” Organized by the graphic design major, part of the Visual Cultures program at the Department of the Arts, the exhibition is the first in a series of projects that aim to trace the development of design in the Arab world. In addition to daily screening a film by Arab Loutfi featuring el-Touni on the second floor of the gallery, there will be a public talk by el-Touni himself and launch of the book, Hilmi el-Touni: Evoking Popular Arab Culture, published by Khatt books in Amsterdam and written by Yasmine Taan, on November 9 at AUC New Cairo. “We are hoping to introduce our audience to what graphic design is, as many people still do not know what we actually do, but we would like to also introduce them to one of the fathers of Arab graphic design –– Helmi el-Touni,” Shehab noted. “His body of work is not only visually appealing; it also documents key moments in our history as a nation.” Since the 1950s, el-Touni has created a multifaceted body of award-winning work that includes paintings, book covers, hundreds of magazine illustrations and children’s books, political posters and “some of the most iconic logos in Arab graphic design history,” Shehab pointed out. “His works are deeply rooted in local visual traditions while addressing the pressing social issues of his time, providing political commentary and examining notions of identity,” she said. Philip Meggs, author of A History of Graphic Design, defines the role of design as giving “order to information, form to ideas, expression and feeling to artifacts that document human experience.” “So graphic design is in our everyday lives, whether you notice it or not,” affirmed Shehab. “El-Touni’s books and illustration have already been a part of our everyday life for the past five decades. What we are doing in this exhibition is recognizing them as important and highlighting them as an integral aspect of our identity as Arabs.” El-Touni has collaborated with many publishing houses and periodicals in Egypt throughout his career. In the 1960s, he moved to Beirut, where he lived for 14 years and created numerous political posters, logos and children’s books, after which he returned to Egypt in the mid-1980s and was commissioned by Dar Al-Shorouk to develop a wide range of works that include children’s books, book covers and magazine op-eds. He also spent these years collaborating with newspapers, magazines and publishers from different parts of the Arab world, including Kuwait and Sudan. “Helmi el-Touni is our first step toward the study and understanding of our modern visual heritage, and we are hoping to host yearly shows either on a key Arab designer, an important Arab institution or simply an Arab idea that has contributed to the shaping of our modern identity,” explained Shehab. “At the forefront of this quest are our students who always play a key role. We do our best to involve them in every phase of the process, so they get to study the subject in detail; produce work around it, thus engaging with it conceptually and creatively; and eventually they help bring it to life through the exhibition. In that, we are linking our past with our future in the hope that our students will do a better job at preserving their heritage than what our predecessor have done.” She added, “It is el-Touni’s 80th birthday this year, and our whole team of faculty and students has worked with a lot of dedication and passion for the past few months, so we promise you a great show.” El-Touni: A Design Retrospective is open until November 13, everyday from 9 am to 4 pm, except on Fridays. For more information, email Bahia Shehab (bahia@aucegypt.edu); Nagla Samir, co-curator of the exhibition (naglasamir@aucegypt.edu); or Kaya Behkalam, director of the Sharjah Art Gallery (kaya@aucegypt.edu).