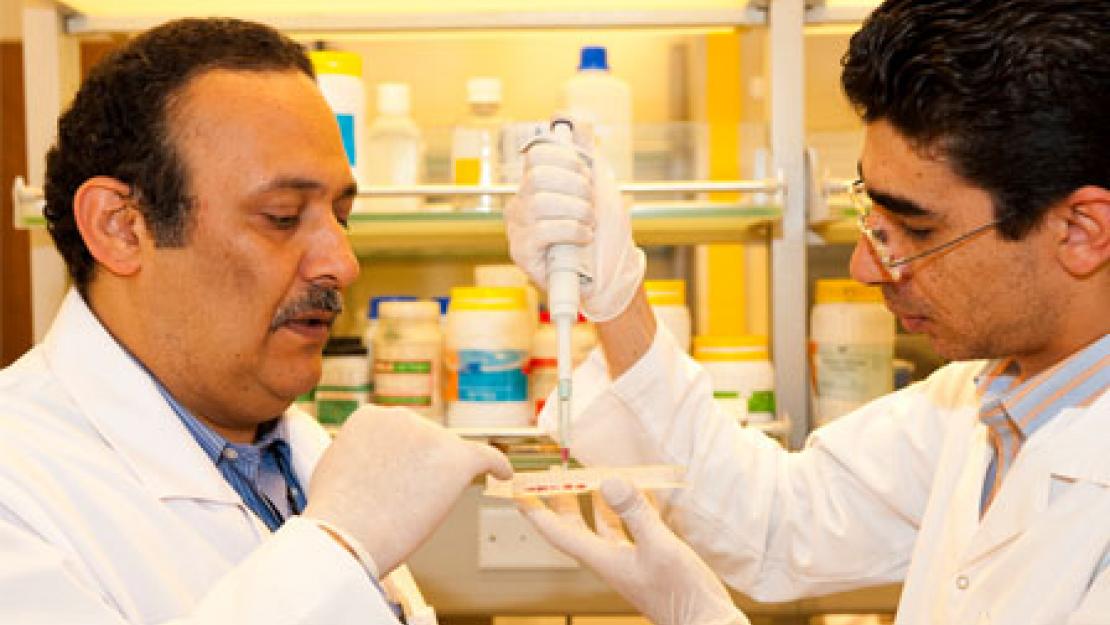 Egypt has the greatest burden of hepatitis C infection worldwide, with 10 percent of people between 15 and 59 years living with the virus. While Egypt has one of the highest rates of the virus, which affects an estimated 170 million people across the world, testing for the disease is out of reach for many due to the cost and lack of awareness about the issue. D-Kimia, a private corporation based on knowledge, research and technologies developed at AUC, develops novel and affordable diagnostic solutions to detect a broad range of diseases, initially focusing on the identification of the hepatitis C virus.

“AUC has granted D-Kimia the exclusive license to four patent pending technologies developed at the Novel Diagnostics and Therapeutics Lab at AUC under the direction of Professor Hassan Azzazy,” said Karim Hussein, co-founder and chief operating officer of D-Kimia. Hussein, an entrepreneur who has led innovation and product development at several global health care and technology companies, added that a sponsored research agreement was signed between AUC and D-Kimia, enabling the company to access labs and equipment at AUC’s School of Sciences and Engineering. D-Kimia has also been selected to participate in the first incubation cycle of AUC’s Venture Lab, conducted by the Entrepreneurship and Innovation Program at the School of Business.

Any infectious disease can only be managed through three approaches — vaccination, containment and/or treatment. “Unfortunately, there is no vaccine for hepatitis C,” explained Hassan Azzazy, professor of chemistry at AUC and co-founder and chief scientist of D-Kimia. “To contain hepatitis C, we need to first know who is infected and then build awareness on ways to limit the spread of the disease. Most Egyptians are not tested for hepatitis C and do not know if they have the disease, so they may unwittingly infect their family and friends. Widespread testing has been limited due to the high cost and complexity of the test and limited awareness.”

D-Kimia plans to provide a more affordable and simple approach to testing to help control the disease. It develops diagnostic tests that utilize gold nanoparticles to detect specific nucleic acid sequences of a wide range of targets including viruses, bacteria and genes associated with cancer. Another line of assays is capable of detecting protein biomarkers of infectious or other diseases. “The nanoparticle-based assays are simple, accurate, affordable and generate results much faster than comparable technologies,” affirmed Azzazy.

There are national, regional and global demands to reduce the cost of laboratory tests and to generate fast and accurate results using minimally invasive techniques. “The developed assays meet such demands, as they allow quick and direct detection of microbial and cancer-related genes in serum, sputum and urine,” said Azzazy. “They eliminate the need for expensive complicated instruments, advanced infrastructure and highly skilled technicians.” Azzazy noted that the new assays would support national efforts to control major illnesses in Egypt such as hepatitis C virus infection and cancer, allowing Egypt to become competitive in the global market of in vitro diagnostics.

Hussein said that D-Kimia plans to rapidly market and distribute the product worldwide, particularly in regions with high prevalence of hepatitis C. In addition, the company plans to further develop its diagnostic platform to identify the nucleic acid signature of a range of viruses and genetic disease markers including tuberculosis, malaria, breast cancer and bladder cancer. “We are also exploring the use of our platform to rapidly identify the new and deadly MERS Corona Virus,” Azzazy noted. In addition to being based in Cairo, a U.S.-based arm of D-Kimia will be established in the near future.

Besides developing nanodiagnostic assays, Azzazy pointed out that his team members have gained invaluable expertise in developing local spinoff companies that could be shared with others in Egypt and the region. “It is expected that competitive researchers in Egyptian and Middle Eastern universities will follow the AUC model and develop their own spinoff companies,” he said.

Emphasizing that this initiative provides a leading example for how higher education institutions can support the commercialization of innovative research ideas developed inside universities, AUC President Lisa Anderson noted, “The launch of Egypt’s first University spinoff company is an important milestone in our collective efforts to ensure that leading research taking place inside the laboratories on our University campuses is fully utilized to the benefit of society. AUC is part of a global movement of higher education institutions committed to benefiting from the talents of distinguished researchers like Professor Hassan Azzazy to address pressing needs in their communities and around the world.”

Azzazy explained how AUC helped in the different stages of establishing the company. “The well-equipped laboratories in the Yousef Jameel Science and Technology Research Center and the Department of Chemistry were essential for developing the technologies,” he said. “The competitive advanced graduate programs in biotechnology, nanotechnology and chemistry, which attract top students from the entire country, have allowed recruiting skilled researchers. The Technology Transfer Office and AUC lawyers have helped in logistics and negotiations throughout the process, which took almost two years.”

Ahmed Ellaithy, director of the Technology Transfer Office, noted that “such knowledge-based companies have the potential of expanding rapidly, thereby contributing significantly to the national economy and providing excellent employment opportunities. Companies like Gatorade, Google, Genentech and RIM are examples of university spinoffs that grew to offer successful global products. The impact of these on the national economy is significant, with thousands of jobs created, taxes paid on wages and revenues, and national exports.”

Photo caption: Azzazy with a doctoral student in the biotechnology group at the Yousef Jameel Science and Technology Research Center, examining the color signals generated by gold nanoparticles used to develop sensitive tests for direct detection of the hepatitis C virus in human serum