Egyptian Ambassador to Czech Republic: AUC is an Incubator for Innovation 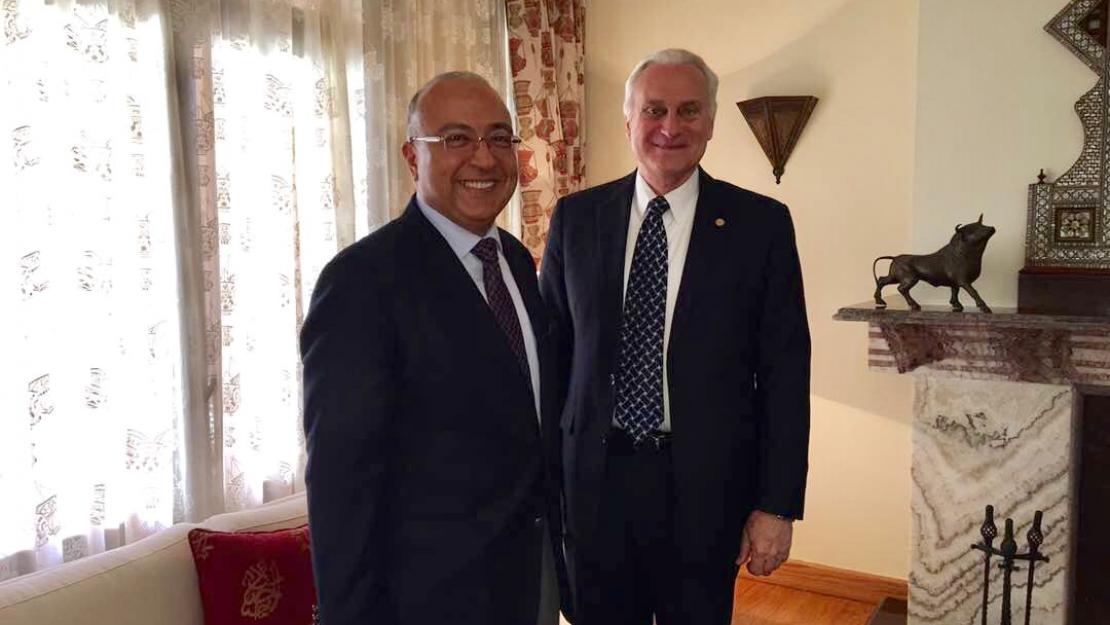 Highlighting AUC’s role in the larger global community, Ambassador Abderahman Salaheldin, the Egyptian ambassador to the Czech Republic, noted, “AUC has great capabilities for research, training and education, not only beneficial for Egyptians but for Arabs in the region as well. I see potential for developing this position further.”

Salaheldin recently visited AUC and met with President Francis J. Ricciardone and Atef Eltoukhy ’74, chairman of AUC’s Board of Trustees.

Beginning a Career in Foreign Affairs

Salaheldin graduated from Cairo University with a degree in political science. “My interest in foreign policy and relations with the United States and international organizations came naturally. I began in 1980, and it is now my 37th year in this career,” he said.

Salaheldin was exposed to AUC’s resources as a university student, actively participating in extracurricular activities between both schools. “While in university,” he reflected, “I used the facilities at AUC Tahrir Square extensively, particularly the library. I was always a participant in AUC seminars, symposiums and even organized joint events with Cairo University as a member of the Student Union.”

With years of experience collaborating with different universities in his various positions, Salaheldin views AUC as an important institution in the Arab world. “I see AUC as an Egyptian institution first, and I think we should focus on its Egyptian, Arab, Middle Eastern and even Islamic nature,” he explained.

Salaheldin also perceives AUC as well-situated to expand entrepreneurial opportunities in Egypt. “AUC can work as an incubator and can open a window of opportunities for foreign investors interested in young Egyptian minds and talents that can develop innovative ideas,” he shared.

He noted that AUC has a great resource in its Board of Trustees Chairman Atef Eltoukhy. “He is a great entrepreneur with an Egyptian and American background and a great link to the Egyptian community abroad, the Bay Area and Silicon Valley,” he continued.

Now in the Czech Republic, he observes the possibility of collaboration between Czech universities and universities in Egypt, including AUC. “I am currently working on developing further cooperation with Egyptian universities,” he noted.

Salaheldin has encountered a range of challenges in his career. “A personal challenge was for my children to adapt to different cultural and social environments,” he shared.

He noted, however, that even with these obstacles, he has maintained a passion for his work. “Like any job in this field, there are challenges that we like and welcome because we have the opportunity to truly improve relations between nations,” he explained.

While posted in Washington, D.C. at the Embassy of Egypt, Salaheldin was confronted with the first and second Gulf Wars. “Egypt and the United States worked hand-in-hand to reverse the invasion of Kuwait in 1990, and our cooperation worked,” he shared.

While serving at the United Nations as a political counselor between 1992 and 1996, he witnessed the imposition of many sanctions on Arab countries. “Egypt was a member of the Security Council at the time, and we played a major role in alleviating the impact of the sanctions on people. We wanted to sanction those violating international law, but not those people who were innocent,” he explained.

Salheldin later served as Egypt’s consul general in San Francisco from 2004 to 2008, working on a variety of community-related, political and economic challenges. “One of my main tasks was economic promotion for relations between Egypt and the United States,” he said.

His ambassadorship in Turkey between 2010 and 2013 came at turbulent time in the country. “We had previously developed the relationship between Egypt and Turkey to unprecedented levels, both economically and politically,” he said, reflecting on the impact of the Arab Spring on relations.

At various points in time, Salaheldin has also served in Egypt at the Ministry of Foreign Affairs, handling Arab, Middle Eastern and foreign affairs as well as maintaining relations with international organizations. He has continued in his position as assistant foreign minister for Middle Eastern and Arab affairs since 2014.

Deepening educational and cultural exchange has been a central focus throughout Salaheldin’s career. “As consul general, I hosted all of our Egyptian university presidents and helped with fundraising for all universities, including AUC,” he shared.

“I enjoyed most cooperating with American universities in California as well as universities in 10 other western states, where I would go to give lectures on Egypt, diplomacy and crisis management,” he added. “This was really the highlight of my consular time.”