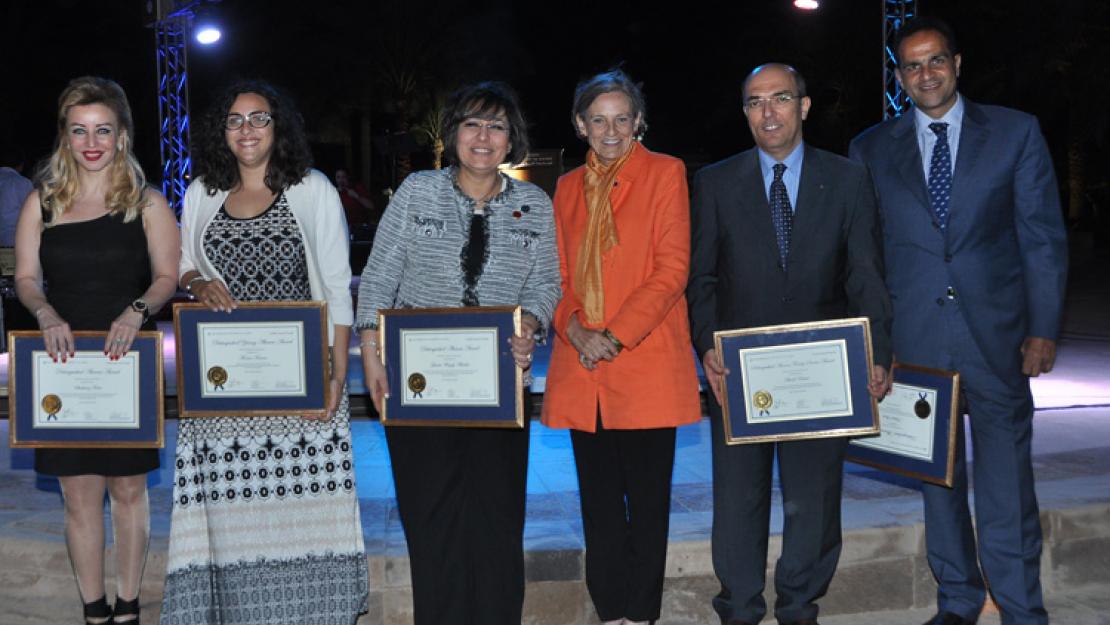 During the annual Alumni Awards Ceremony held last Friday, five alumni were recognized for their distinctive achievements and exceptional dedication to their careers and communities.

This year’s recipients of the Distinguished Alumni Award are Ghada Wagdy ’87, head of the operational risk department of Arab Bank and president of the Parents Association at AUC; Khaled Sheta ’87, vice chair and chief executive officer of the International Group for Investment in Egypt, where he has been responsible for the planning, development and implementation of new expansion plans and projects; and Shahinaz Foda ’89, ’93, deputy managing director, board member and head of treasury, fixed income and wealth management at Emirates NBD Egypt. The three awardees have earned a bachelor's in business administration from AUC.

"I feel that AUC has set the cornerstone for all what I am today," said Wagdy, who has an extensive 25-year career in the banking sector. "I'm truly honored and really proud of being an AUCian.

Two other awards were presented at the ceremony: the Distinguished Alumni Faculty Service Award, which was given to Sherif Kamel ’87, ’90, ’13, dean of AUC’s School of Business; and the Distinguished Young Alumni Award, which was presented to Monica Hanna ’04, ’07, who was recognized this year by Saving Antiquities for Everyone for exposing the looting of ancient archaeological sites.

Kamel became the founding dean of the University’s School of Business in 2009 and is also professor of management information systems. During his time as dean, the School of Business received global recognition and accreditation for several of its programs, particularly the Master of Business Administration (MBA) program, and a number of initiatives were launched including the Entrepreneurship and Innovation Program, the AUC Venture Lab, the Master of Science in finance and the Executive Master of Business Administration. Kamel earned a bachelor’s in business administration in 1987, an MBA in 1990 and a Master of Arts in Islamic art and architecture in 2013 –– all from AUC. He holds a PhD in information systems from the London School of Economics and Political Science.

“Throughout my career,” said Kamel, “I've been in many ways committed to education and lifelong learning service. To be recognized today by my alma mater for the Distinguished Alumni Faculty Service Award is a great honor, and its coinciding with my class's silver reunion renders the moment far more memorable. I've always stressed that continuous improvement is a journey rather than a destination. You never get there, but you keep trying for the betterment of society. I am certain that the transformational change that the AUC School of Business has been witnessing is a big step toward that elusive goal.”

Hanna was recently recognized by the New York-based Saving Antiquities for Everyone (SAFE) nonprofit organization for her outstanding achievements in raising public awareness of Egypt's endangered cultural heritage and the devastating consequences of the illicit antiquities trade in Egypt. She was presented with the 2014 SAFE Beacon Award and voted one of the seven People of the Year by Egypt Today magazine. She graduated from AUC with a bachelor’s in Egyptology in 2004 and a master’s in teaching English as a foreign language in 2007. She currently teaches scientific writing at AUC’s Department of Rhetoric and Composition. “I am very glad to receive such an award from my home institution,” Hanna affirmed. “AUC has been the reason I am that successful today. If it weren't for its liberal arts, I would not have had the chance to study Egyptology and archaeological chemistry. My professors at AUC have always been encouraging me to do better and to do more, which was the driving force I have had to continue striving for the change we all dream of in the field of Egyptian heritage.” Previous alumni award winners have included Yousef Abdul Latif Jameel ’68, Nadia Makram Ebeid (MA ’77), Lobna Abdel Aziz ’54, Laila Rustom ’56, Lawrence Wright (MA ’71) and Yosri Fouda (MA ’92). Photo caption: Shahinaz Foda, Monica Hanna, Ghada Wagdy, AUC President Lisa Anderson, Sherif Kamel and Khaled Sheta at the annual Alumni Awards Ceremony held on May 9, 2014