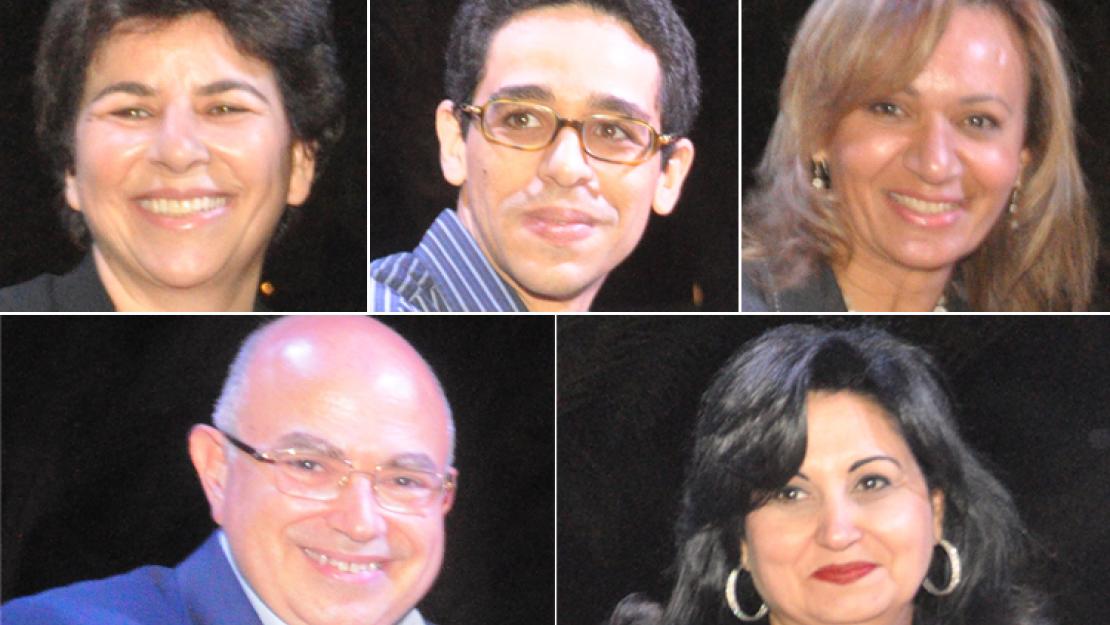 Five distinguished alumni were recognized at this year’s Alumni Awards Ceremony for their professional achievements and contributions.

This year's recipients of the Distinguished Alumni Award are:

The recipient of the Distinguished Alumni Faculty Service Award is:

And the Distinguished Young Alumni Award was presented to:

With a diplomatic career spanning more than 30 years, Abdelnasser was Egypt’s ambassador to Japan (2007 – 2011) and worked in a multitude of international organizations, including the United Nations and World Trade Organization. Some of his distinguished posts include serving as director-general of policy planning and crisis management at the Egyptian Ministry of Foreign Affairs, deputy chief of mission at the Egyptian Embassy in Washington, D.C., as well as director of the Institute for Diplomatic Studies and the Cairo Regional Center for Training in Peacekeeping and Dispute Settlement in Africa. Most recently, in 2014, he chaired the Council of Arab Permanent Representatives in Geneva and was coordinator of the UN Conference on Disarmament.

Abdelnasser is the author of 22 books in Arabic and three in English, and is a contributor to nine books in Arabic, English and French. He is a member of the Egyptian Council of Foreign Affairs and the Egyptian Writers Association. He holds a bachelor's and master's in political science from AUC, and a PhD in the same field from Geneva University.

"I am so thrilled, pleased and honored to have been offered the Distinguished Alumni Award by the AUC president. I feel that the diverse and enormous achievements in the interests of my country Egypt, my people and my University, which I accomplished and delivered over more than three decades and half, since I joined AUC as undergraduate student in September 1979, are paying off and are being recognized by my alma mater. I, in turn, offer this award to the memory of my late parents, to my wife Dahlia, and to my two sons Omar and Mohamed. I definitely plan to pursue my committed path of contributing to the good of my country Egypt, to my people, to my family, to the whole of humanity, as well as to my alma mater, AUC, in the way I see as serving their best interests."

Before assuming her current position at the Ministry of International Cooperation, Bakr worked in multinational corporations, including serving as communications director of Lafarge, a leading cement producer worldwide. She was also an independent consultant to United Nations Development Programme projects that focused on democracy in North Africa.

Bakr has published and lectured on international and security issues, and is a volunteer contributor of a weekly article in Al Ahram Al-Iktisadi. She has been an adjunct professor at AUC from the past nine years, teaching courses on international organizations and human rights. She earned her bachelor's and master's from AUC, and her PD in international relations and organizations from Cairo University. She also studied at the National Defense University in Washington, D.C. and participated in Columbia University’s Summer Workshop on Analysis of Military Operations and Strategy.

"It is a gratifying honor to be among those who received the Distinguished Alumni Award from AUC. I am proud to be an alumna of a thriving University that inspires its graduates to continue dedicated efforts in all of life’s domains."

Previously the marketing manager of PepsiCo Foods Egypt and the marketing research planning manager of Procter and Gamble Egypt, Abdou quit her job in 1996 and founded Marketing Mix, a marketing endeavor to support local companies that succeeded in turning around several Egyptian brands and launching major ones from scratch. The success stories earned her recognition by the Ministry of Investment in 2007 for her positive contributions to the Egyptian economy.

She also co-founded Creative Lab Advertising, which grew to handle major leading local, regional and multinational brands, and in 2014, she founded Madroos initiative, which aims to spread practical marketing knowledge among junior marketeers and marketing students. In recognition of her efforts, Abdou was featured by Wharton University in Arab Women Rising: 35 Arab Women Entrepreneurs Making a Difference and was selected by Egypt Today magazine as one of “Ten Dynamos Who Will Shape Egypt in the Next Decade.”

Abdou holds a bachelor's in mass communication from AUC and a master's in international marketing from University of Strathclyde, Scotland. She is also a Chevening scholar.

“I feel thankful, honored, motivated, energized and hopeful with this award.”

One of the founding members of AUC’s Yousef Jameel Science and Technology Research Center, the first nanotechnology research center in Egypt, Esaw is a member of the recently established Specialized Council for Education and Scientific Research in Egypt, which is mandated to advise the presidency on issues related to education and scientific research and to propose out-of-the-box and practical solutions. She was also recently appointed as associate dean of graduate studies and research at AUC’s School of Sciences and Engineering.

Esawi is the recipient of the Egyptian National Award in Engineering Sciences (2009), which is granted annually by the Egyptian Academy of Scientific Research and Technology in recognition of outstanding research achievements nationwide. She also received AUC’s Excellence in Research and Creative Endeavors award during the same year. In addition, Esawi is Egypt’s representative at the Institution of Mechanical Engineers, based in the United Kingdom.

“I am really pleased and honored to receive this award, and hold sincere gratitude to those who nominated me and the committee that selected me. At the awards ceremony, I met and reunited with many dear friends and classmates, each exceptional and distinguished in their own fields. Many are doing amazing work, not necessarily related to what they studied. It tells you something about this special University. It not only gave us an outstanding technical education, but also taught us how to become lifelong learners, thinkers, inquirers, risk-takers, entrepreneurs and well-rounded individuals.”

Rafea founded Bey2ollak.com as a cross-platform mobile application for people to share information about traffic in Egypt on a daily basis. He has more than seven years of experience in the IT sector, where he has been exposed to a wide range of projects and clients through his posts in IBM, ITWorx and Infinity. He holds a bachelor's in computer science and an MBA from AUC. He is an active member of the esteemed Endeavor network, which selected him as one of the high-impact entrepreneurs in emerging markets.

“I am highly honored to receive such an esteemed award. For me, Bey2ollak.com success in Egypt is a first step toward international expansion and more impactful projects.”