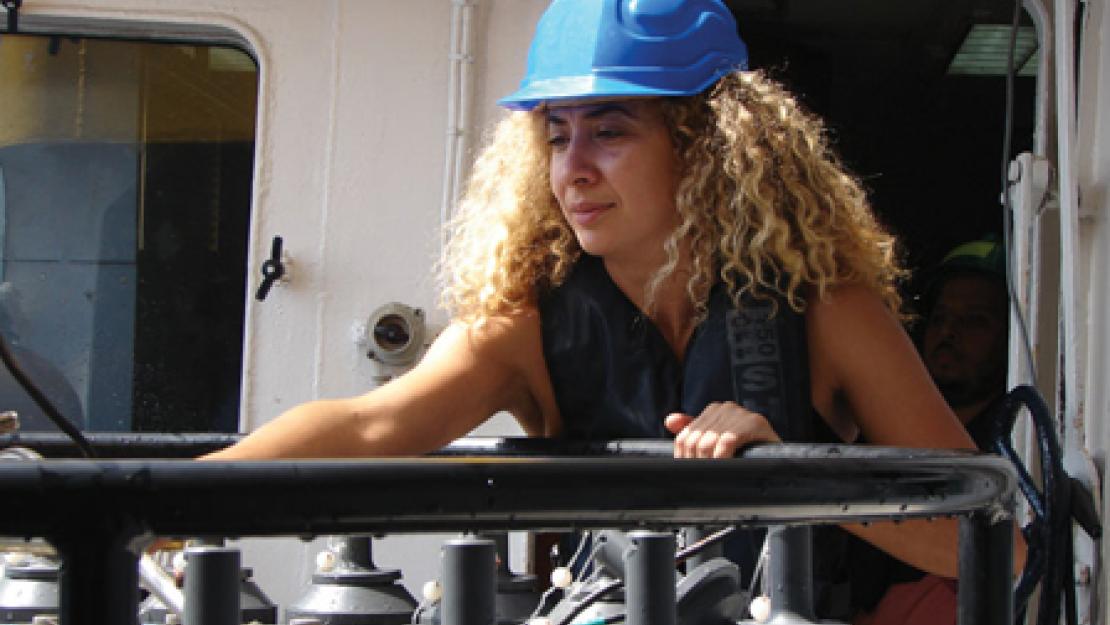 It is 4 am, and research vessel RV/Aegeo has set sail into uncharted territory. For the 60 experts who are occupying the boat, rising at an unearthly hour is not a deterrent. Long before then, the vessel has been bustling with activity, with crew members skillfully navigating the waterways and biologists clustering around lab equipment. As the RV/Aegeo approaches its intended destination, monitors begin to beep, signaling the deployment of samplers into the deep and enigmatic waters of the Red Sea.

This expedition is part of a collaborative project between AUC and the King Abdullah University of Science and Technology to examine microbial life in marine systems. Tapping into unfamiliar areas in the Red Sea, experts conducted a close study of brine pools, coral reefs and seabed sediments that are characterized by inhospitable conditions. The areas were scanned for the existence of extremophilic microorganisms, which can survive extreme conditions such as the lack of oxygen, high salinity, harsh temperatures and intense pressure. “Our research addresses unanswered questions on the evolution of microbial life and their potential utilization in biotechnological and pharmaceutical industries,” said Rania Siam, chair of the Department of Biology who led the research team. “Never before has an enzyme been extracted from such the severe environments of in the Red Sea, and it leaves us wondering how we can employ this discovery in practical applications.”

Siam’s quest for life in hostile waters involved the study of five poorly explored brine pools, including the Atlantis II and Discovery Deep pools. These pools are the least researched marine ecosystems in the region. Atlantis II is located in the central rift of the Red Sea, at a depth of 2,200 meters and temperature of 70 degrees Celsius. Not only is the pool eight times saltier than the Red Sea’s surface water, but it also hosts a diverse spectrum of heavy metals at very high, toxic concentrations. “Many industries are looking to use these enduring enzymes because they want to optimize their industrial practices,” explained Siam. “Microbes that can withstand such harsh conditions have evolved sophisticated processes to withstand its’ habitat and, therefore, have profound uses.”

Initially, commercial processes employed untreated enzymes, but with time, manufacturers realized that natural enzymes were not optimal components. Through genetic engineering, the introduction of improved engineered proteins, many enzymes were genetically modified to be more effective at the higher temperatures and acidity levels, as well as other difficult manufacturing conditions that would otherwise inhibit enzyme activity. “Our enzymes thrive in harsh settings because they were isolated from such an environment and so they are naturally genetically modified,” said Siam. “This is useful for many applications and manufacturers.”

Siam and her group recently submitted a patent for such an extremophilic enzyme, adapted to function in conditions of extreme temperature, pressure and heavy metal concentration. Isolated from one of the Red Sea brine pools, the enzyme has vast potential for use in various industries including detergents, pulp and paper, leather, dairy products, sweeteners, the biofuels market and pharmaceuticals.

In detergents, this special enzyme may be used to disintegrate proteins that cause stains. “A prevalent area of research is the investigation of thermotolerant enzymes,” explained Siam. “The search for these kinds of enzymes spans the globe, since they are especially desirable for improving laundry processes in hot-water cycles and for the removal of difficult stains. This would give detergent manufacturers an edge within the industry.”

Humans have been using enzymes in food-manufacturing processes for many years. The production of certain foods, such as beer, vinegar and cheese, was possible because of enzymes in the yeasts and bacteria that were utilized. “Biotechnology has made it possible to segregate and identify various enzyme qualities that are required in these food processes,” said Siam. “It has allowed the development of specialized strains, which may aid in improving the flavor and quality of food products. Some enzymes may be used to make the process cheaper and more predictable, while other enzymes prolong expiry dates, stabilize food products, or control alcohol and sugar content.”

Siam’s recent discoveries also have vast applications in the paper and pulp industry. “Enzymes are used in the pulp and paper industry for the removal of ‘stickies,’ the glues, adhesives and coatings that are introduced to pulp during recycling of paper,” she said. “Chemical methods for the removal of stickies have traditionally not been 100 percent effective. In more recent years, there has been a greater tendency to use enzymes in removing stickies, but because these enzymes are typically only functional at moderate temperatures and acidity, this approach is not without limitations. Our enzymes can withstand these difficult conditions, and it is our hope that they revolutionize the recycling process."

Additionally, enzymes and peptides are used in mainstream medicine. “We are currently researching therapeutic enzyme uses and looking at potential antimicrobial drugs,” said Siam. “These can be antibiotics or antifungal drugs that could be used in the treatment of several infectious diseases that have developed resistance to the currently prescribed antimicrobial treatments. Because of the mutational capability of these contagious agents, a constant need for new therapeutic drugs is an ongoing research.”

Siam and her team study the collective DNA maps of bacteria, from which enzymes are extracted, at AUC’s High Throughput Genomic facility in the Department of Biology and the biotechnology lab of the Yousef Jameel Science and Technology Research Center, where the samples are brought back for DNA isolation and sequencing –– a process by which accurate and quantitative deciphering of the DNA is performed. “By analyzing DNA,” explained Siam, “we have an understanding of the genetic makeup of biological life in this particular community. Rather than studying life in such extreme environments by inspecting microorganisms with the naked eye or through the use of a microscope, which is not possible at such depth and condition, we use the DNA we isolate to give us an idea about biological life in places where we can’t take a microscope or visualize ourselves.”

In addition, by analyzing the DNA, scientists gain an understanding of the genes, as well as their translated proteins that allows them to reside in such an environment. “Not only does this elucidate how life exists in extreme environments, it also provides indications about potential biotechnological and pharmaceutical applications,” said Siam, who hopes to contribute to the regional scientific advancement by establishing a comprehensive environmental genomics database. “Our Red Sea genomic dataset is a wealth of information, not only to understand our surrounding marine environment, but it also provides a natural resource of potential biotechnology products. The accessibility of this database means that this information is readily available for researchers everywhere.”