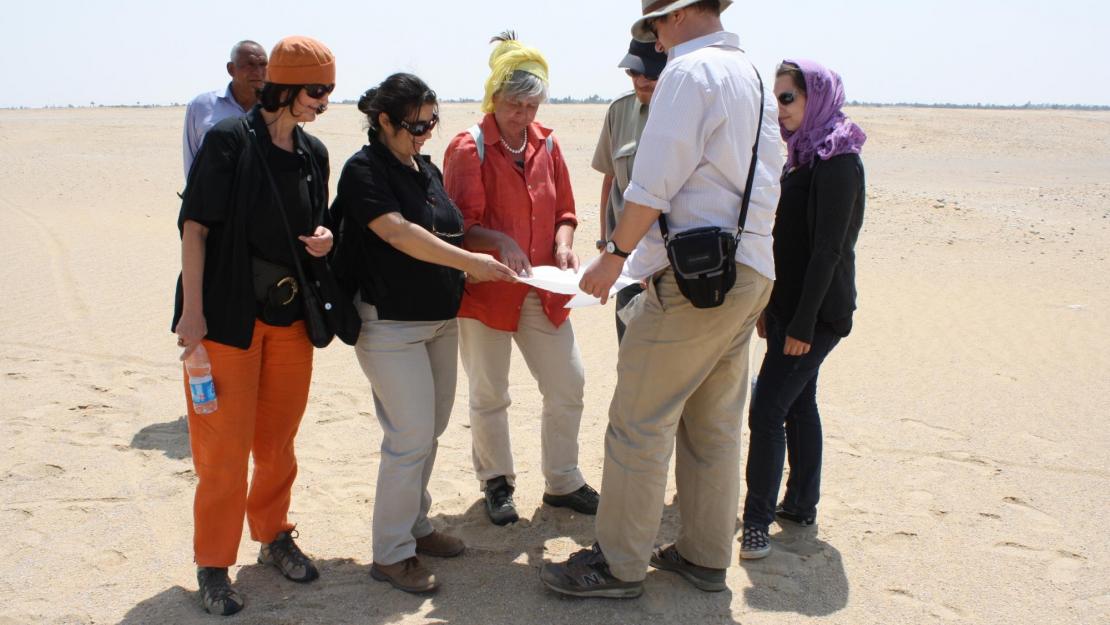 For Cornelia Römer, Egyptian Chair in Coptic Heritage at AUC, papyrology builds bridges between religions in modern-day Egypt and in the past.

“I find very interesting how my students react to different topics, and I have the impression that they themselves also find it interesting,” said Römer, who is also a visiting professor in the Department of Sociology, Anthropology, Psychology and Egyptology (SAPE). “In my class at AUC, I have six students: two Copts, one Catholic student and three Muslim students. I find that for the Muslim students, it is more difficult to recognize images that are from the New Testament, but after I explain it, very often we find that this story is also from the Quran. Our class builds a bridge in a sense between different times and religions.”

At her lecture this week titled "The River Nile in Late Antiquity: Pharaonic and Other Traditions in Culture and Thought of the Early Coptic Community," Römer will explore the impact Christianity had on Egyptians’ ways of thinking about the Nile flood and how these changes reflect the mentality and culture of early Coptic society. “The Nile’s flood is a natural phenomenon that has occurred throughout the Pharaonic and Greco-Roman times as well as this new period. With Christianity, people’s attitudes about natural phenomenon changed. I’m looking to pinpoint these differences and explain how they connect to modern day Egypt. Was it that people referred back to the Pharaonic period in their attitude towards the river or did they turn more toward the Greco-Roman period?”

“We find that people’s attitudes were a continuation of the Greco-Roman tradition as reflected through their continuation of Greco-Roman depictions of the Nile river god,” Römer explained.  “I think it has to do that the language of the church was Greek in the beginning, not Coptic. Though Christianity came to be widespread, in the beginning it seemed to be widespread among the upper tiers of society, and Greek culture was a marker of status. I think it also is because the early Christians wanted to show that their religion was not the Pharaonic religion. In the third century, there were still Pharaonic temples all around them, so Christians wanted to have different images from that pagan background.”

Römer’s own interest in papyrology and Coptic studies was sparked by her passion for classics. “I first studied classics and Greek literature at the University of Cologne and soon became very interested in papyrology, that is the subject of Greek texts written on papyrus. From there, I was director of the Papyrus Collection in Cologne, which houses one of the largest papyrus collections in Germany, and it was here that I first got interested in Coptic studies for the collection contained not only Greek texts, but also Coptic and Demotic texts.”

Researching papyrology and Coptic studies, Römer’s distinguished career led her across Europe, Egypt and finally to AUC this year as the Egyptian Chair in Coptic Heritage, established in 2003 to support a visiting professor teaching courses and conducting research in the field of Coptic studies. The position provides students and faculty members alike the opportunity to study the linguistics, theology and history of Coptic culture, as well as its role in modern society.

While at AUC this semester, Römer hopes to share these interests with the University community. “In general, I teach my students the cultural side of Coptic studies. For example, what happened when Egypt became part of the Byzantine Empire in roughly 330 AD? What happened then when Christianity became the main religion in Egypt? What was the people’s attitude toward the world in general, and therefore what changed in that time in their attitudes towards the river Nile?”

Römer also looks to share her interests in papyrology and Coptic Studies with the Cairo community. From February to April of this past year for example, she presented an exhibition at the Cairo Museum featuring artifacts from her archeological digs in Fayyoum.

For Römer, these excursions into Coptic studies and papyrology offer the opportunity to learn more about Egypt’s past in order to better understand the country’s present. “In my view, no matter if people are Muslims or Christians, this is a very important period in the history of Egypt, where a lot of things come together. When we look at what religions from the past have left behind, we can try to understand how much we can also learn about our own religion today.”