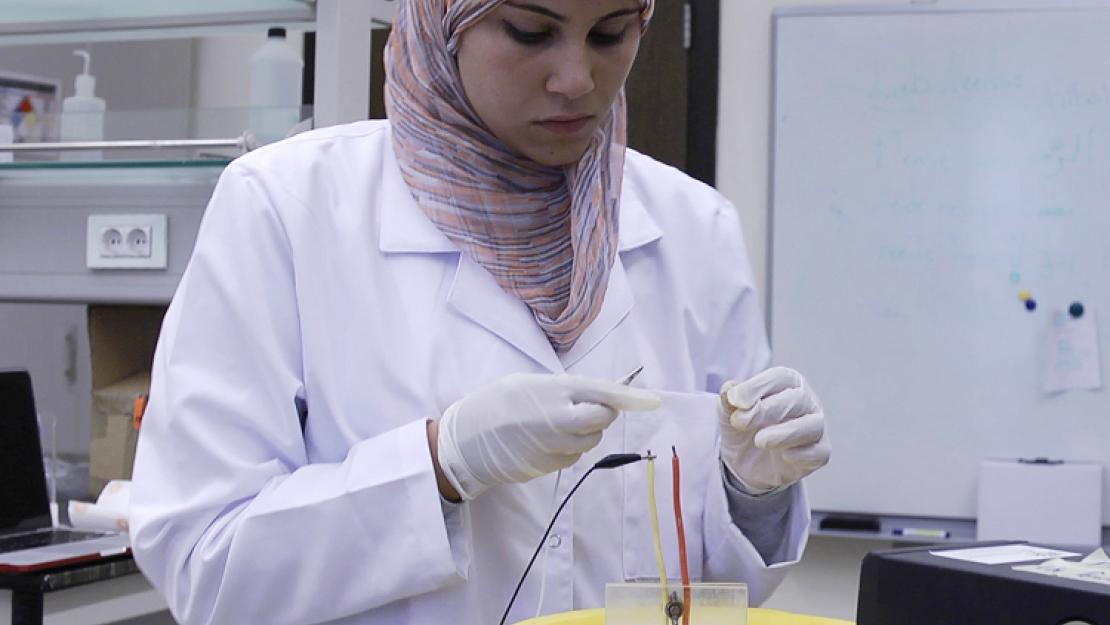 Working as part of an AUC research team, chemistry junior Dina Eissa is using nanotechnology in the form of zinc oxide nanorods to produce a clean, sustainable and cheap method of harnessing solar energy as a way of confronting the looming energy crisis in Egypt and the global community.

“People think that renewable energy is needed because fossil fuels are running out, but this is not the biggest problem,” explained Eissa, who is pursuing a minor in physics and philosophy. “The real problem is that if our energy production increases to meet the rapid growth in the world’s population, this would mean doubling or tripling the pollution. Right now, we are consuming about 12 terawatts of energy worldwide, and by 2050, we will need at least 28 terawatts because the global population is expected to increase by 1 billion.”

Together with graduate student Noha Samir and Nageh Allam, professor of physics, Eissa published a paper titled “Self-assembled Growth of Vertically Aligned ZnOnanorods for Light Sensing Applications,” which details the team’s discovery of zinc oxide nanorods that harvest solar energy better than other rods, and at a lower cost. “Zinc oxide is not the cheapest, but it is fairly cheap, and no one has produced good rods before using anodization” Eissa noted. “There are many ways to produce nanorods, but this method is less expensive.”

Using nanotechnology in harvesting solar energy makes the process more efficient and increases the amount of energy that can be produced. “One problem in creating solar energy is that electrons can get lost in the process and, hence, cannot be used to produce electricity,” Eissa said. “With nanorods, however, the situation is different. Nanorods are on the surface of zinc oxide, so when the sun hits this surface, it excites the electrons, losing fewer in the process than with bulk materials. It is more efficient.”

The rods can harvest solar energy for a number of purposes, including the production of clean energy. “The electrons travel between the nanorods and produce electricity, which can be used in different ways, including water splitting, or the breaking down of hydrogen and oxygen,” said Eissa, adding, “Hydrogen is a clean fuel that has more energy than fossil fuels, but to perform water splitting, electricity is needed, which, in turn, means the burning of fuel and an increase in pollution. By using the sun’s energy, clean fuel and electricity will be produced, and hydrogen and oxygen will be broken down.”

Eissa is currently working on a similar project with other undergraduate students to produce electricity from solar energy. “I want to continue research in environmental issues and to explore theoretical concepts that might help us understand more about processes such as anodization,” she noted. “We test different theories in the lab, and it is through these experiments that we find out what works and what doesn’t. I am really fascinated by research, especially nanotechnology, which is a new and promising field.”