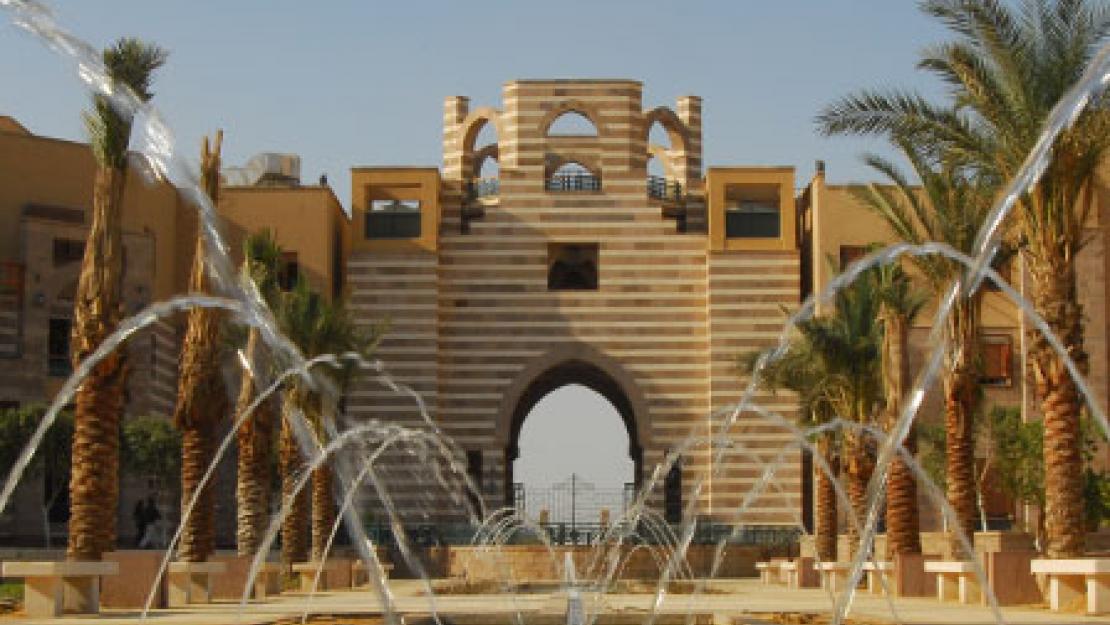 There is a limited supply of water to New Cairo, a situation exacerbated during hot months as water needs increase, explained Marc Rauch, director of sustainability. “Right now, there is only one water line serving New Cairo, meaning that water must be pumped from the Ismailia Canal 54 kilometers away,” said Rauch. “During the hot months, when the demand for water increases dramatically for purposes such as air conditioning and irrigation of landscaping, there is simply not enough water for New Cairo. By the time the water reaches AUC, located in the geographic center of New Cairo, there may be little or no water pressure. There have been times during the past year when no water at all was available to AUC from the municipal supply during the day, and relatively little at night.”

Disruption of the water supply can lead to a campus shutdown in hot weather because the air conditioning system cannot operate without water. “About 20 percent of all water used on campus is used for the AC system,” said Rauch. “Because water shortages tend to happen in hot months, when we need AC, the campus shuts down.”

The Egyptian government is building another water main to bring water from the Nile to New Cairo through Maadi, but this main has been under construction for some time and it is not clear when it will be finished. Faced with the prospect of continued water shortages, Brian MacDougall, executive vice president for administration and finance; Hesham Abdel-Aziz, associate vice president for facilities and operations; and Rauch convened a task force comprising members of the facilities office, administrators and faculty experts to develop a strategy. The task force met in December 2012 and January 2013, and produced a series of recommendations for both increasing the supply of water available to the campus and managing both short-term and long-term demand.

“We started by gathering data on how much water we use and what we use it for,” Rauch explained. “We have water meters all over campus, so we began reading them systematically and analyzing the data. Based on a recommendation from Professor Emad Imam, a water specialist in the School of Sciences and Engineering, who told us to study the ‘worst day of the worst month’ to determine our peak demand for water, we looked for the worst week of the worst month, then developed a strategy for meeting that demand for a full work week, even if there was a complete failure of the municipal water supply. If we can meet the demand during the worst week of the worst month, then we should be able to survive a shortage during any other week as well.”

It turned out that in 2012, the “worst week of the worst month,” or the time when campus water use was at its peak, was in early October 2012. “That makes sense,” Rauch explained, “because there is a high level of activity on campus in early October, and it is still hot.”

The task force developed a multi-part plan focusing on both supply and demand. On the supply side, they determined that building another water storage tank with a 2,000-cubic-meter capacity would increase the existing water storage capacity at the New Cairo campus by about 57 percent. This, combined with the likelihood that at least some water could be resupplied at night, would enable the campus to operate for five consecutive working days in the event of a water shortage.

The new water tank was completed over the summer and is full. Thanks to the efforts of Osama Zayed, AUC’s director of construction services, and his colleagues, the building process, which would normally take six to nine months, was completed in three months.

From the demand side, the task force made recommendations for both short-term solutions and long-term conservation strategies. First, the task force put together a prioritized list of short-term measures to be put into effect as soon as the municipal water supply begins to run out. Rauch explained, “There are essential water needs you can’t touch and non-essential needs that can be eliminated during a water shortage. Air conditioning falls in between. It is a necessity so it has to keep running, but you can cut it back on a short-term basis to save water.”

The task force is also implementing a number of long-term strategies for reducing water use on campus. These include changing flush valves in bathrooms, managing the air conditioning system more efficiently and using treated water to irrigate campus landscaping. “A key strategy for reducing water use in buildings was recommended by Hesham Abdel-Aziz, who suggested changing the flush valves on toilets and urinals throughout the campus,” said Rauch. “The old flush valves would get stuck and keep flushing and flushing, wasting copious amounts of water. On Abdel-Aziz’s recommendation, we decided to replace all of them with new, higher quality flush valves, so now, in order to keep flushing a toilet or urinal, you have to keep holding the flush mechanism down. The moment you take your hand off, it stops.”

The flush valve replacement program has resulted in impressive reductions in water use. In the Administration Building, which was used as a test case, water consumption dropped by 51 percent in the six months after new flush valves were installed. In the School of Sciences and Engineering (SSE), which before the flush valves were replaced was the single biggest user of water on campus, water consumption dropped by 49 percent in the four months after the change in flush valves. “We thought SSE used so much water because of all the science and engineering labs, but water usage at SSE was that high simply because there were so many bathrooms,” noted Rauch.

The installation of new flush valves, totaling 2,000 new valves in all, was completed last week. Similar to the Administration Building and SSE, other buildings fitted with the new flushing mechanisms have shown striking reductions in water use.

He added, “Over the past two years, we have been managing air conditioning much more efficiently and achieving large savings in both energy and water.” An example of better air-conditioning management is not cooling space unless it is actually being used. Auditoriums, rehearsal spaces and large lecture halls are spaces that consume large amounts of air conditioning, but are not actually being used much of the time. We no longer cool these spaces unless they are in active use.”

An obvious advantage of using treated wastewater instead of domestic water for irrigation is that it drastically reduces the demand for domestic water and takes pressure off AUC’s domestic water supply. Another advantage is that there are now two different sources of water that can be used for irrigation in case one or the other temporarily goes dry. “There is only so long the landscaping can wait for water during the really hot weather,” Rauch pointed out. “Now there is less risk that our beautiful campus garden will shrivel up and die.”