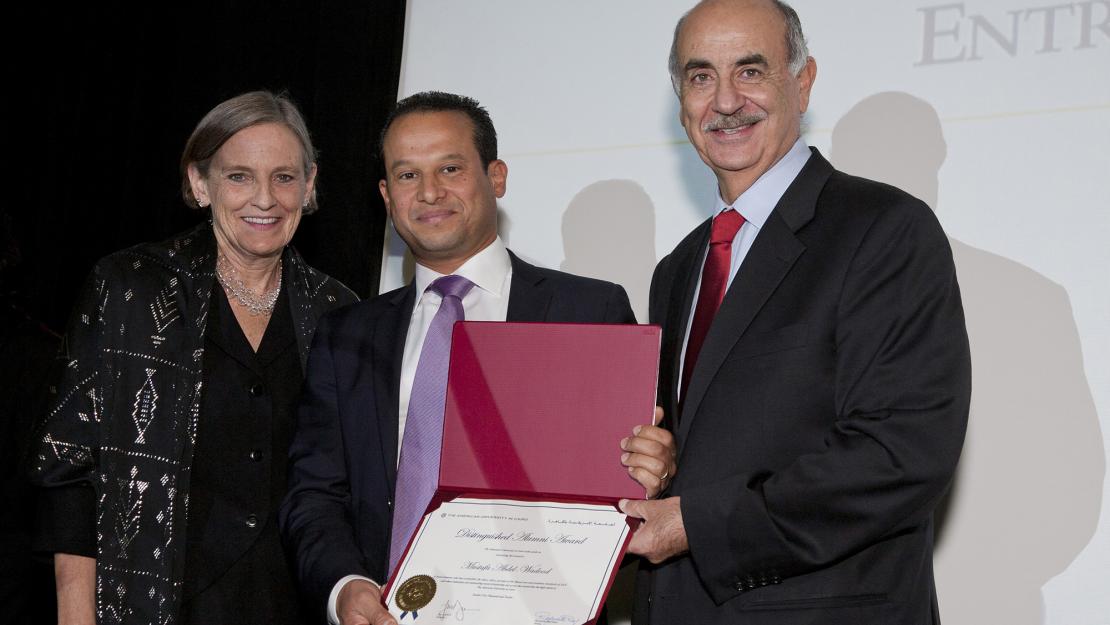 As the world sets sights on post-revolution Egypt as an emerging power in the Arab world, economic resurgence becomes a key target for Egyptians across the globe. Building on this premise, AUC hosted its second annual Benefit Dinner under the theme of Innovation, Entrepreneurship and the New Egypt. The event, which was held on October 18 at the JW Marriott Essex House in New York, honored Perihan Abou-Zeid ’09, Mustafa Abdel-Wadood ’91 and John F.W. Rogers for their innovative ideas, entrepreneurial spirit and commitment to advancing Egypt. More than $350,000 were raised at the event. The net proceeds will go toward scholarships.

Close to 200 guests attended the benefit dinner, including trustees, senior administrators, staff members, alumni and friends of AUC. During the event, Abou-Zeid, co-founder and communications director of Qabila Media Productions, and Abdel-Wadood, chief executive officer of Abraaj Capital Limited, were presented with AUC’s Distinguished Alumni Award. The third award was given to the Goldman Sachs 10,000 Women program and was accepted on behalf of Rogers, executive vice president of Goldman Sachs, who gave up his award to Sayeda el Kot, a graduate of the program and manager of Black Horse for Services.

“This benefit dinner in New York is designed both to provide a North American showcase for the remarkable work being done at AUC and to raise funds for scholarships for our students,” said AUC President Lisa Anderson. “The evening provided a wonderful opportunity to highlight programs that emphasize imagination and initiative in the business world, through our recognition of two of our distinguished young alumni as well as the School of Business's partnership with Goldman Sachs in their 10,000 Women Entrepreneurship program. We deeply appreciate the contributions of those who supported the dinner, all of whom are helping to ensure that the AUC experience is accessible to the brightest minds in Egypt and the region through scholarships.”

A finance guru, Abdel-Wadood is responsible for overseeing Abraaj Capital investments and teams spanning across several industries and regions, including the Middle East, Africa, Asia and Latin America. With 20 years of experience in the fields of investment management, corporate finance and business development throughout emerging markets, particularly in the Middle East, he was selected by the World Economic Forum as one of the 100 Global Leaders for Tomorrow and as a Young Global Leader in 2007. He also established the Mustafa Abdel-Wadood Public School Scholarship at AUC.

Abou-Zeid, whose profile includes occupying impressive positions at Google, the Canadian Embassy and TE Data, said her innovative inclinations became evident during her years of study at AUC. “I always do whatever I love and makes me comfortable,” Abou-Zeid told the attendees. “It is something I learned during my early University years at AUC, where they allowed me to change my major three times, and again I was looking for what I would love to do, [and this is] how my friends and I started Qabila Media Productions. We agreed to share the same vision, and put aside our differences and work collectively to achieve our dream. This is how we do it; it’s not a cliché for us [to] change the world every day a bit by bit, and we hope that we inspire others to do the same.”

Echoing the same sentiment, el Kot said that the Goldman Sachs 10,000 Women program equipped her with skills that would benefit her for life. “It is true; the last year has brought many challenges, but it has also opened doors,” she noted. “I lost a number of clients after the revolution. But with my new skills, I learned to be nimble and have the confidence to not only survive, but expand. I learned in this program that everyone needs a mission and a vision, and that one’s dream should not have a ceiling. That includes me and my employees, and I have worked to instill pride and confidence in our work through simple but important steps.”

Rogers, whose career at Goldman Sachs spans over 18 years, oversees executive administration and is responsible for the firm’s corporate affairs functions, including public, investor and government relations, as well as corporate engagement. He is a member of the Management Committee and the Client and Business Standards Committee. Rogers is also chair of the Goldman Sachs Foundation and Goldman Sachs Gives, and was named managing director in 1997 and partner in 2000.

The Catalyst for Change benefit dinner is an annual event that helps connect AUCians in the United States with the extraordinary achievements not only of alumni, but of the University itself. AUC would like to thank all donors who made the Benefit Dinner a success.