Behind the Scenes: The Making of Exhibitions 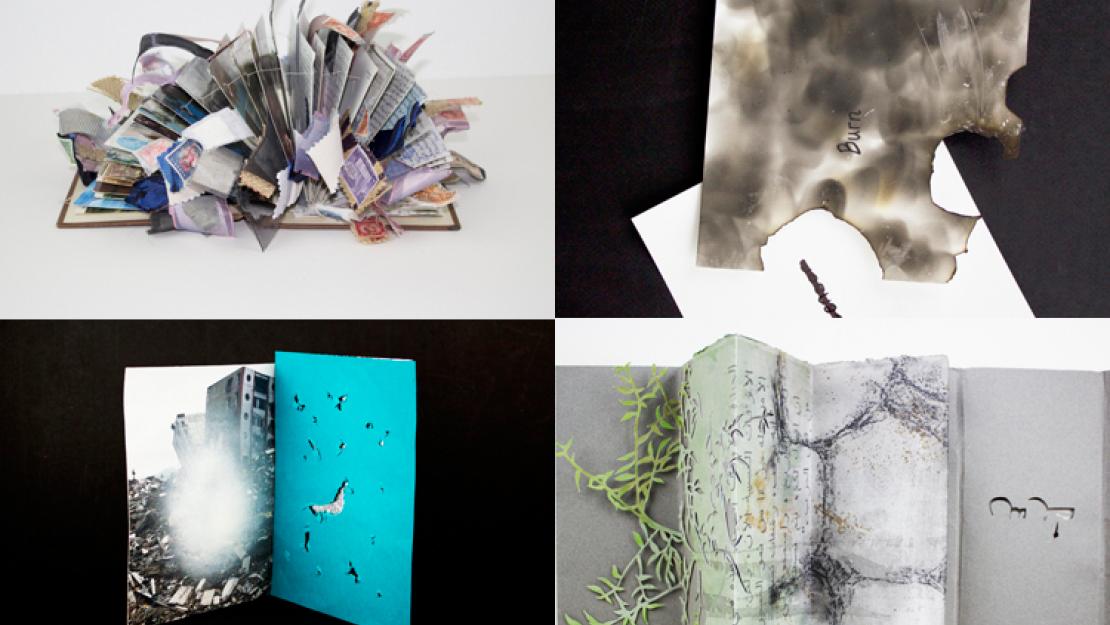 With the ever-changing rotation of exhibits in the Rare Books and Special Collections Library (RBSCL), few may stop to wonder how these exhibits are conceived of and executed.

“Each exhibit requires weeks and months of preparation in advance, and a great deal of time and creativity goes into it,” said Conchita Tschirgi, curator of the Regional Architecture Collection at the RBSCL.

One such exhibition is the Al-Mutanabbi Street Starts Here, which is on display until August 30. The exhibition features 54 artistic and unconventional books that have been touring libraries across the world. The book tour is dedicated to the memory of Baghdad’s Al-Mutanabbi Street, the historic hub of the city’s booksellers and makers, which was tragically destroyed in a violent explosion in 2007. Visitors to the exhibition enter the hall through a large archway composed entirely of books, to recreate the sense of entering an old street. With display cases on either side of the center aisle symbolizing the many book stalls that used to line the actual Al-Mutanabbi Street, the layout of the exhibit makes for a tantalizing visual display. “When we started materializing ideas for how to set up the Al-Mutannabi exhibit, we focused on the three dimensional element,” said Tschirgi. “We wanted something attractive that would also give a sense of the place.” To add to the impact, floating books hang down from the ceiling, while a statue of Al-Mutannabi himself –– a famous Iraqi poet for which the street was named –– takes center stage. Figures depicting a minaret and pyramid, also composed of books, fill up the corners of the hall, and the walls are lined with a photographic timeline of the history of writing and letters. “The basic concept was to try and recreate the look and feel of a street, with book stalls that had arches along the sides,” said Philip Croom, associate dean of the RBSCL. “As we did more and more research, things began to get more creative.” This creativity led to the floating books effect, one of the most distinctive aspects of the exhibit. “The floating books artistically capture the idea of an explosive going off in a bookshop and the books all flying into the air,” Croom noted. “Our initial idea was to make the exhibition hall look as much like Al-Mutannabi Street as possible, but it became much more symbolic.” In order to achieve the flying book effect, Tschirgi and her team of five students made photocopies of book jackets from the library’s collection and carefully applied them to cardboard. “To use real books would have been too heavy and would have complicated things, so we had to find a solution in order to create this particular display,” Croom explained. One of the students working alongside Tschirgi was also responsible for the creation of the Al-Mutannabi book statue, while the rest of the team focused on building the minaret and pyramid, which emulate the Great Pyramid of Egypt and the minaret of the Great Mosque of Samarra in Iraq. “Al-Mutanabbi Street Starts Here was one of our most challenging and creative exhibitions,” said Mohamed Abu Bakr, manager of conservation and preservation curator at the RBSCL, who, along with Croom and Tschirgi, is one of the primary members of the team that conceives of, plans and executes all of the library’s exhibits. “We began preparing on a small scale two months before the exhibition, and the most intensive work was done 10 days prior to the opening, when we were working all day until late into the night.” The aim of these creative ideas was to attract as many visitors as possible, particularly students. “We wanted students to walk by, stop and say, ‘Wow, what are these books in here?’” said Tschirgi, affirming that student feedback about the exhibition was positive and encouraging. “A lot of students have come to the exhibition during their individual time and even contacted us to ask if they could bring their friends from outside the University.” Highlighting the time and effort that goes into every exhibition, Croom noted, “For every exhibit or event that we do, we use the minimum resources to have a maximum effect, and everyone who works in the library becomes involved. It’s an incredible team effort each time, as well as a learning process for us.”