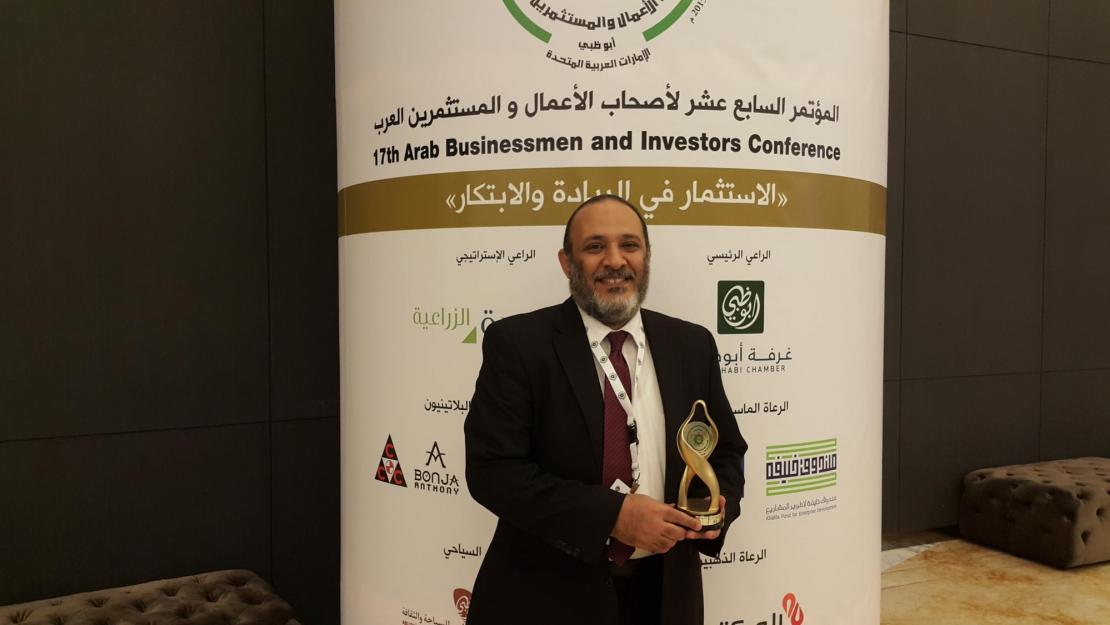 With an estimated 15 to 20 percent of the Egyptian population affected by hepatitis C, the infection rate is the highest in the world. Hepatitis C is sometimes coined the silent disease because infected people may carry the virus for as long as 20 years before facing liver failure. Because infected people do not show profound symptoms, detection is the first step.

Through D-Kimia, the first University spinoff in Egypt founded in 2013 by Chemistry Professor Hassan Azzazy, a fully automated, robotic machine for hepatitis C diagnosis has been developed, earning Azzazy first place in the industry section of the Arab Innovation and Entrepreneurship Award competition, organized by the Arab Science and Technology Foundation. The award was presented by the United Arab Emirates minister of commerce at the 17th Arab Businessmen and Investors Conference in Abu Dhabi.

Azzazy received the award as an acknowledgement of his commitment to responsible business and building a lucrative company in a difficult economic climate. “This award is a major accomplishment for Egyptian companies and for AUC,” explained Azzazy. “It is also a major achievement that we have survived for two years in these harsh economic conditions in Egypt with a weak ecosystem for entrepreneurship.”

Azzazy and D-Kimia garnered attention at the conference for a fully automated, robotic machine that streamlines the process of testing for hepatitis C. The robotic machine was funded by a grant from the Academy of Research Science and Technology through a joint proposal of AUC and D-Kimia. “Without this fund, we could not have developed the machine,” said Azzazy.

Highlighting the importance of cheap, reliable diagnostics, Azzazy explained, “Current hepatitis C testing is complicated and expensive. Many people don’t even follow through with the second round of testing,” he said, adding that access to an affordable and portable means of testing will reach an exponentially larger portion of the population. “Our machine automatically performs all the functions that any lab might need to test the patient’s blood. The machine is controlled by a computer, so no human hands are required to handle the highly infectious materials and, at the end of the process, the machine can self-sterilize.”

The competition selected 30 companies out of 120 to attend the conference in Dubai. They were interviewed by a panel of judges, made a four-minute presentation and each company had a booth. Azzazy explained that previous competitions included startups that were still in the idea phase. This year, the foundation sought established companies that would be connected with investors in the Emirates and other Arab countries to help them move to the next level. The criteria was that they are fully fledged companies with an innovative idea that also has a product that positively impacts society.

“At D-Kimia, we are using biotechnology and nanotechnology to address a medical problem with robotics. Nobody else was doing this at the competition,” stated Azzazy. “We were innovative in using gold nanoparticles to detect the virus.”

Azzazy explained thatD-Kimia’s innovative diagnostic solution is two-fold. “First, there is the chemical formulation, which contains a short DNA sequence, gold nanoparticles and other agents that can detect the presence of the virus in the patient's blood,” he noted. “Then, the robotic element is this machine that can extract the hepatitis C virus RNA from blood. So we put a patient’s blood sample into this machine, and at the other end, we get the genomic material of the virus. We add it to the chemical solution to get the final answer.”

He also pointed out that D-Kimia’s innovative technology is specifically designed to fill a larger need in society. “The applications for our machine have potential to make a worldwide impact in the detection of infectious diseases, which are the most dangerous kinds of diseases and pose a danger to all of humanity.”

D-Kimia is AUC’s first spinoff company. Spinoffs are commonplace at top-tier research institutions in the United States and have now been embraced by AUC. Azzazy explained that the spinoff model begins with technology, innovation and patents developed by faculty members using the University’s resources, and are then given to a company to develop into a fully formed product. It’s a mutually beneficial partnership between faculty members and the University, and is an indicator that important research is being manifested into a product that contributes to society. “This is actually one of the most stringent criteria by which you evaluate a university,” declared Azzazy. “With AUC, we have to ask: Where is the output? What is our contribution to alleviate the pains of society? Where is our contribution to the economy and to unemployment? The success of spinoff companies is a way to assess those questions.”

Since D-Kimia is AUC’s first venture into spinoff companies, there were no established guidelines, and Azzazy recalled that many were hesitant. He noted, however, the full support he received from AUC President Lisa Anderson. “She took a risk when there was no precedent. She was entrepreneurial herself in really believing in the company,” he said.

D-Kimia works to provide diagnostic solutions that are affordable, simple and require minimal infrastructure. “We are focusing on the hepatitis C virus because Egypt is the country with the highest infection rate in the world,” said Azzazy. “I believe that diagnosis of the disease is the cornerstone in managing and preventing the spread of the virus. If a person knows he is positive or negative, he will act accordingly so as to not put others at risk.”

Azzazy hopes that the award will result in Emirates investors joining the company and moving it to the next phase. “We would like to keep expanding the company, looking at additional products and possibly merging and opening a second branch.  That will expose us to more of the market,” said Azzazy, adding that D-Kimia also recently won the Best Project Award during the Cairo Innovates 2015 Exhibition in November 2015. The award was presented by the National Academy for Scientific Research and Technology.

Expanding D-Kimia also means expanding the availability of its diagnostic services. “Having a low-cost, affordable test that can be conducted in a remote location reaches deeper into the population to the people who need it the most. Only then can you really have a positive effect and contribute to solving problems in society.”