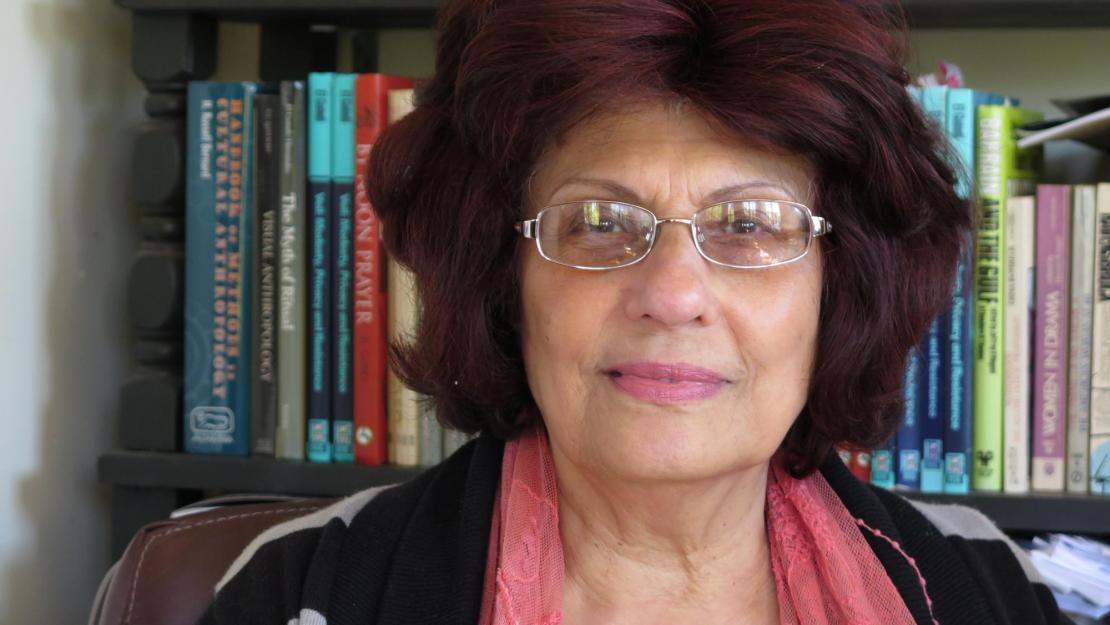 Fadwa El Guindi is the first speaker of the Distinguished Alumni Lecture Series.

The new Distinguished Alumni Lecture Series will kick off today with its first alumni speaker, Fadwa El Guindi ’60, award-winning professor of anthropology, international lecturer and founder of El Nil Research, who will speak on “My Passage from AUC to Anthropology Through Nubia.” The lecture will be held on Monday, April 24 at 6 pm in Watson Hall, AUC New Cairo.

The Distinguished Alumni Lecture Series offers an opportunity for students to hear about the diverse paths taken by AUC graduates of different fields.

“It is important that we strengthen the link between alumni and students. Students have a chance to listen to eminent professors and alumni reflect on their experiences,” said Raymonda Raif Abdel Nour, executive director of alumni engagement and the AUC Annual Fund. “These speakers were once in students’ shoes, and this demonstrates what our AUC graduates are capable of achieving.”

El Guindi’s lecture will trace her anthropological career, starting with her formative years and culminating in her becoming a distinguished scholar in the field of anthropology.

After graduating from AUC with a Bachelor of Arts in political science (cum laude), Fadwa El Guindi ’60 embarked on a long and distinguished career in the field of anthropology. An acclaimed author, documentary filmmaker, anthropologist and scholar with a PhD in anthropology from the University of Texas at Austin, El Guindi has produced international, award-winning visual ethnographies on Arab and Muslim culture, including El Sebou’: Egyptian Birth Ritual, El Moulid: Egyptian Religious Festival and Ghurbal. These films were produced by the U.S.-based El Nil Research, a nonprofit ethnographic laboratory and visual research center founded by El Guindi. As an anthropologist, her research involves fieldwork with Arab, Nubian and Zapotec cultures and Arab-Americans.

A prolific author, El Guindi has more than 80 publications in English, Italian, French, Russian, Arabic, German and Spanish, and serves on the editorial boards of prominent scholarly journals. Her book, Veil: Modesty, Privacy and Resistance, has become an anthropological classic and has been translated into several languages. El Guindi is also author of The Myth of Ritual: A Native’s Ethnography of Zapotec Life Crisis Rituals, where she adopts the innovative methodology of native ethnography. Other groundbreaking anthropological books she has authored include Visual Anthropology: Essential Method and Theory and By Noon Prayer: The Rhythm of Islam.

Past president of the Society for Visual Anthropology, El Guindi previously served as distinguished professor of anthropology and head of the Department of Social Sciences at Qatar University. She was also a professor at the University of California, Los Angeles and taught anthropology at the University of Southern California; University of California, Santa Barbara; and Georgetown University. Her expertise on the Middle East brought her to the Clinton White House, and she frequently gave lectures to diplomats assigned to the Middle East at the Foreign Service Institute of the U.S. Department of State. El Guindi currently lectures internationally and has recently been elected as a fellow of the World Academy of Art & Science.