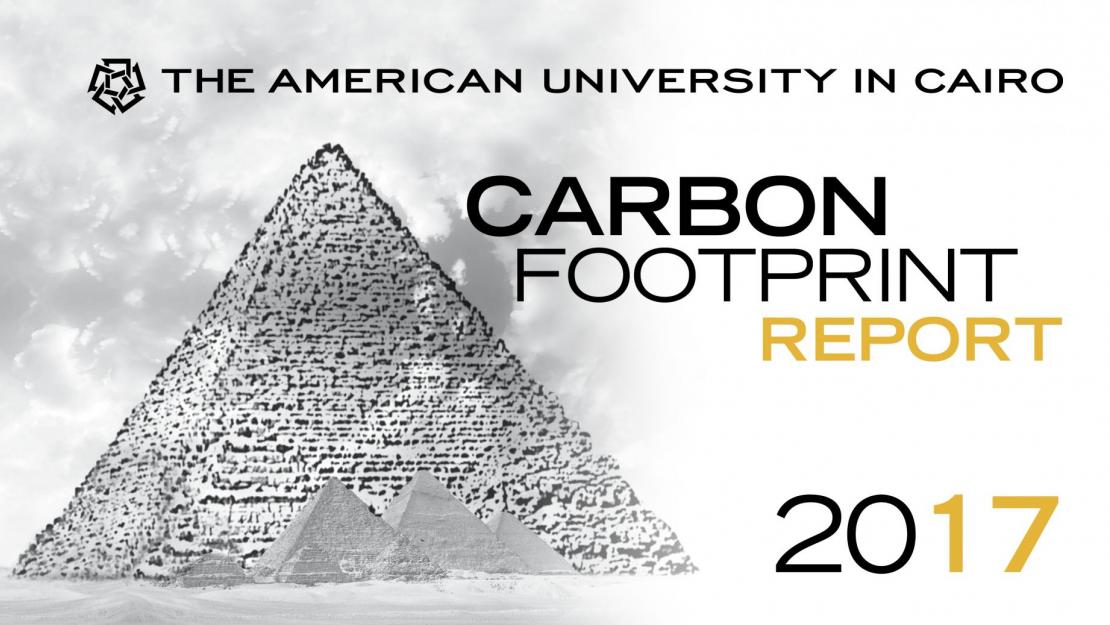 As stated in AUC’s newly released 2017 Carbon Footprint Report, atmospheric concentrations of greenhouse gases are currently the highest they have been in 800,000 years and are the primary contributors to global warming, glacial melt and sea level rise. While Egypt’s annual emissions have historically only made up about 0.6 percent of the total global greenhouse gases, the country is recognized as one of the most vulnerable to climate change, the report says.

In hopes of measuring and then reducing its contribution to global greenhouse gases, AUC's Office of Sustainability has officially launched the fourth Carbon Footprint Report, an effort that was led by Khaled Tarabieh, assistant professor of sustainable design in the Department of Architecture at the School of Sciences and Engineering, Yasmin Mansour, AUC’s sustainability officer, and Suzi Kondic, presidential intern in the Office of Sustainability.

"This report marks five years of data collection needed to assess the University’s carbon footprint, which is strategic for the operation and sustainability of the campus,” said Tarabieh. “The result of collaboration between different departments and schools, the report is data-intensive, requires a high level of quality and is vital for the University’s mission of achieving a greener, healthier and more resource-efficient campus. This report coincides with other institutions worldwide that are actively working toward achieving similar goals, and it provides an example that can be disseminated to other universities in Egypt and the region.”

As Tarabieh noted, the Carbon Footprint Report was produced with three goals in mind: developing data and expertise that can help reduce AUC’s greenhouse gas emissions, bolstering the University’s finances by reducing demand for fossil fuels and creating a model that can be adopted by other institutions in the region.

More than 90 percent of AUC’s total emissions can be attributed to heating, ventilation and air conditioning; hot water; transportation; and electricity.

Between the 2011-2012 academic year and the 2015-2016 academic year, AUC saw its carbon footprint increase by approximately 13 percent. Specifically, during that time, emissions were reduced in the categories of heating, ventilation and air conditioning; electricity; paper; water; and solid waste disposal. On the other hand, emissions increased significantly in the categories of transportation and refrigerants.

In several categories, AUC has seen a dramatic and noteworthy reduction of emissions. For example, paper and solid waste emissions reduced by about 25 percent. Moreover, supplying water to AUC now accounts for only 1.3 percent of the University’s carbon footprint, which is due in large part to substituting fresh water with treated wastewater in campus landscape irrigation.

Although there have been significant institutional changes toward reducing AUC's greenhouse gas emissions, there was also a dramatic increase in certain emission categories, such as transportation. As the report emphasizes, this increase signifies a need for a large-scale behavioral change in which members of the AUC community rely more on shared rather than private transport.

Moving forward, the report highlights 39 different ways to reduce the University’s carbon footprint, in addition to detailing a scenario to achieve lower emissions by the year 2030. Campus-wide, the report recommends distributing weekly sustainability awareness tips by email and phone messaging, holding an annual competition to reward the lowest-emitting campus groups and forming a sustainability student team to patrol campus emissions. Moreover, the report includes many recommendations for the most significant contributors to AUC’s carbon footprint. These include, but are not limited to: