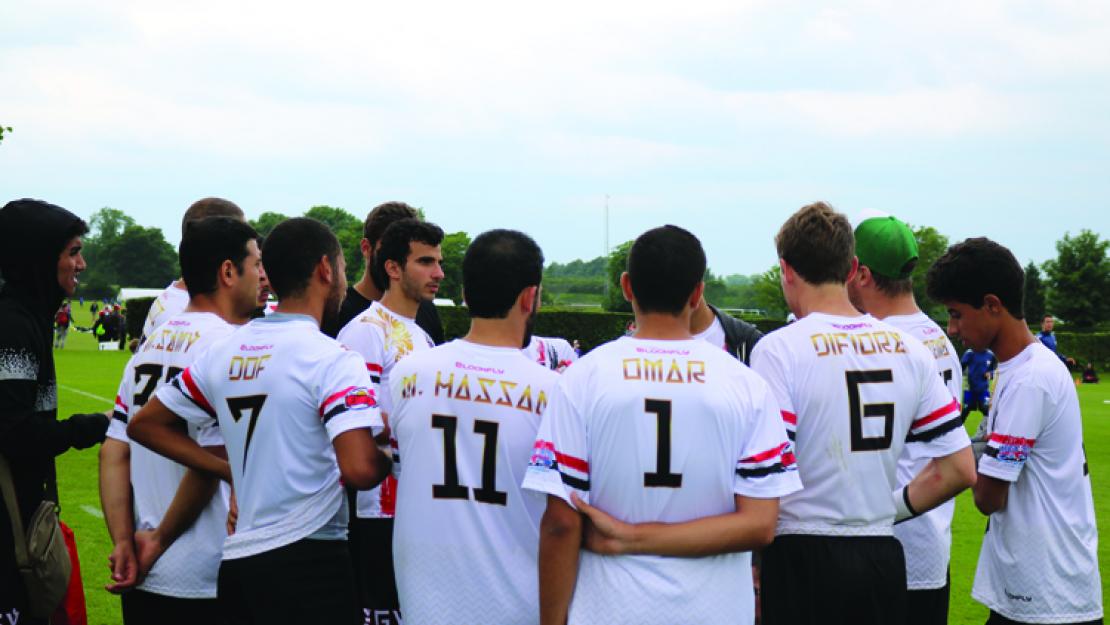 At this year’s 2016 World Ultimate and Guts Championships (WUGC) held in London, England, Egypt’s national frisbee team ranked 30th out of 31 teams that played in the men’s division. Of the 16 players that represented Egypt at the event, eight are AUC students and one is an AUC alumnus.

With more than 3,000 athletes from more than 120 teams hailing from 39 different countries, Egypt was one of three Arab and African countries to compete in this global event. It is also the only new member of the World Flying Disc Federation (having been officially recognized this past January) to appear on the global stage.

Ibrahim El-Sayed, captain of the national frisbee team and founder of the AUC frisbee team, explained how he originally became impassioned with ultimate frisbee for its high intensity and athletically demanding nature. “After graduating from high school in the United States, I was invited to join the local ultimate frisbee team,” he said. “I was immediately hooked; it is a high-intensity sport that demands athleticism and skill, but never compromises on sportsmanship and the spirit of the game, holding players accountable to lead games. This self-officiated model holds true even at the highest level of play, including the WUGC.”

For Yousef Abouzeid, a sophomore majoring in business administration and vice captain of the AUC frisbee team, the positive attitude surrounding the sport made it very hard to quit. “I always wanted to play, improve and work hard,” he said. “As AUC students, we’re very lucky to have access to sport facilities all year around, something other university teams in Egypt had trouble accessing.”

AUC’s frisbee team also competed in the first annual Egyptian Ultimate National Championships, earning first place in the competition. “AUC’s win is a strong testament of how the University team has strongly developed to be the best in Egypt,” said El-Sayed. “Also at the WUGC competition, AUC players made up the majority of the national team.”

Since the AUC frisbee team was founded in 2013, it has competed in tournaments every semester with local schools such as Cairo American College and International School of Choueifat, in addition to hosting tournaments at AUC. The players have also participated in international tournaments including the Skyline Cup in Frankfurt Germany in June 2015 and the 26th Annual Cooler Classic held in Milwaukee, Wisconsin in August 2014.

While ultimate frisbee is a developing sport in Egypt, El-Sayed’s ultimate goal is to instill interest in other people to take part in the game. “AUC has magnified my interest in the sport far beyond than what I expected,” he said. “I’ve had the opportunity to be among the few players selected to play in the most prestigious ultimate frisbee tournament in the world, a sport players around the world train tirelessly for. This would not have been possible without the founding and continuation of the AUC frisbee team.“