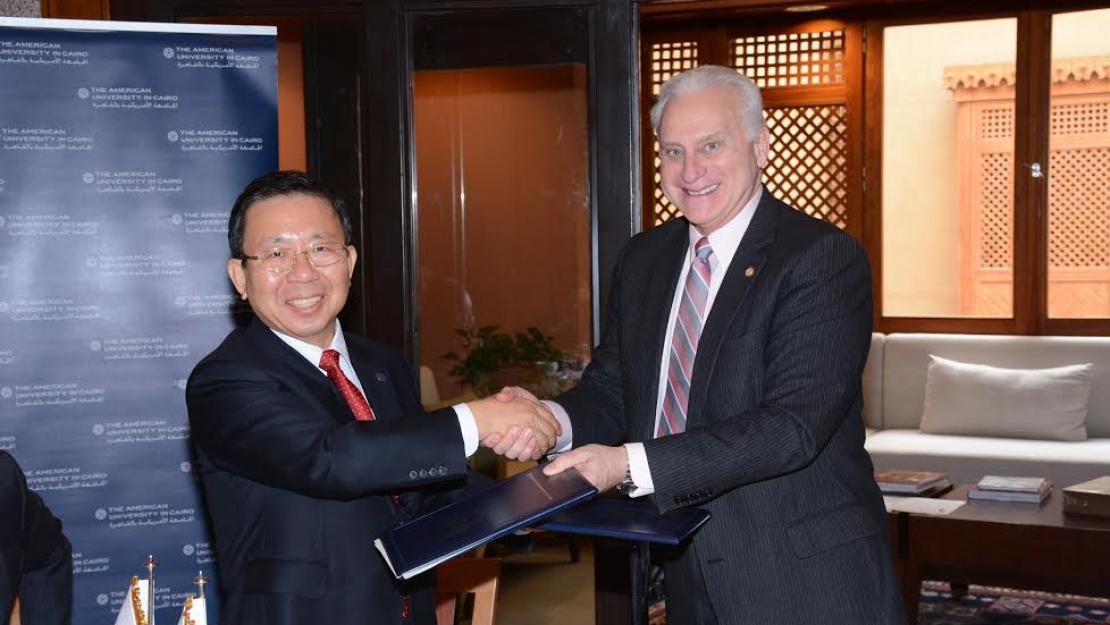 Sharing common goals and visions in global education and innovation, AUC and University of Seoul in South Korea sign a partnership agreement, mutually expanding their group of partner universities on an international level.

President Francis Ricciardone welcomed University of Seoul's President Yun-hi Won, accompanying senior staff and researchers, highlighting the commonalities between both institutions, with the University of Seoul celebrating its 100th anniversary this year, just one year before AUC celebrates its own centennial. “University of Seoul is a global university and has an active and advanced international partners program,” Ricciardone said. “What we’re doing today fits right in, precisely, with who we are and what we’re trying to do.”

Echoing Ricciardone’s sentiments, Won asserted the need for global expansion through learning, with students at the center of that objective. “In this globalized and interconnected world, it’s important to give such opportunities to our students, to host international students and allow them to experience other cultures,” Won said. “This cooperation will enhance both universities and give them a chance to develop.”

The University of Seoul is the only public university in Korea, which has eight undergraduate colleges and nine graduate schools, and is chiefly funded by the Seoul City Government. Other external funds they receive are mainly for research. Both universities, Won mentioned, are situated in capital cities, and face similar obstacles as up-and-coming centers. “We have been recently focusing on issues of transportation, public health and the environment," said Won. "I hope we can share our experiences and find solutions together.”

Aside from being in major metropolitan areas, both universities have gone through major economic and political changes at different time periods. They have used their campuses to their advantage, offering studies and promoting research in relation to industrial and social development.

Jean Song, senior program coordinator of the University of Seoul (UOS), introduced one of the institution's strongest schools and areas. “UOS specializes in urban sciences, particularly through the graduate school, which was established in 2014 by the Ministry of Land, Infrastructure and Transport,” she said. “After the Korean war in the 1950s, the city of Seoul changed dramatically. Many of the students who come here for a master’s program or other specialized studies in urban studies get to have the firsthand experience and research of seeing how the city developed and continues to [develop]."

On the other hand, AUC’s Associate Provost for Strategic Enrollment Management Ahmed Tolba, highlighted the consistent prestigious accreditations earned by various schools and programs, such as the Core Curriculum, Center for Learning and Teaching, Career Center and Arabic language centers. He also stressed that the location of the campus is one of its strengths, offering a one-of-a-king experience of witnessing development. “We are lucky to have both our campuses in Cairo, and one of them being in Tahrir, where AUC witnessed the 2011 revolution,” he stated. “Our curriculum here loves having Cairo as an extension of the classroom, where all students students can study the city’s social and cultural changes in many disciplines.”

Alaa Eldin Adris, associate provost for research, innovation and creativity, supported Tolba’s point, drawing on AUC’s multidisciplinary approach and adding how partnerships can augment that aspect. “We definitely look into promoting international partnerships and work on how both institutions complement each other,” he said. “Here, we have two types of areas: aligned and complementary. This will open doors for potential cooperation with interdisciplinary projects where we can benefit from the others’ areas of excellence and strength.”

Tolba also noted AUC’s keenness on strengthening its international programs in recent years. “After 2011, the number of incoming international students saw a decrease, but recently we have been pushing toward changing that,” he asserted. “In Fall 2017, we saw a great increase that reached 5 percent of our student body, and our goal is to reach 10 to 15 percent in the coming years.”

Both universities believe in the importance of globalizing education. UOS has over 260 partner universities in 49 countries and provides exchange opportunities, scholarships for international students and summer courses in Korean. The university also offers incoming students from abroad the chance to teach Korean students their mother tongue.