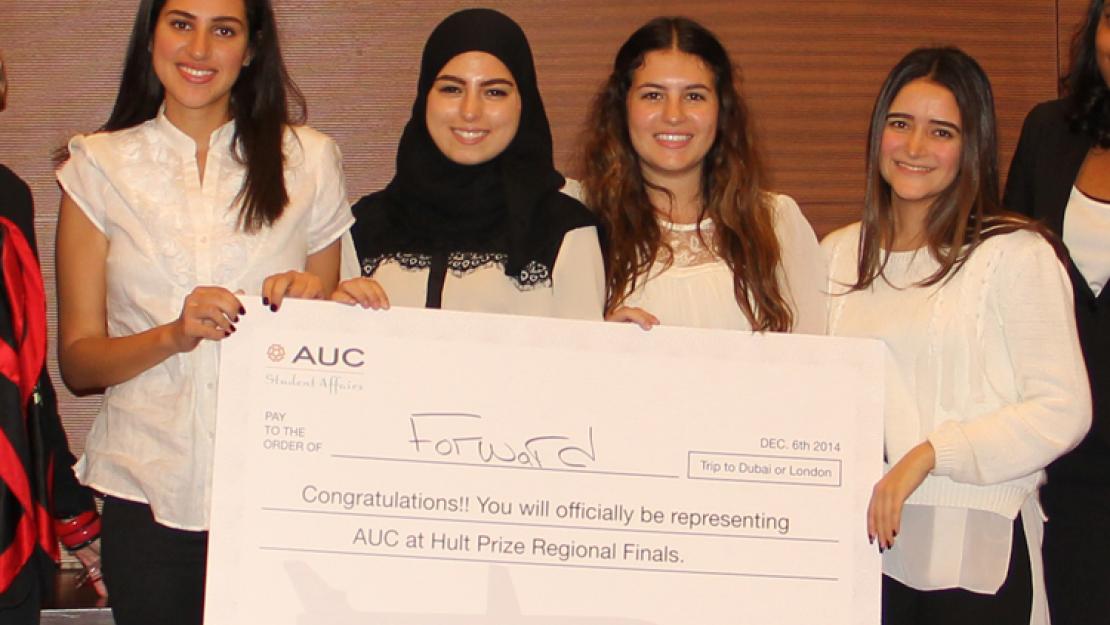 After winning in the local edition of the Hult competition, which was hosted for the first time at the University, a team of AUC students is now advancing to the regional round, which will take place in March 2015 in Boston, London, San Francisco, Dubai and Shanghai. The AUC team will compete in London.

The winning team, Forward, includes marketing students Nouran Soliman, Farah Derbala and Nariman Helal, as well as Yasmeen Abouel-Nour, an architectural engineering major. Trained and advised by the student-run International Conference on Global Economy, which organized the local round on campus, the team presented their solution to this year’s challenge, education in urban slums, by integrating recycling and education. The team's idea is for families to pay for their children’s education in the form of recyclable trash, such as plastic, paper and metals, which will be collected weekly and sold to recycling associations.

“In Cairo, we are surrounded by more than 1,500 slums, so we can easily access these areas for field research and prototyping,” said Alyaa Younis, a public policy graduate student at AUC and campus director for this year’s competition. “We also have the most to gain.”

The Hult competition is the world’s largest student crowd-sourcing platform for social good that awards $1 million in startup funding to a student team that develops the most radical and innovative idea to solve one of the world’s toughest social challenges. Following the regional round, where teams are given only eight minutes to pitch their ideas to the judges and "make an impression," as Younis put it, one team from each city is selected to take part in a two-month summer business incubator program in Boston, where participants receive mentorship, advising and strategic planning as they create prototypes and set up to launch their new social businesses. “Teams are mentored by world-class CEOs, entrepreneurs from all over the world and professors –– people who understand the problem and can help develop an idea,” said Younis, who took part in the Hult competition last year.

At the final round in New York, a winning team is selected by delegates of the Clinton Global Initiative. Former President Clinton presents the winning team members with a $1 million prize, donated by Philip Hult, to kickstart their idea.

A not-for-profit organization committed to social entrepreneurship, the Hult Prize Foundation, in partnership with the President Bill Clinton and the Clinton Foundation, hosts college and university events around the world, encouraging teamwork through its annual competition, which was initiated in 2009. Former U.S. President Bill Clinton chooses one of the world’s major problems each year, and teams of innovators from around the world put their skills together in tackling this issue. The aim of the Hult Prize competition is to encourage social entrepreneurship worldwide and harness the momentum of young, innovative minds.

“It’s a social entrepreneurship revolution,” said Younis. “To ensure high standards of living for all, we need to find better ways to manage our scarce resources. The efforts of the traditional institutions are simply not enough. We need new innovative platforms to offer targeted, scalable and sustainable solutions that would tackle the most pressing social problems.”

The AUC cohort held its opening session on November 2, with more than 200 students in attendance and 34 teams signing up. Mohamed Zazzou, who is on the Forbe’s list of 30 Under 30 for social entrepreneurship, delivered a presentation on his work in the Healthy Egyptians initiative, which works to improve health education in the country.