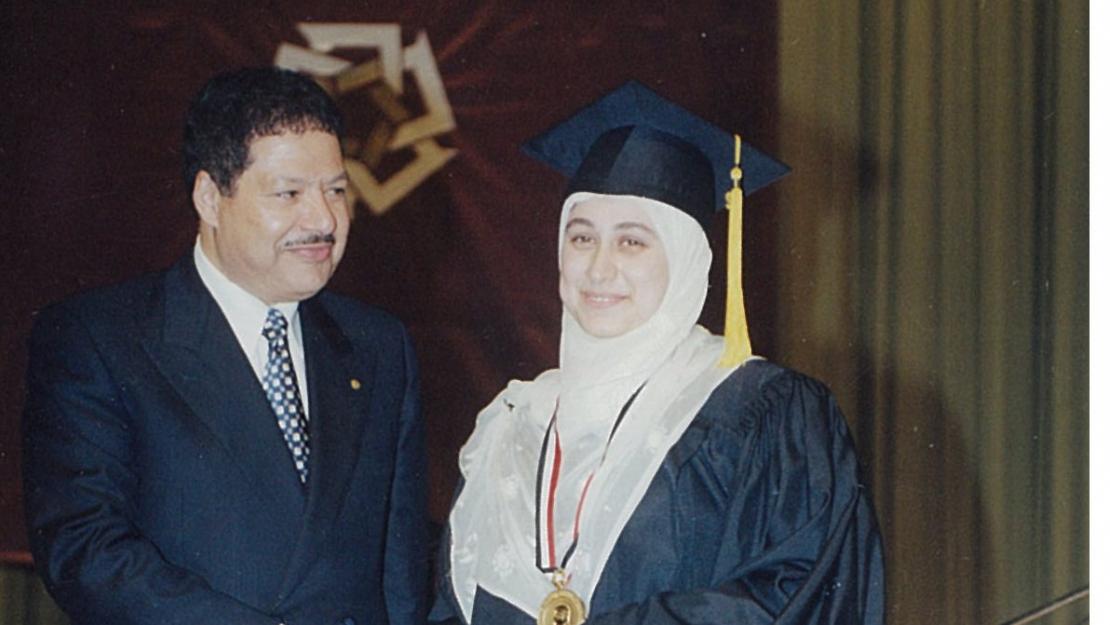 AUC Trustee and Nobel laureate Ahmed Zewail, the Linus Pauling Professor of Chemistry, professor of physics and director of the Physical Biology Center for Ultrafast Science and Technology at the California Institute of Technology (Caltech), passed away on August 2 in the United States. He will be buried in Egypt.

Zewail has a long-standing affiliation with AUC. A member of the University’s Board of Trustees since 1999 and a distinguished visiting professor in 1988, Zewail received an honorary degree from AUC in 1993, as well as the Presidential Medal in 2011 –– given only eight times in AUC’s history –– “to people who have done extraordinary things for the advancement of Egypt and for the human progress of the peoples of the world.” Encouraging inquiry and critical thinking at the University, Zewail established the Ahmed Zewail Prize for Excellence in the Sciences and Humanities to honor distinguished AUC graduates who “demonstrate extraordinary commitment to the pursuit of scientific inquiry and the affirmation of humanistic values.” Given at each AUC commencement, the award was first presented in February 2001 and reflects Zewail's belief that Egypt's future development is based on progress in the physical, biological and social sciences; development of world-class technologies; and a deeper understanding of the relationship between science, technology and society.

“Ahmed Zewail was an extraordinarily esteemed scientist, not only in Egypt, but around the world,” said AUC President Francis J. Ricciardone. "Egyptians and Americans alike are proud to claim him as their own countryman. He personified the magic that can happen when Egyptians and Americans study, work and live among each other in passionate dedication to research, learning and teaching. We at AUC are honored to have shared special affinities with him, and to have benefited from his wisdom and generosity. His lifelong dedication to pushing the frontiers of science and technology for human welfare, and his legacy as a philanthropist, will continue to inspire us all. We will honor his memory by rededicating ourselves to instilling among our students Dr. Zewail's own rigorous quest for knowledge and its application for the benefit of all humankind.”

Born in Damanhur, Egypt as the only son among three daughters, Zewail was raised in Alexandria, where he received a Bachelor of Science in 1967 with highest honors, and a Master of Science in 1969 from Alexandria University. He received his PhD in 1974 from the University of Pennsylvania, after which he conducted postdoctoral research at the University of California, Berkeley. In 1976, he joined the California Institute of Technology as assistant professor, becoming associate professor in 1978 and professor in 1982. He served as Caltech’s first Linus Pauling Professor of Chemical Physics from 1990 to 1997. He also served as director of Caltech’s National Science Foundation Laboratory for Molecular Sciences from 1996 to 2007.

“Ahmed Zewail leaves behind a legacy of extraordinary achievements; he was an icon in the world of science,” said Richard Bartlett, chair of AUC’s Board of Trustees. “He was also an AUC trustee for 17 years, deeply committed to the University’s mission of education and service in Egypt and the region. We will miss his companionship, enthusiasm and devotion for science and scientific progress, and unwavering support of AUC.”

In 2009, Zewail was named by President Barack Obama to the U.S. President’s Council of Advisors on Science and Technology, advising the president and vice president, as well as formulating policy, in the fields of energy, education, health, climate change, the environment and economy. During the same year, Zewail was named the first U.S. Science Envoy to the Middle East.

In 1999, Zewail was the sole recipient of the Nobel Prize in chemistry, making him the first Arab to win the prize in science. The prize was in recognition of his pioneering research in femtoscience, which led to the establishment of femtochemistry as a scientific field. Later that year, Zewail was bestowed Egypt’s Order of Merit, First Class, and the Grand Collar of the Nile, the highest state honor. In addition, postage stamps, “The Portrait” and “The Fourth Pyramid,” were issued in Egypt in 1998 and 1999 in honor of Zewail’s distinguished contributions to science and humanity. A high school in the Egyptian city of Disuq and a square in Alexandria were also named after him in 1998 and 2000, respectively. “I never expected that my portrait, next to the pyramids, would be on a postage stamp or that the school I went to as a boy and the road to Rosetta would be named after me,” said Zewail in a biography published by the Nobel Prize website. “Certainly, as a youngster in love with science, I had no dreams about the honor of the Nobel Prize.”

In 2011, following the January 25 Revolution, the Zewail City of Science and Technology — a dream of Zewail’s since 1999 — was inaugurated, with Zewail as chair. For Zewail, developing a scientific renaissance in Egypt was a long-held aspiration. "The world is moving at a fast pace, and today's Egyptian renaissance will only come about through scientific research," said Zewail, speaking at AUC Tahrir Square to an overflowing Ewart Memorial Hall in Summer 2011. "Nobody has the complete answer to what constitutes proper education, but we need a clear vision for a modern educational system that will raise the efficacy of the Egyptian individual. ... We don't have enough resources such as petroleum as is the case in other countries, but we do have 85 million Egyptians, and the future of Egypt will be built at the hands of those Egyptians. … Change will happen sooner than you think. I have complete confidence in Egyptians, who have always made history.”

Recently, Zewail and his Caltech team developed 4D electron microscopy as a new research field. In recognition of his achievements, Zewail received more than 100 international prizes and awards, including the Nobel Prize, Albert Einstein World Award of Science, Priestly Medal, Benjamin Franklin Medal, Robert A. Welch Award, Leonardo da Vinci Award of Excellence, Wolf Prize and King Faisal Prize. He holds nearly 50 honorary degrees in the sciences, arts, philosophy, law, medicine and humane letters from prominent universities around the globe, including Yale, Cambridge, Oxford, Katholieke Universite, Peking, Heriot-Watt and École Polytechnique Fédérale de Lausanne. In 2011, Zewail received the Top American Leaders Award from The Washington Post and Harvard University for “promoting knowledge-based development and global peace, and linking Egypt and the United States through science.” In 2013, he joined the UN Scientific Advisory Board, and one year later, he served on the President of Egypt’s Advisory Council of Distinguished Scholars and Experts.

Author and co-author of around 600 articles and 16 books, Zewail was an elected member of international academies and societies, including the National Academy of Sciences, Royal Swedish Academy, Royal Society of London, European Academy, French Academy, Russian Academy, Chinese Academy and the American Philosophical Society. He also served on the boards of international institutions and some major corporations. He was a visiting and distinguished professor at prominent universities around the globe and lectured extensively, delivering approximately 500 named, plenary and keynote speeches, in addition to commencement addresses and public lectures.

Expressing his hope for bridging cultures and promoting peace and dignity, Zewail wrote in Voyage Through Time: Walks of Life to the Nobel Prize (AUC Press, 2002, 2004), “The world is now more dependent on all of its parts than ever before in the history of humanity. Both the Egyptian and the American cultures have tasted the fruits of great achievements in their histories. I hope that the harvest of the new century and the new millennium will be bountiful for both of them, bringing about a renaissance to Egypt and a new perspective to American leadership, and for all of humanity. As I’ve said several times, I am an optimist!”