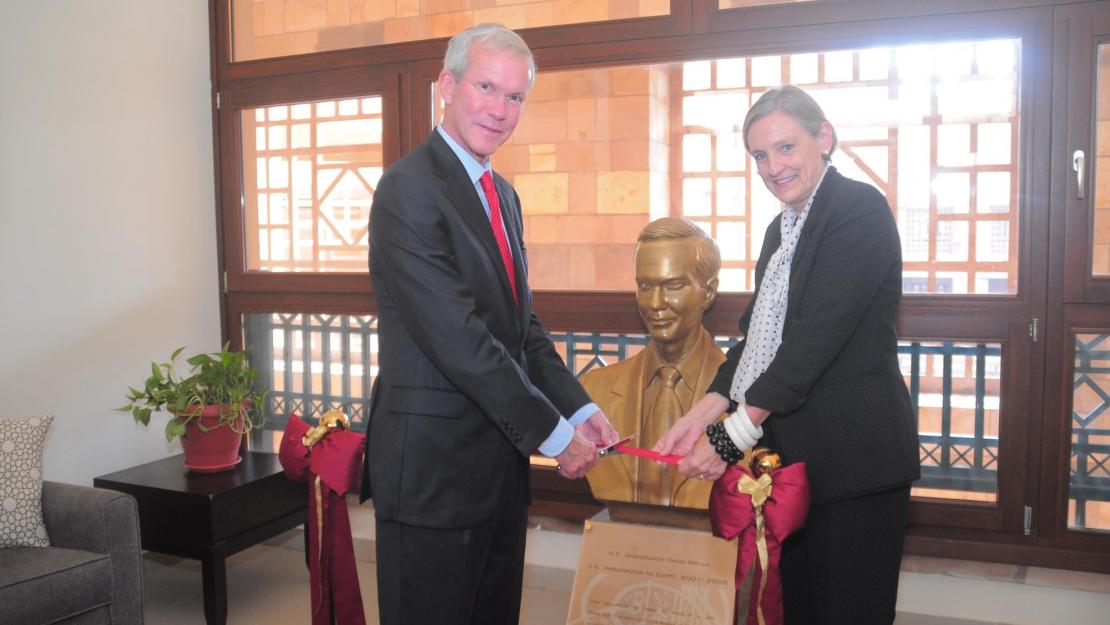 In honor of his contributions to building the New Cairo campus, AUC inaugurated a bronze bust of the University’s longtime friend and supporter C. David Welch, who served as U.S. ambassador to Egypt during the early years of the New Cairo campus project. The bust, which now sits on the second floor of the Administration Building, was commissioned more than 10 years ago by AUC Trustee Moataz Al Alfi, as a token of appreciation for Welch and his efforts in securing the funds to build the campus.

“David has been a friend of AUC for so many years, and we are delighted to honor him today for all of his dedication and commitment to the University,” said Al Alfi, recounting Welch’s role in securing a significant portion of the cost of constructing the campus. “If it were not for David, we would probably have half of the campus built.” Welch served in Cairo from 2002 to 2005, during which time he provided support to AUC in several ways. He played an instrumental role in securing a leadership gift of $100 million from USAID toward the funding of AUC's $400 million, 260-acre campus. He was also a frequent visitor to AUC as a guest and speaker.

After leaving his post as the U.S. ambassador to Egypt, Welch was assistant secretary of state for Near Eastern affairs in the United States Department of State from 2005 to 2008. He is currently the president of the Europe, Africa and Middle East division of Bechtel, the largest construction and civil engineering company in the United States.