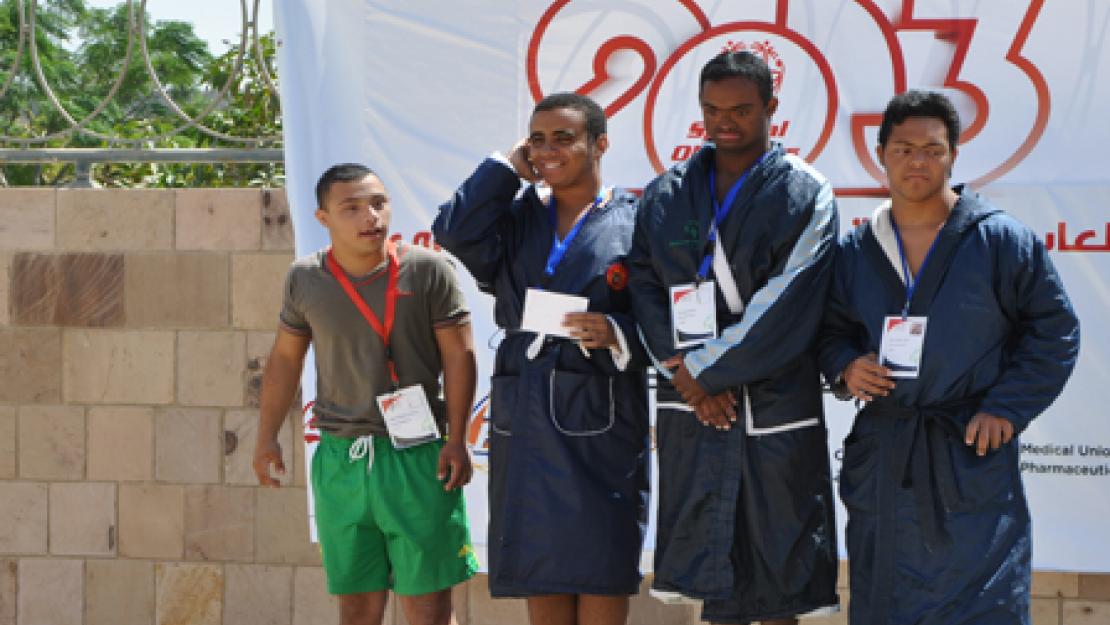 Nada Montasser has been swimming since she was 6 years old, when, according to her mother Neamat Aldhan, one of her aunts noticed that she could “jump into the water without any fear.” Montasser is now 18 and won one gold medal and two silver medals at the Special Olympics swimming qualifiers, held at AUC last week.

For three days, AUC opened up its sports facilities to almost 400 athletes participating in the Special Olympics swimming and tennis qualifier events. Almost 1,400 fans showed up at the event, including family members, coaches and celebrities such as actors Dalia El Behery and Tarek El-Dessouki.

This is the third Special Olympics event at the University. “It has always been AUC’s mission to serve society, and one way to give back to the community is through sports,” said Mohamed Taher, director of AUC’s Office of Athletics, which arranged the opening and closing ceremonies for the Special Olympics qualifiers, coordinated security, and provided facilities and utilities. “AUC’s state-of-the-art athletics facilities are one of the top in Egypt and the region, and our aim is to provide the highest quality of sports services.”

Basma Gomaa, whose daughter Nermeen participated in the swimming competitions, was very pleased with the “gorgeous” facilities at AUC and the organization of the event. Her daughter received a silver medal and a bronze medal at the swimming qualifiers. “Of course, she was very happy, and I was very pleased as well,” Gomaa said.

Several clubs participated in the three-day event, including El Shams, Gezira and Zamalek sporting clubs, in addition to many others. Shereif Hasan Kamel, a coach from the 6th of October Sporting Club, said that his players have been preparing all year to participate in this event. “Our players are very glad to compete with others,” said Kamel, who has been involved with the Special Olympics for 13 years and was grateful to AUC for its role in the event. “I respect The American University in Cairo for such organization,” he said.

AUC has had a long-standing tradition of serving the community through athletics. Last year, the University hosted a run for the Children’s Cancer Hospital Egypt 57357 to support cancer research.

The Special Olympics was established in 1968 and is an international sports organization for people with intellectual disabilities. Throughout the year, the Special Olympics holds competitions for both children and adult athletes.