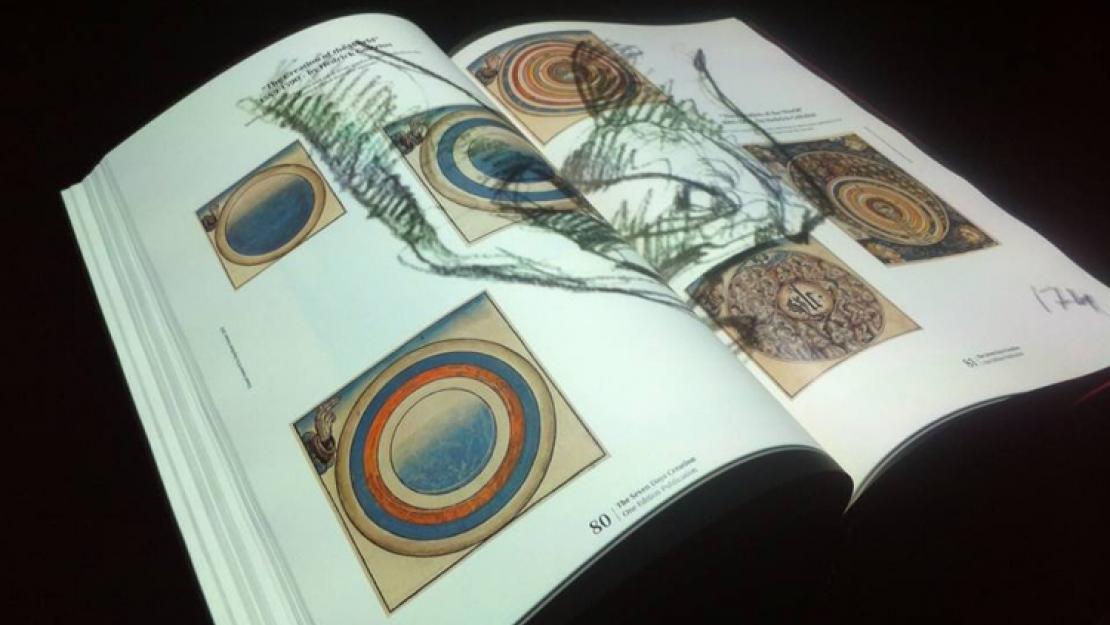 Haytham Nawar, assistant professor of graphic design, was invited to participate in the group exhibition In the Eye of the Thunderstorm: Effervescent Practices from the Arab World and South Asia, as part of the 56th annual Venice Biennale International Art Exhibition, one of the largest and most prestigious events in the global art world.

Nawar joined eight other artists –– two Egyptian –– from around the Arab-speaking world and South Asia. “I saw art that I had studied as a student,” he said. “I was exhibiting beside people who have helped shape modern art history, and I felt honored to see myself as part of it.”

In the Eye of the Thunderstorm was one of 44 collateral events that are independently curated, but selected by the artistic director. The Biennale also includes an international contemporary art exhibition and national pavilions organized by more than 90 countries.

Nawar’s contribution to the Venice Biennale, which runs until November 15, is an interactive installation titled The Seven Days, the Heavens and the Earth. The project is the result of Nawar’s ongoing research on the common threads in world creation myths or stories throughout history and cultures. Nawar compiled the results of his research in a large book. “It starts with ancient Egypt then follows a historical timeline to the Abrahamic religions,” he explained.

The pages of the book include texts and images pulled from mythological, religious and historic sources to create a visual timeline of the myth. By organizing the information in the form of a book, Nawar, and the viewer, is able to see the aesthetics of this myth side by side. “It was very interesting to compare these visuals and see the interpretation of the myth of creation throughout civilizations with respect to religions,” noted Nawar. “It’s fascinating to see that it’s almost the same story, just different interpretations, with different names, locations and times.”

To encourage viewers to further consider the notion of creation, Nawar employed an amateur sculptor to recreate elements from each of the seven days of the creation myth in clay or ceramic. He filmed the sculpture’s hands struggling to articulate these ideas in form and produced a number of sketches, from which he created several short animations. As visitors flipped through the book and considered the research, the animation of the hands shaping the sculpted objects is overlaid on the pages. The actual sculptures are displayed in a glass display box underneath the book.

By capturing the creative process of an amateur sculpture, Nawar further dissects the phenomenon of creating something complex out of virtually nothing, and bringing form to ideas.

While the installation is focused on creating stories in religious traditions, Nawar insists it is more an exploration of ancient lore, which has become an integral part of how many people understand the world and the nature of the universe. “For me,” said Nawar, “it’s not about history, and it’s not about religion. It’s about the myth.”

The exhibit In the Eye of the Thunderstorm explores the unique position of artists in the Arab world, who –– according to the curator, Martina Corgnati –– are often at the center of political, religious or social turmoil in their native countries. However, like the eye of the storm, these artists remain independent and calm in the center of the chaos, positioned to make thoughtful artistic works to comment on the situations around them, as Corgnati described it.

“They are totally ‘inside,’ embedded in the core,” Corgnati wrote on the exhibition’s website, “and, nevertheless, they remain ‘outside,’... processing both chronicle and history, scrutinizing the present as well as the past.”