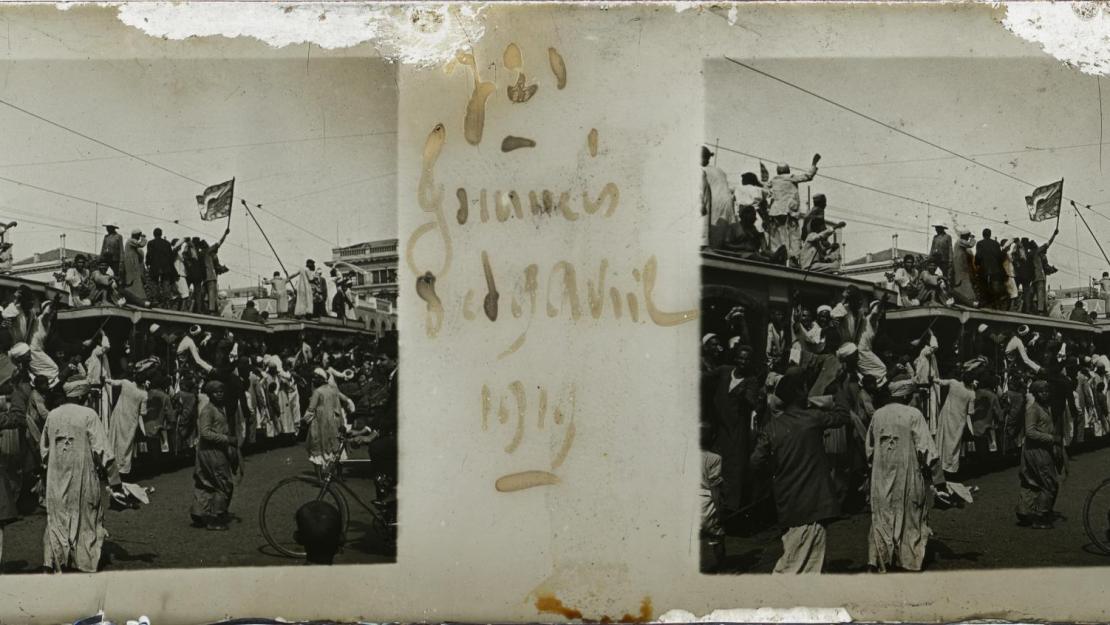 AUC’s Rare Books and Special Collections Library recently digitized and made accessible a collection of photographs from the early 20th century, featuring a series of images that document major events throughout Egyptian history, such as the 1919 revolution, with its anniversary approaching on April 8 and 9; the Flower Festival of 1914; the coronation and burial procession of Sultan Husayn Kamil, who ruled Egypt from 1914-1917; and other scenes depicting everyday life in Egypt at the time.

“It is a really neat collection because it allows one to trace the development of Cairo over time and can act as a comparison to modern-day Cairo,” said Mark Muehlhaeusler, director of Center of Excellence for Middle East and Arab Cultures at the AUC Library, indicating that shop signs in different languages represent an international community present in the city. “Cairo appears to be very international at the time, much more so than it is today. The cosmopolitanism of Cairo translates very clearly in these photographs.”

The 48 photos of the 1919 revolution, with groups marching and protesting in the street appear to have been taken from a balcony. Kouba noted that it is difficult to make many historical conclusions because of the distant vantage point, but the photos “help to create a visual and imagine what the protests were like at the time.”

The photos feature people marching, holding placards and banners. “What does strike me is that the demonstrations appear quite orderly for a revolution,” shared Muehlhaeusler. Most of the slides portray protesters simply standing or walking.

Just a year ago, while browsing through an antique shop in Maadi, Muehlhaeusler stumbled upon a 20th-century Taxiphote machine, a mechanical device used for viewing three-dimensional photographs. Each slide is composed of two photos, side by side, taken from different angles so as to create the illusion of three-dimensionality when the slide is viewed through the lenses of the machine. Along with the machine, Muehlhaeusler was able to acquire a series of 800 stereoscopic slides, a collection of photographs taken between the years 1913 and 1921.

“The photographs provide us with snapshots of social life in Egypt at the time and the unique aspect of these slides is that they are a personal collection, so they don’t exist anywhere else outside of AUC,” shared Ryder Kouba, digital archivist, who was responsible for managing the digitization of the collection. The images seem to indicate that the photographer was of a high social class, noted Muehlhaeusler, indicating that a villa and car can be identified in the photographs, which depict the photographer’s travels to France each summer.

“The photographer of this collection was actually particularly organized, writing brief descriptions in French and numbering each slide,” Kouba said. This helped to make the process of digitizing the photographic slides a relatively quick one.

“An interesting point to put across is that digitizing does not just mean scanning a photograph,” noted Muehlhaeusler. It is also the challenging and time-consuming process of creating the metadata, or descriptive data, to accompany the digital collection, he said.

“We try to anticipate how scholars might use the material and try to make the images accessible for that purpose,” explained Muehlhaeusler. “It can be a bit of a challenge because we can’t serve all potential purposes in the same way.”

“These photographs lend themselves to serious study because they do portray everyday street scenes and average daily life,” said Muehlhaeusler. He noted that the material could be of use for an architectural study, allowing one to concentrate on the buildings and monuments highlighted. It might also be of interest to someone in migration studies. “There are many images of migrants coming to Egypt from France, which is a total reversal from the present day where we see people crossing the Mediterranean to the other side,” he noted. 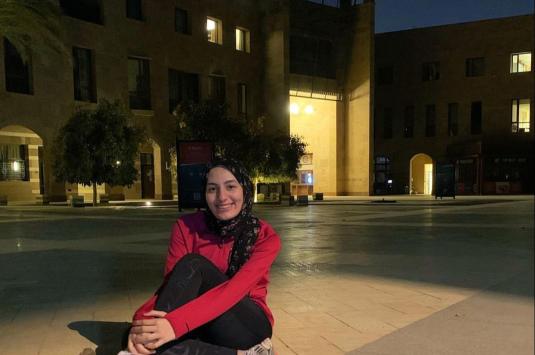