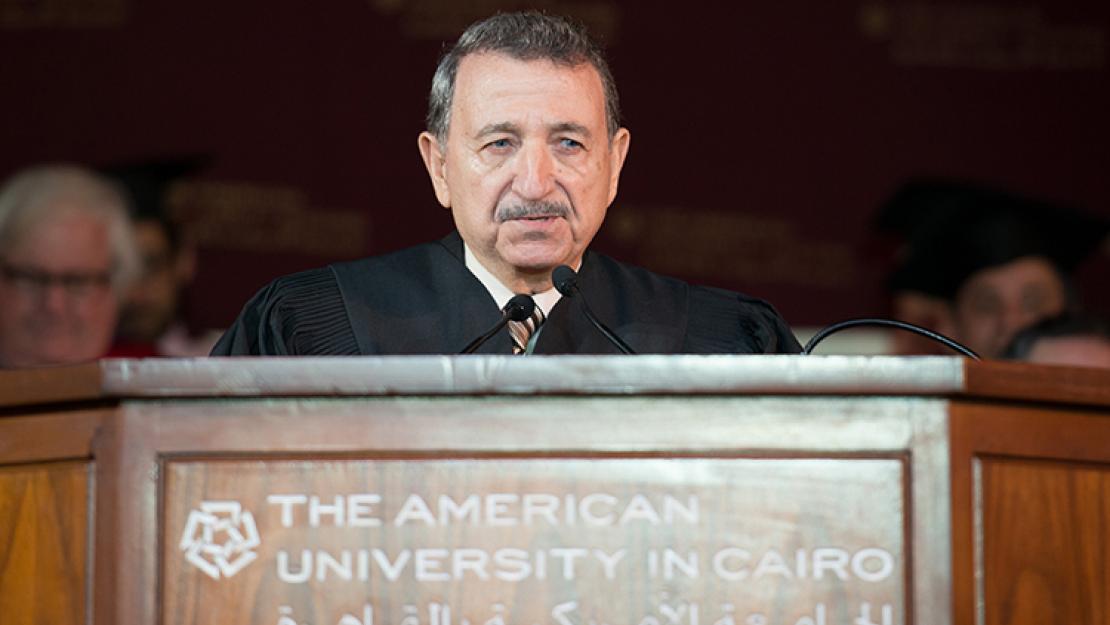 Good ideas are the starting point to make life better for the average Egyptian –– ideas that help create jobs and bring in money, said Mostafa El-Sayed, Julius Brown Chair and Regents’ Professor at the Georgia Institute of Technology’s School of Chemistry and Biochemistry, who was awarded an honorary Doctorate of Science from AUC at the 92nd annual commencement.

“Education is to think: How can I make this country better? –– economically better, and [that] is done by ideas, good ideas, that can create jobs and have you hire a lot of people [to implement] what you have in mind,” said El-Sayed, who was the keynote speaker at the undergraduate commencement. “Because you are the people who could do that. It’s not going to be the average person in Egypt. It’s going to be the educated person, especially from a school like AUC. … Egyptian people are the most creative people in the world, … [and] I’m sure from the faces I see here that Egypt is in good hands.” To watch El-Sayed's full speech, click here.

Addressing her classmates, Zeena Amin ’15, a political science graduate, noted how the pieces of their life puzzles are beginning to come together on a day like this. “This is when the pictures would be forming, if our lives were puzzles,” she said. “We are embarking on the ‘rest of our lives.’ From elementary to high school, this is when everything unravels, in all its imperfect beauty. And while that can be terrifying, there is nothing more exciting. For with big responsibilities comes big independence. With bank notes comes the power to make change. With great expectations, great potential is released.”

The undergraduate commencement saw the graduation of 540 bachelor’s degree candidates, of whom 90 graduated with honors, 105 with high honors and 91 with highest honors. The President’s Cup, given to those who rank highest in the graduating class, was presented to three students who all earned a 4.0 GPA: Islam El-Tayar, computer engineering; Hana Marei, economics; and Noor Akroush, construction engineering. The Parents Association Cup, presented to a student who has demonstrated unusual capability in blending academic achievement with a major contribution to student activities, was awarded to Efrayem Refaat, a business administration major, whereas Mohamed Eissa, a swimmer who majored in economics, received the Omar Mohsen Athletic Achievement Cup.

Other awards included the Ahmed El Mehallawi Family Award, given to Hanin Aboutaleb, mechanical engineering, for demonstrating strong academic achievement and a commitment to community service; Ahmed H. Zewail Prize for Excellence in the Sciences and Humanities, received by Haitham Kandeel, chemistry; Nadia Younes Award for Public and Humanitarian Service, given to May Seoud, political science; Student Government Cup, presented to Salma El-Lakany, architectural engineering; Dr. Abdel Rahman El Sawy Award for the highest-ranking student in the engineering department who has been a Public School Scholarship recipient, earned by Samah Ahmed, computer engineering; and Samiha El Barkouky Award in Egyptology, given to Masamune Nakagawa, Egyptology.

At the graduate commencement, Sheikh Hussein Al-Banawi, chairman and chief executive officer of The Industrial Group and author of The Unknown Leader, explained to graduates that leadership is a lifetime journey where wealth should not be the ultimate goal. “Leadership often begins with an aspiring dream, and the most powerful dreams aren’t about wealth,” he affirmed. “I’ve rarely seen people who aim purely at wealth end up happy. What intrigues and inspires us in the stories of people we admire is generally not the money they may have accumulated, but rather the goals they attained, the obstacles they overcame and the legacies they left behind. These are what make a story worth repeating. The scars of battle are far more captivating and impressive than the medals of victory.”

Al-Banawi argued that leaders, “are not born; they are developed and, as such, they are self-developed.” He then went on to explain nine steps in the journey of self-discovery that aspiring leaders must undertake:
1) Discover what makes you tick, what drives you internally.
2) Listen to feedback of all colors.
3) Invest in yourself for lifetime learning.
4) Savor the sweet taste of failure.
5) Find a mentor, and you’ll find a treasure trove for life.
6) Weave a supportive network the right way.
7) Develop a magnetic personal voice.
8) Take time for reflection.
9) Don’t rush the process of self-development.

“If you practice the principles I’ve described today and discovered,” he noted, “you’ll come to understand the deeper meaning of the word career. It’s not about mainly finding a job, getting paid a lot, or having easy and pleasant work to do. It is about discovering the leader in you.”

Master’s degrees were awarded to 127 candidates at the graduate commencement, and one PhD was earned by Irene Gabriel, mechanical engineering. The 25th of January Award, which recognizes an AUC graduate student for outstanding thesis work on a topic related to democracy, human rights, citizenship or sustainable development in the Middle East and North Africa, was presented to Farah Kobaissy, a master’s candidate in gender and women’s studies, for her thesis, “Organizing the Unorganized: Migrant Domestic Workers Labor Union Organizing in Lebanon.”

Emphasizing how the University provides more than just an academic education, Rana Abbas (MSc ’15), class representative who graduated with a Master of Science in environmental engineering, noted, “Not only does AUC place its graduates in the league of society’s top performers and contributors,” she said, “but it also actively supports their efforts after graduation. As a struggling entrepreneur, AUC has contracted my solar energy startup to build its first solar plant here at the New Cairo campus. This project put my company in a position to actively participate in shaping the renewable energy industry in Egypt.”

As AUC President Lisa Anderson noted, the Class of 2015 has witnessed and endured a lot, and that is what makes them special. “The graduates in this class have known little but turmoil during their time at University, and they have proven themselves adaptable, persistent and creative in turning the unexpected to their advantage,” she said. “These are life skills that, as much as anything they are taught formally, we hope our students learn well, since they will serve them well as they encounter the unanticipated and unforeseen opportunities of the future.”