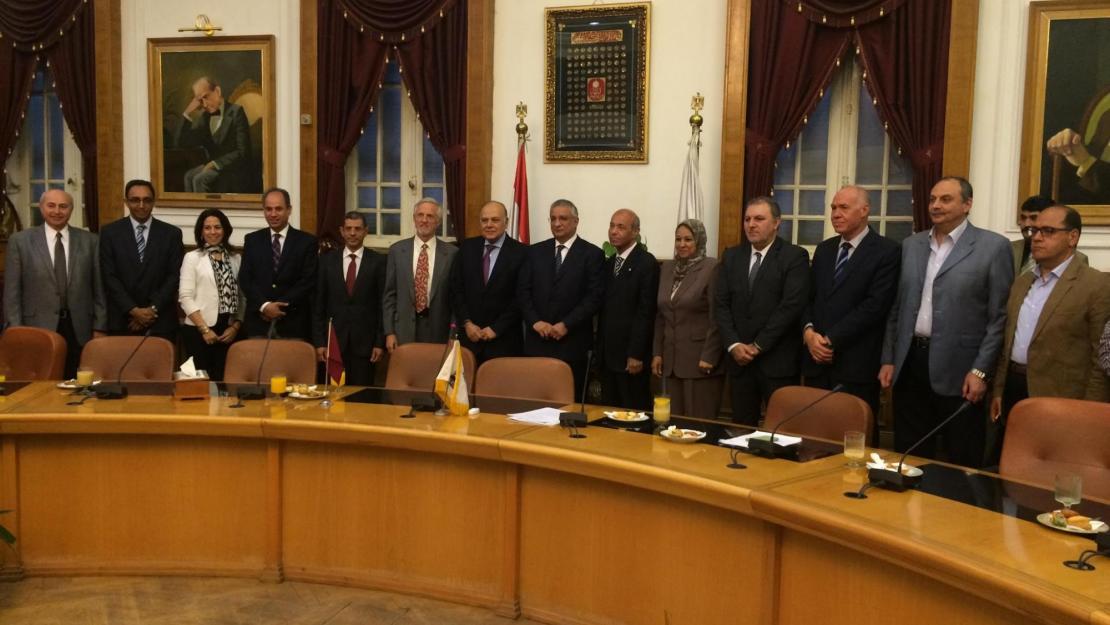 As part of the Neighborhood Initiative recently launched at AUC, Universities and their Neighborhoods: An AUC-AUB Conversation, which aimed at highlighting the responsibilities of universities to their local communities, AUC and the Cairo governorate signed a memorandum of understanding (MoU) to promote sustainable urban development.

Under the terms of this agreement, AUC will work with the Cairo governorate in various urban development projects, including urban design and policy, affordable housing, heritage and conservation, as well as community and social activity mapping. The agreement also supports the management of: urban assets, urban sustainability and real estate; solid waste; infrastructure design; and project construction, in addition to seeking external funding for joint projects.

“The main goal is to create a successful initiative that improves the conditions we currently live in,” said Khaled Abdelhalim, assistant professor of urban policy in the Department of Public Policy and Administration and co-principal investigator of the project with Khaled Tarabieh, assistant professor of architecture. “Cairo needs to revive itself and become sustainable. We all suffer from not having a livable city in terms of mobility, living, and comfort in our residences and commercial activities.”

The Neighborhood Initiative, organized in collaboration with the American University of Beirut and supported by the Ford Foundation, was developed based on the idea that institutions have a relationship with the city and communities around them. “The initiative builds on the concepts of anchor institutions and community engagement to create a just, livable and diverse neighborhood in the vicinity of the University’s two campuses,” said Magda Mostafa, associate professor in the Department of Architecture and principal investigator of the project. “Such neighborhoods throughout downtown Cairo can be developed through the institutional participation and civic engagement.”

The Neighborhood Initiative symposium served as a formal opportunity for AUC to initiate a conversation with the Cairo governorate about the aim of the project. “The governor’s response was that AUC’s neighborhood exceeds the vicinity of the University and extends to the city of Cairo as a whole,” said Mostafa. “This encouraging perception from the governor paved the way for the preparation of a wider scope of collaboration between the University and the governorate.”

According to Abdelhalim, the role of the government in this new partnership is to provide institutional support. “For example, they should be able to provide technical drawings from their archives or facilitate work in Cairo’s neighborhoods in order for AUC to implement urban projects,” he said. “AUC, on the other hand, will assist the governorate with technical and academic support from almost every discipline. This can be in the form of research, projects and consultation.”

With only less than a year since the Neighborhood Initiative symposium took place, AUC has already contributed to urban upgrading projects in downtown Cairo. “Former governor of Cairo, Galal Saeed, invited one of the Neighborhood Initiative delegates to participate in the Committee for the Urban Rehabilitation of Khedival Cairo,” noted Mostafa. “One of the upgrading projects that have recently taken place is the façade renovation of the Lycée Français School, adjacent to AUC Tahrir Square. The Lycée Français project was made possible through the support of AUC and the Cairo governorate, as well as corporate sponsorship by Abraj Misr Urban Development. ”

To secure funds for urban development projects in Cairo, AUC and the Cairo governorate recently applied for financial support through the Rockefeller Foundation’s 100 Resilient Cities program, for which Dr. Basil Kamel, Professor in the Architecture Department is Principal Investigator. “The Rockefeller Foundation supports 100 cities around the world to help develop strategies that would make them resilient to 21st-century challenges such as climate change and natural disasters,” stated Abdelhalim, Kamel’s Co-PI, along with Magda Mostafa. “Without the consent of the governorate to participate in this project, AUC wouldn’t be able to apply for the fund since it requires government participation.”

The proposal is currently under evaluation and, if secured, will provide up to $1 million in financial support. “The fund will support Cairo to become more resilient to the physical, social and economic challenges that are growing in the country,” said Mostafa.

For Abdelhalim, AUC holds a responsibility to promote interdisciplinary thinking in order to address the challenges facing Cairo. “Beyond educating the next generation of citizens, it’s important for AUC to align with the Neighborhood Initiative’s strategic objectives in advancing education, research and outreach engagement in Cairo’s underdeveloped communities,” he said.

While the city of Cairo suffers from urban development issues, it can be viewed as a rich research lab where many topics can be explored, not only in the urban field, but also with regard to social dynamics and migration, noted Abdelhalim. “Cairo’s development complexities give the University a major advantage in promoting civic engagement,” he said. “If we ask how Egyptians will benefit from this agreement, we need to think that almost a quarter of the population is suffering from underdevelopment and unequal distribution of resources.”