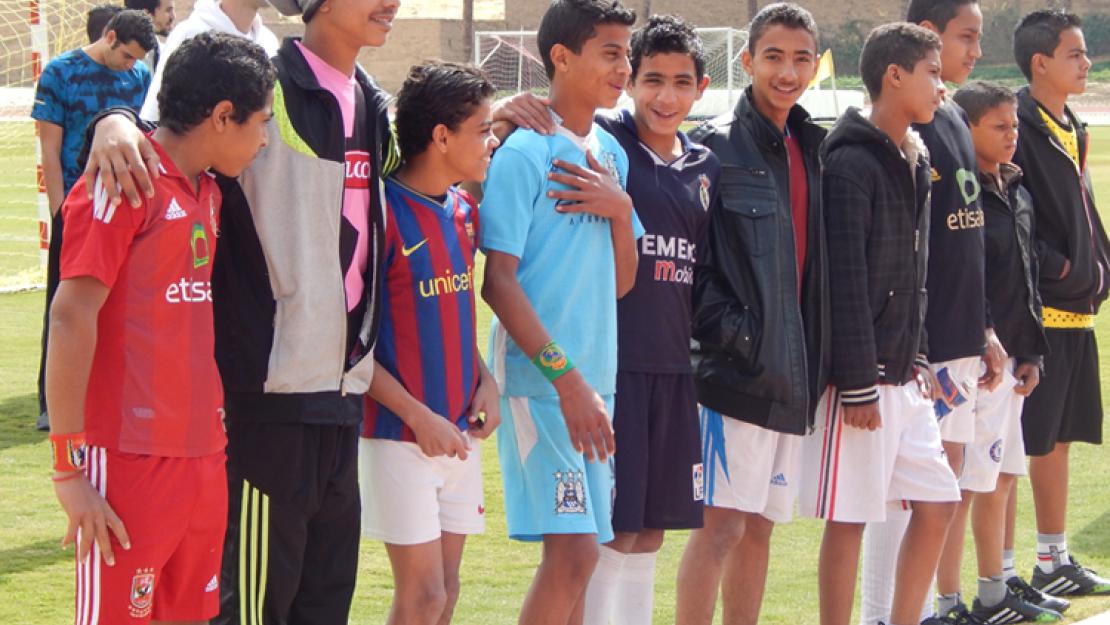 At AUC’s Khalaf Ahmad Al Habtoor Football and Track Stadium, a team of Egyptian street children took to the field to practice soccer twice a week. Trained by AUC alumni and University sports coaches, these children took part in the Street Child World Cup tournament, which was held in Brazil from March 30 to April 6. Not only has this initiative given this group of young soccer players something to look forward to and keep them off the streets, it has also provided them with an opportunity to be noticed and valued.

“Our first aim was to get children out of the streets, to give them something to come back to, and the NGOs that we worked with found that every single kid has stayed with them since we started this initiative,” said Mohamed Abouhussein ‘09, an AUC alumnus and one of the coaches training the street children. “We also want to give these boys the chance to be valued and know that they exist.”

The idea began when AUC alumni Karim Hosni ’05 and Mohamed Khedr Baydoun ’06, who have been coaches for the AUC men’s soccer team since 2008 and have been able to lead the University team to three tournament victories, decided to form a soccer team for Egyptian street children after attending a lecture about the Street Child World Cup movement while they were in London, where the AUC team was preparing for a tournament. “Other than the University team, we always had a vision to do something more with soccer,” Hosni explained. “And when we heard about the Street Child World Cup in the summer of 2011, right away, it clicked with us.”

In 2012, Hosni met with a representative from the Street Child World Cup, the global movement for street children that was established in 2010, to learn what it would take to form an Egyptian team. “We learned that the boys had to have lived at least two years in the streets and at least a year in a shelter to be able to cope with the experience of playing with a team,” Hosni explained.

Hosni began to collaborate with several nongovernmental organizations, including Hope Village Society, Ana El Masry (I am the Egyptian) and Face for Children in Need, in order to find boys who could join the team. He was able to find players like Khaled, 14, who is passionate about soccer, but didn’t have many opportunities to play his favorite sport because he had been homeless since he was 7 years old. “A street child has been through a lot in his lifetime, and that’s a big challenge,” said Abouhussein, who used to play for AUC’s soccer team. The coaches had to deal with behavioral and attitude issues, but, as Abouhussein noted, “There is no stronger power than soccer.” The team had been practicing twice a week on various fields throughout Cairo. But last semester, Hosni worked with Enactus AUC to gain access to AUC’s facilities. “Our first practice at AUC was a big milestone because it was a step up from the facilities we were used to playing on,” he said. “The team was very happy to see such a facility because this equipment is a lot closer to what they experienced in Brazil. For us, as the coaching team, it felt like we were home.” The team held practices at the Khalaf Ahmad Al Habtoor Football and Track Stadium, where they have also played matches against other teams and have been able to meet the famous soccer player Mohamed Aboutreika, who joined one of the team’s practices in January. In addition to Hosni, Baydoun and Abouhussein, AUC alumnus Mourad Hakim also coaches the street children. AUC’s presence has been intertwined not only with the facilities and the coaching staff, but with other volunteers as well. Engy Hosni and Malak El Ayouty ’13 have been involved in the initiative’s public relations team. El Ayouty decided to participate because of her passion for sports and helping children. After spending four months with the team, she has been amazed by its impact on the children. “They have changed so much in the past few months,” she said. “They are so open with other people. Sports take away any negativity.” Not only has this team made a difference in the players’ self-image, but it has also made an impact on how people view street children. “This experience has definitely changed people’s perceptions toward street children,” Hosni said. “People look at them and see that they actually do amazing things, that they can actually achieve something with the right support. These children are very smart, and if you manage to channel this smartness in the right direction, they can be guided toward something positive. They are like unpolished gems.” The team competed in several matches to prepare for the tournament in Brazil, and on March 1, Street Child World Cup: Egypt paired up with the student groups Train for Aim and Enactus AUC for a tournament at AUC New Cairo. For more information,click here. Emphasizing the importance of providing such opportunities for street children, Hosni said, “The whole team has really progressed, and we’ve been getting great feedback from the NGOs about the improvement in their attitude and confidence. If you give someone confidence and hope, anything is possible.”