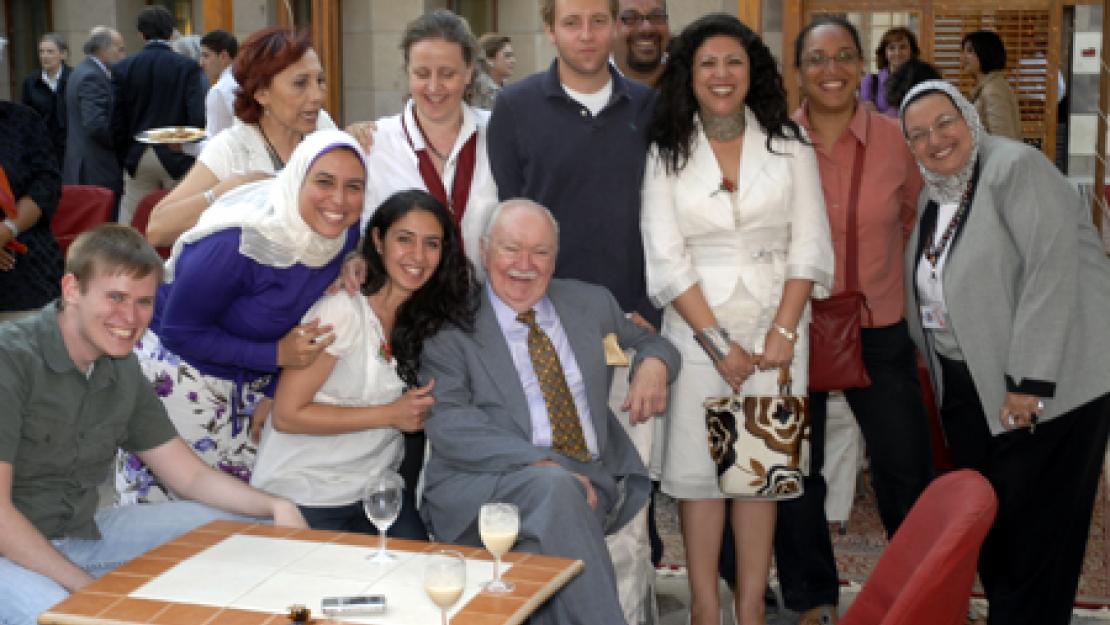 Professor emeritus in the Department of Arab and Islamic Civilizations (ARIC), the late George T. Scanlon (1925 - 2014) was a pillar in the ARIC department and AUC. He was fundamental in establishing the University’s program and curriculum in Oriental and Arabic and Islamic studies, especially within his field of Islamic art and architecture. Under his guidance, numerous generations of students have graduated and gone on to pursue successful careers in various corners of the globe.

Commemorating Scanlon’s great work in the field of Islamic art and architecture, his former students and AUC alumni decided to undertake an initiative to establish the George T. Scanlon Graduate Student Award in Arab and Islamic Civilizations, a merit-based award to recognize a distinguished MA thesis produced by an ARIC student in that given academic year.

“As we count ourselves among the privileged graduates who benefited from Scanlon’s dedication to his students and his multidisciplinary approach to the study of Islamic culture and history, we are committed to fortifying his most noble of characteristics by encouraging the research of future generations of historians following in the tradition that he helped establish at AUC,” wrote his former student Iman R. Abdulfattah (MA) ’04, PhD candidate at the University of Bonn and Islamic art historian at the Ministry of Antiquities, and Noha Abou-Khatwa ’98 ’01, PhD candidate at the University of Toronto and director of the Islamic Art Network, Thesaurus Islamicus Foundation, in their appeal to former students of Scanlon. The George T. Scanlon Graduate Student Award in Arab and Islamic Civilizations has so far raised more than $25,000.

Scanlon’s former students want to ensure that their mentor and dear professor’s name, memory and scholarly contributions are kept alive and thriving for years to come at AUC. “Such a prize recognizes Scanlon’s multidisciplinary approach to his various areas of expertise, but also ensures that he continues to be recognized in posterity for his manifold scholarly contributions,” said Abdulfattah. “It also shows a commitment to students, which was one of Scanlon’s most admiring attributes as an educator.”

Pioneering professors and mentors are an important part of AUC’s legacy. Faculty members like Scanlon made Cairo their home and AUC their family.  Commemorating scholars like Scanlon through named gifts and prizes is one way of keeping their names alive. “Much like the medieval waqf system, which Scanlon taught us, kept the memories of past rulers and sultans alive on buildings and material objects they patronized; named prizes are another way of immortalizing our mentors, through a perpetual academic and intellectual lineage,” said Amina Elbendary ’96, ’00, Scanlon’s former student and associate chair and assistant professor of Arab and Islamic civilizations at AUC.

Scanlon’s 50-year teaching career at AUC has made an immense impact on all his students, scholars, fellow colleagues and researchers, and everyone who even encountered him briefly. He is remembered by his students as “opinionated, a wonderful teacher, great scholar who was incredibly generous and genuinely interested in his students” said Abdulfattah.

Building on from the work of the very famous K.A.C Creswell, Scanlon established a strong program in Islamic art and architecture at AUC. Several of his former students went on to become important scholars in the field. The theses they produced for their master’s degrees remain important works, which created a very strong reputation for AUC and the ARIC program. “Scanlon was one of the earliest scholars to bring archeology to Islamic studies. So, unlike Egyptology, Arabists were not traditionally trained to work with material culture much less to pursue archaeological work. He was a pioneer at that, and several of his students trained with him on site,” added Elbendary.

Scanlon made learning at AUC more exciting and his love of Cairo, its monuments and history was contagious. “His impact was immense on steering interest to Islamic archeology in Egypt,” said Abou-Khatwa. “His analysis of what he excavated was brilliant and this is why it is indispensable to the study of medieval Egypt, as it filled in a lot of blanks. Most importantly his work documented and thus preserved for us the first Muslim city.”

Scanlon’s main life achievement was teaching and his relationship with students. “We want to keep that link with students going … as he used to say, ‘Keep the Faith.’”

Born in Pennsylvania on April 23, 1925, George T. Scanlon paved the way in areas as wide-ranging as salvage archaeology and scholarly writing. Throughout his career, he has been affiliated with several academic institutions in the U.S. and the UK including Princeton University, the University of Chicago, the University of California at Berkeley, Harvard University, St. Anthony’s College in Oxford, the University of Michigan, and the American Research Center in Egypt (ARCE). He first joined AUC during the academic year 1957 - 1958 and then returned in 1974 as a visiting professor of Islamic art and architecture; he was tenured in 1975 and continued to teach here until 2011 when he chose to retire.

A prominent American art historian, Scanlon was honored by the Egyptian Supreme Council of Antiquities (Ministry of Antiquities today) in 2010 for his excavation work in Nubia and Fustat, and his publications related to these projects. Scanlon is the first non-Egyptian, medieval archaeologist to receive such recognition. Scanlon began working on the excavation projects in Nubia and Fustat in the 1960s, where he spent three seasons working in Nubia as part of the UNESCO campaign that aimed to salvage the archaeological sites threatened by the construction of the Aswan High Dam. As head of the American Research Center in Egypt at the time, Scanlon was eventually approached by the director of the then Egyptian Antiquities Service to assist with excavation and preservation efforts focusing on Islamic art and architecture in Fustat.

Scanlon anonymously endowed the annual George Antonius Memorial lecture at the Middle East Centre of St Antony’s College, now in its 37th year; he also gave generously over the years to key institutions that supported the study of the Middle East, such as the American University in Beirut and Middle East Medievalists. However, the Rare Books  and Special Collections Library (RBSCL) at AUC, his official home for the past 40 years, is where his spirit continues to reside. In 2008, Scanlon donated his personal papers, correspondences and the diaries that he has kept over the years to RBSCL.