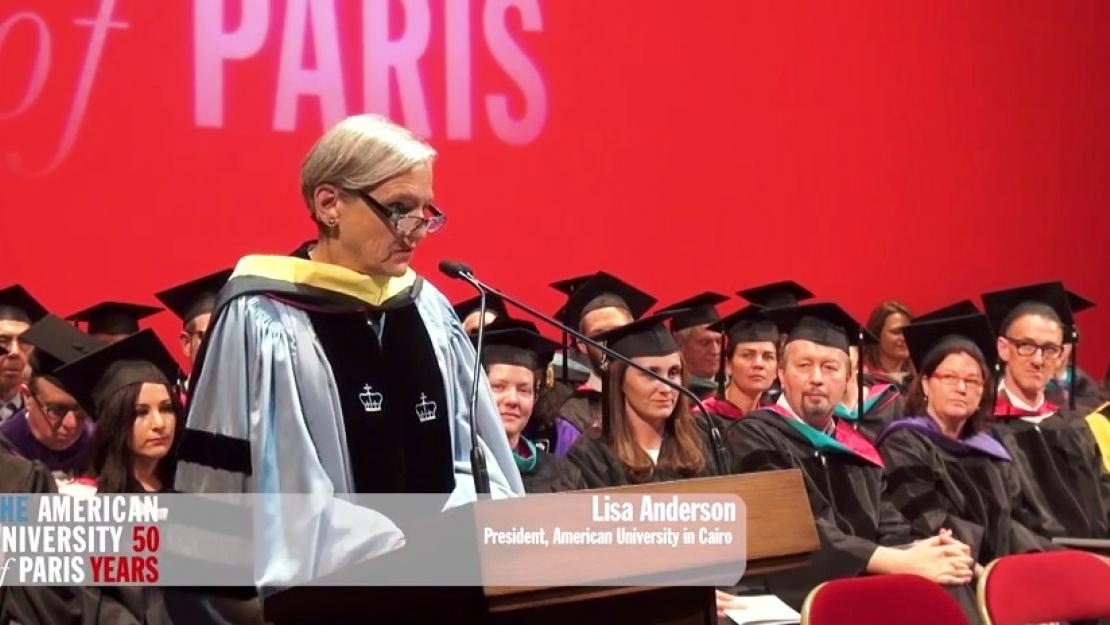 President Lisa Anderson was awarded an honorary degree by AUP for her contributions and accomplishments leading AUC through its past years.

AUC President Lisa Anderson has recently received an honorary Doctorate of Humane Letters from the American University of Paris (AUP) during its 2015 commencement.

Anderson was awarded for effectively leading AUC during the 2011 revolution and for the University continuing “to serve as a model of commitment to student learning through the tumultuous years that followed,” as described by Celeste M. Schenck, AUP president, during her commencement speech.

“You, Lisa Anderson, barely three weeks into your tenure as president of The American University in Cairo, faced the challenge of leading the University during the biggest popular uprising in Egypt in nearly a century,” Schenck declared. “Within days of the departure of the country’s president, AUC resumed classes — the only educational establishment to operate in Egypt for nearly six weeks. … We honor you, Lisa Anderson, for inviting each of the presidential candidates to campus to speak, and for fostering in your students their own political voices; when they used those voices to hold a strike at the University in 2012. You worked with moderate students to establish dialogue with the protesters and to resolve your differences without the intervention of the police. As a result of your leadership, your expertise as a political scientist, and your determination to make the University into a space of democratic dialogue and debate, The American University in Cairo responded to the revolution and its aftermath with powerful teaching, to chaos with an orderly return to daily life and to challenge with compassion.”

Anderson was among three honorary degree recipients from the fields of arts and education, including Margee Ensign, president of the American University of Nigeria, and Benjamin Millepied, French choreographer and director. Schenck described Anderson and Ensign, both members of the renowned American Academy of Arts & Sciences, as “feisty, entrepreneurial, compassionate, pragmatic yet idealistic, generous, forthright, self-reflective human beings.  They have each embodied leadership at the helms of their universities, facing down history in a host of ingenious and creative and generative ways when crisis or revolution or devastated populations stood just outside their university gates.”

Anderson: "Use Your Education to Save Us All"

In her speech, Anderson thanked Schenck and AUP for the “privilege of joining the ranks of [its] honorary alumni.” Addressing graduates, she said, “You are the product of decades of investment,” but was quick to point out that today’s world is uncertain and the future is unpredictable.

“We have been equipping you for a life that we cannot imagine,” Anderson noted. “We have no idea what the world will be like when you are our age.”

Nevertheless, she gave two timeless pieces of advice:
1)    Think for yourself
2)    Use your education to save us all

“What happened in Egypt in the … days of the January 25 Revolution is happening everywhere,” Anderson affirmed. “In many ways, we are living through a global revolution, and the world is becoming a free country, even if all the countries in it are not. And this will require that the citizens of this new world think for themselves. We, your families, friends and faculty, certainly cannot tell you what to think about what we ourselves cannot imagine. So, more than facts and figures, more than ideas and techniques that you may have learned at your time at AUP, I hope you have discovered how to think for yourselves, how to have opinions, how to nurture a disposition of independence, agility and mindfulness, because as much as anything else you have been taught, this is what you will need to have learned. … You think for yourself, and all of us –– your family, friends and faculty –– will benefit from that.”

Moving to her second piece of advice, Anderson asked graduates to redeem the investment made in them by faculty, family and friends by continuing to use their capacity to think for themselves. “Your education is, as your grandparents undoubtedly told you, the one thing that they, whoever they are, can’t take away from you,” Anderson said. “The world may be uncertain, and it may be more challenging over the course of your lifetime than any of us know now, but helping you refine the capacity to think for yourselves at an institution like AUP is the best possible investment that anyone could have made in your future, and all those who made that investment will need you. …Use your education to save us all.”